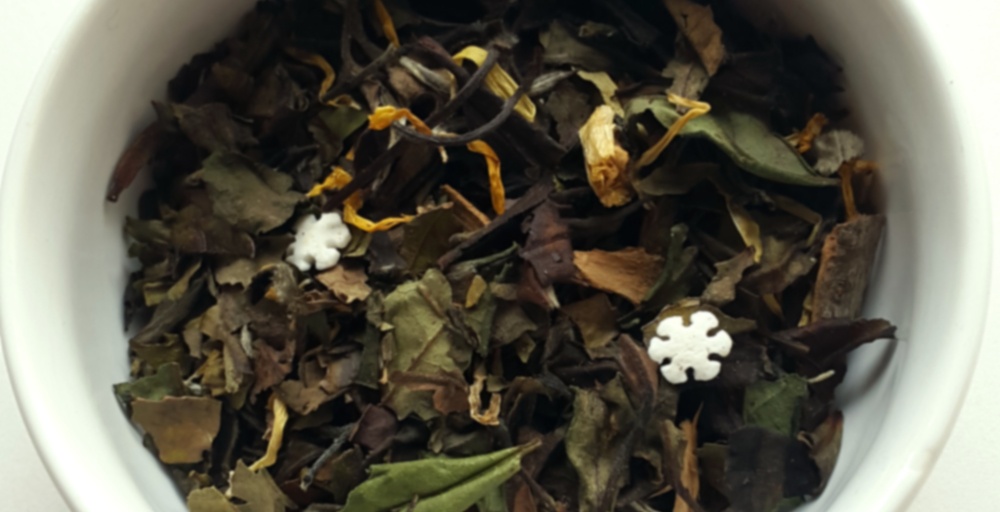 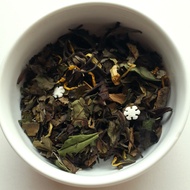 The only thing that could possibly make a winter-y cup of eggnog better is to bake it into a cake. Or a pound cake in this case! White peony tea works as the base for this creamy, cake-y tea accented with a pinch of nutmeg and cinnamon.

I saw this in a friend’s cupboard and asked to swap – glad she had some left! This tea snarls great. I never heard of the jobs if tea it was, so I had to Google it. I didn’t know it was a white tea, so was worried when the color was not that deep. I frothed up some half and half and added a teaspoon of erythritol and made it as a large. I enjoyed it. I’m glad I have more than one cup’s worth! The little snowflake sprinkles were a fun addition.

A beautiful tea! It’s very fluffy with huge leaves and long curls of cinnamon bark. It doesn’t really smell like eggnog or pound cake to me, but it does have a spice note. It tastes of cinnamon and, strangely enough, raisins. I have a hard time finding flavor in white teas but this one does have some flavor compared to others.

The first to be tried from my A Quarter to Tea sample order! :)

Hmm, I do admit to being a bit disappointed. I actually overleafed a bit, and still this is quite light on flavor.

But the flavor that is there is quite good! There’s a lovely creaminess here, and I do taste a hint of eggnoggy nutmeg as well. I can taste the base tea, and it has a smooth oat & hay flavor. There’s perhaps a little hint of amaretto or rum flavor in the background as well?

It’s good, just a bit lighter than I was expecting. But definitely custardy! If it were a bit stronger, it would be completely amazing.

And your slippers are adorable!! :D

Thank you! They are very cozy too, with memory foam inside and rubbery soles.

This year is going by so fast! I ordered this tea sample during their Black Friday sale and it’s already May!

So Apparently I am just terrible at brewing white teas because I can’t seem to get them to my liking most of the time. I think what went wrong with this one was the fact that the tea strainer I’m using is made for another cup but I used it with my preferred mug which is quite tall. So I think the water doesn’t always reach the strainer as much as it should or something…. The age could have also slightly affected it. The only white tea that I haven’t seemed to mess up is AQ2T’s Banana Split one which I loved. Of course I can’t remember what cup I used for it or what strainer though.

I have finally found a tea to rival Butiki’s Creamy Eggnog, and for a while I genuinely believed this day would never come. I should probably also add that I had this one pegged as a green tea initially (at least until I tried it) – probably I was thinking of Butiki’s blend instead. This one is actually a white.

Brewed, it’s super creamy with a delicious custard flavour. It’s not artificial or overpowering, but simply perfect. I get cake flavour mostly toward the end of the sip, but it lingers well into the aftertaste. There’s a hint of nutmeg, but really not very much – given how beautiful this one is, though, I can’t say I mind.

The leaf is also a thing worth looking at, with it’s snowflake sprinkles, yellow marigold petals, pieces of cinnamon stick, and actually green white tea leaves. It’s so rare for flavour and presentation to come together so well, that I think it’s worth noting when it does happen.

I’m seriously impressed with the teas I’ve tried from AQTT. I feel another order coming on, maybe as soon as this weekend…

Delicious…yummy in a cup. A nice balance of flavors. One of the better dessert teas I have tried. It does not have a nutmeg flavor so much as a custardy flavor. I actually made this in my travel press this morning.

This is a winner. I may even love it more than actual eggnog.

For old fans of Butiki’s Creamy Eggnog, this is a more than adequate replacement. The main differences are this has a somewhat floral white tea base instead of a green, and it takes a backseat to the flavouring instead of being particularly noteworthy in it’s own right.

The smooth and creamy eggnog flavour is spot on, with even the odd hint of cake. I just need to remember not to double fist it with On Wisconsin Jade Oolong; that was possibly too much cake this morning (but so good that I secretly regret nothing)!

This tea is good people, Sil. Did you pick up a sample of this in your order?

nopers. it was gone, think it was a limited edition, but between a bunch of us we may have enough someday to get 4oz made.

No, no! There’s more! D: Although it does seem like it should be seasonal tea.. (not complaining).

weird…totally wasn’t there when i looked…i’m losing my mind i guess. I’ll have to add it to the wishlist and check it out next order heh

It definitely feels like there are teas that are missing or have moved from the limited edition section since I ordered on the site so you aren’t the only one :/

Travel mugged tea for today’s drive to the airport to drop off a visiting friend, a drive (and situation) which ended up being quite awful. My car decided to start making some unpleasant noises while on the 401 (major highway). I pulled over to the shoulder, we got out, nothing obvious seemed wrong, but the noises started whenever the car was turned on, and especially since I had the baby with me, I was not comfortable continuing to drive. So we called my husband and CAA… and since I was reluctant to keep the car on, and it was probably the hottest day of the year so far, we got out of the car with the baby in the carseat, and parked ourselves in the ditch. (I’ll note that we were advised to remain in the car, but traffic was crawling and I didn’t feel overly unsafe out there as compared to a sweltering car). Didn’t think of the fact that I wasn’t wearing sunscreen. Over an hour after we pulled over, CAA and my husband arrived about 5 minutes apart, and we swapped cars to continue our way to the airport… but by this time, traffic is massively backed up due to a major accident, rush hour is starting, and her flight leaves in just over an hour (the entire drive is usually under an hour; we left 3 hours prior to her flight leaving). AND, the baby is hot and hungry, but was too hot/distracted to eat when I tried to feed him earlier. AND, I had forgotten that the a/c doesn’t work in my husband’s car. So we start driving, but the traffic just keeps getting worse, the car is just about as hot as the one we just left behind, and the baby starts screaming so I have to pull over at a weigh station to feed him… so we ended up missing her flight, which she then had to rebook for nearly triple what she originally paid. I felt (and still feel) awful about that. And then, I had the joy of driving home in rush hour, still in a car with no a/c, and still with an uncomfortable, screaming baby. And, a blossoming sunburn thanks to standing in a ditch for an hour (the baby is not sunburnt; luckily I had the sense to shield him). So, a pretty awful day (and a pretty crappy end to an otherwise fantastic visit!) Side note: the problem with my car is apparently minor, and it was actually still driveable, but I couldn’t have known that.

tldr; Car troubles + traffic led to my friend missing her flight home, and having to rebook for an obscene price, and I ended up with a wicked sunburn and much sadness/regret.

I have had those days.

Thanks everyone. On the plus side, everyone’s okay, and my sunburn isn’t as bad as I thought (whew), but I was still pretty drained from the stress of it today. I was too pooped to make tea last night, but have made up for it today, for sure.

I get a lot of creamy, custard notes from this (especially as a latte), however I’m not getting nutmeg/eggnog spices. Doesn’t matter, though, because you can’t complain about custard and cream.

This tea is good, but I’m a little puzzled. Cinnamon in eggnog?! Nutmeg is quintessential for eggnog, so the cinnamon is throwing me off. It is however a very creamy smooth tea. It reminds me a little of a butterscotch tea I have had and enjoyed. I’m a little distracted by the aftertaste of green beans and Indian curry that seem to be lingering the more I try to concentrate on the flavors of the tea. Cinnamon fades the further I sip into this cup. Adding sugar didn’t do much for me and I think I added a little too much cream, so now the bottom of my cup is cream with light notes of nog.