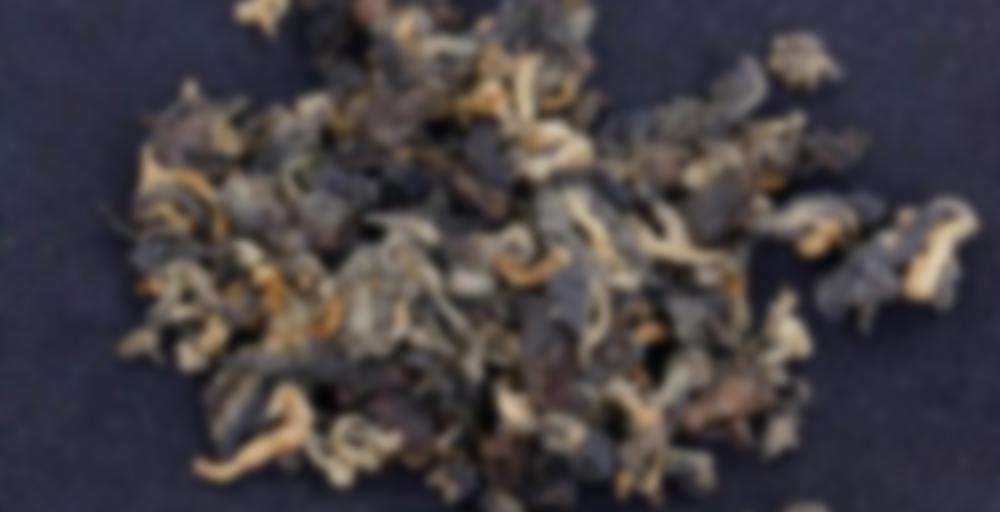 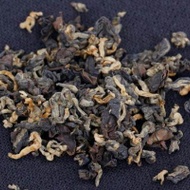 A beautiful tea made in Jingmai. The processing is similar to taiwanese oriental beauty but the leaves are rolled like a bi luo chun. Summer ancient tea garden material was used to make this tea. This is a heavily oxidized Oolong similar to oriental beauty, though the rolling process used is different and turns the tea leaves into little balls, similar to Bi Luo Chun green tea.

This is a very special tea that has a history of its own on Jingmai mountain:

Traditionnally, Pu-erh tea was the main focus on Jingmai mountain, it was a simple tea that didn’t require specific machinery to be made. Then came black tea, which required some degree of expertise and rolling machines. As time goes, the different ways of processing tea spread across the tea mountains. The knowledge from this one comes from the sleeping beauty: Taiwan.

In the 90’s, a group of Taiwanese tea makers opened a tea factory on Jingmai mountain: the 101 tea factory. They would produce Taiwanese style tea and take advantage of the good raw material available on this tea mountain. They employed locals to help them in the factory, business was really good.

But soon, those who worked in the tea factory would leave their job and imitate the processings they had learn to make taiwanese-style tea on their own. This is how this technology spreads in the villages of Jingmai mountain.

Don’t beat around the bush, if there are thorns they will get you regardless how careful or not you are.

This tea is more or less better described as a black tea with honey notes coming through like neighbors talking at 2am and your walls are thin; you know its there and you get about 40% of what’s going on.

I think this is only the 2,3, or 4th batch… and there is much to be worked on as it tries to emulate OB; it’s not actually OB if you know the processing and all, or at least that’s my understanding (which I didn’t even describe, woooho scapegoating with my own knowledgessssssss)

The leaf on this one is preeeetty! Very unique looking and loosely rolled or just giant leaf in the style of rolled oolongs with variegated yellows in there. I got hit by a whole lotta hong must when I opened the bag for a sniff first time, but on my second and third sniffs a distinctly sharp-sweet citrus that is characteristic of jingmai puerh (in my experience, at least) was very evident. Exciting!

Interestingly, the color of the brew on this is much like you would imagine if you took a hong and young puerh and mixed them together—a reddish, neon orange that corresponds to the flavor. The harder this is pushed, the more malt and bitter hong character was evident in the rich red hong soup that results; the shorter and lighter the steeps, the more of the puerh sweetness and flavors came through in the neon orange gold liquor.

Flavorwise, this tastes and smells a lot like how it smells at the very start for the first steep before it really opens up—hong malt with a citrus edge. Second and third steeps continues the hong trend with bitter cocoa and that malty hong-bread flavor traced by sweet and caramel edges. Steep 4 tastes like it is already starting to fade, doesn’t seem like much longevity on this one so I picked up the temp from 197 to 207 at steep 7 and steeped a bit longer, which gets more of a clean sheng taste out, backed by a cleaner malt body with only a trace of red to the soup now. Still not quite a revival of flavor but quite different, however, I ran out of time and stopped it here.

Steeps 2 and 3 were my favorite from this one as I’m a fan of chocolate hongs. This does change quite a bit thought just over the course of this session as I messed with it, and I’d be curious to try this from the start at a higher temp next time or to western this and see how that changes things. Not much energy that I noted, but an interesting experience all the same.

This tea’s a little difficult for me to review – I have very little experience with Oriental Beauty oolongs, which this tea is supposed to be similar to. The dry leaf smells malty with just a hint of raisin to it. After a rinse I smell mostly malt with a bit of cocoa. The leaf looks very interesting – rolled up kind of like a Taiwanese Oolong.

The first steep is mostly some malty sweetness with just a touch of pleasant bitterness. Doesn’t really tell you a whole lot about where the tea is going after, but a pleasant enough cup.

After that, the tea moves into the flavor profile which it has for most of the session, dominated by a sweet milk chocolate note. It’s sweeter than a dark chocolate and there’s really not a lot of bitterness to it. It also has a bit of a milky texture – somewhere between skim and whole milk. I know it’s super pretentious sounding to say that a tea has the texture of 1% milk, but that’s pretty much what I’m saying here. This goes steadily for around six steeps. Other flavors try to poke their heads through at times, but are unable to assert themselves for more than a single steep – some floral or honey notes, just a little bit of dark fruitiness, like raisins or dark grapes. I almost feel like I might be imagining them trying to pick out different flavors.

It finishes off with two or three more steeps that are pretty light and a little bit drying. More malt than chocolate in the sweetness by this point.

I would put this one more in the category of a black tea than an oolong. If it is technically an oolong, it’s oxidized almost to the point of being a black tea anyways. The flavors were pretty enjoyable, but I was underwhelmed by how quickly it vanished from my mouth. With a lot of quality teas, I enjoy how long the flavor lingers – this one is pretty blunt, you taste it while it’s in your mouth, then it’s gone. Might linger a few seconds but that’s it. I don’t know why this is the case – I think it’s decent leaf, but perhaps because it’s a summer harvest? Not sure.

This one was good, and could be nice for fans of chocolatey black teas who want to taste one specifically from Jingmai, but I don’t know that I’d recommend it to somebody wanting something like a typical Oriental Beauty style oolong.

I get the 1% milk thing. It’s something about the oil in some tea. Others call this ‘rounded’ but I really get milk texture. Clear in my brain

My favourite obs have been a bit spicy & honey, not malty, but woody like a 2nd flush Darjeeling can get

Hmm, I should try some more of them. I remember the one I tried having pretty fruity plummy notes to it.

Oh which was that? I’d love to try a plummy one

Mine was from Mountain Tea – where are your favorite(s) from?

Mine was mountain tea as well, the red caddy award winner :) I get honey notes from it

Mine was just the basic one (not the cake one either) – I’ll have to get some others to try. I didn’t love the one I tried. Seemed like an ultra fruity black tea. Generally not a huge fan of black teas.

nor am i, & I find that OB is one I drink less than other teas now (i used to love it so much)