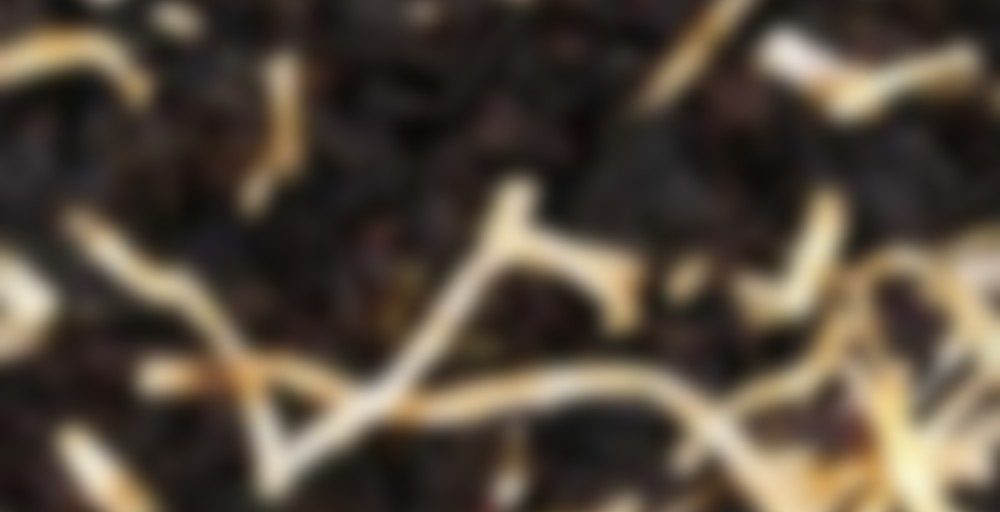 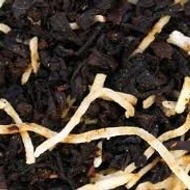 This cup of tea is ripe with the flavour of the islands and is as decadent as banana cream pie! The finest quality black teas create the base for this flavourful cup. Add in coconut flakes, allspice, vanilla and banana and it all comes together for a wonderful taste of the tropics!

The dry leaf smells ridiculously heavenly. Truly like a slice of banana cream pie speckled with coconut on top. There are chunks of vanilla pod and shredded coconut scattered amongst the tea leaves.

This must be a popular tea because I’ve been trying to purchase it since moving here a year ago, and every time I’ve gone, it was completely sold out.

Hot, without any additives, I would say that the banana is the strongest note next to the base. It’s not as flavourful as I had hoped considering how fragrant the dry leaf is.

I tried it with agave and milk, and didn’t care for it. I think the agave didn’t go well with it. Just covered up the subtle flavours even more.

Now, I’m trying it with a dash of half-and-half (I feel so guilty for buying some!) with a bit of honey, and it’s better. I can now taste the coconut and the banana is even stronger, like banana chips. The vanilla is brought out a bit too. I was still hoping for a little more of the coconut and/or vanilla but overall, it’s a pleasant dessert tea.

Would I buy it again? Probably not, but so far, it’s my favourite Murchie’s blend.

It’s so frustrating when the scent is really strong and then in the cup it’s just… flat.

I’ll have to try that one. It sounds really interesting, and I’d be OK with the banana not being too much in my face. :)

If I have any left if/when we ever meet up, I’ll pass some down to you. :)

I agree, not a huge fan of banana but luckily it’s not too strong.

I bought this tea at the Victoria Tea Festival back in February and my friend and I both agreed that it was the best tea there. It was one of the new blends that Murchie’s was sampling and it was the smell that attracted me first – deliciously rich and sweet with hint of the banana and coconut. Of course I figured that, like a lot of flavoured teas, there was no way it would taste as good as it smelled.

Boy was I wrong. This tea tastes exactly like a slice of coconut banana cream pie; it’s almost uncany how well it matches the flavour. There’s nothing the least bit artificial about the flavour and I can clearly taste the real banana, the real coconut and the real vanilla as I sip it. This may very well become my favorite flavoured tea.

Heeheehhee…….I was reading reviews tonight and saw one or two reviews on banana tea, and recently reviews on coconut teas and coconut Oolongs! Not more than 2 hours ago, I was thinking how nice it would be to taste or at least read a review on a tea with banana and coconot! :)) Sounds good too!!

Scott, if you pm me your address I can mail you some. :)

Oh my picked up a small amount of this when I went shopping today.
Smells like coconut banana cream pie.
Made this like a latte with a mix of unsweetened coconut milk and skim milk and sweetened with a bit of agave.
A super nice dessert tea with a hint of banana and coconut.

Murchies is in my ’hood, but their shop is busy, and I thought if I asked for tons of small samples of tea, they would be ( slow ) and aggravated…..so I ordered about 14 small samples of flavoured black tea on- line…..worked ok……still trying them out, but none have jumped out yet as needing to be quickly repurchased……except this one……my favorite murchies tea so far……I went back and purchased a small bag ( 114 grams )…..it really tastes like coconut banana cream pie…..a great desert tea, flavours taste natural…..as an aside, I highly recommend the murchies biscotti…..I thought it would be hard and dry, but it is almost like a shortbread, great quality and very fresh…….they have white chocolate, cranberry…..very nice with tea……

I think I’ve had too much tea lately that I’m having a hard time with some tastes. This smelled really good, but I had a hard time picking out subtle flavours. I did add milk and sugar, so next time maybe I’ll skip the milk.

This is from incendiare from our trip to Murchies a few days ago. She picked up her Butiki order and gave me a sample of this to try.

Thanks VariaTEA for the sample!

This one definitely has a very banana heavy smell with somewhat of a pudding like quality to it; so I guess that comes from the ‘cream’. I cold brewed this one ‘cause that’s just what I do; it definitely was a lot like I expected it to be but did have a few surprises.

The banana was certainly one of the stronger notes, and very candy like. In addition to having somewhat of a pudding like flavour it reminded me quite a bit of those banana marshmallow candies that you can find in convenience stores for five cents. People tend to have polar opinions on those; you either love or hate them. Personally, I can’t get enough. If you put a big bowl of them in front of me I would lose all self control and eat every last one, and probably get really sick as an added bonus.

The coconut is also very strong, though it tastes a touch off. It has an almost oily or greasy buttery flavour to it, which I find is something I’ve come to associate with shredded coconut that’s just starting to turn bad. Despite not totally meshing, it did sort of work with the tea though; that buttery flavour I dislike tied in a bit with the banana marshmallow vibe to create something that kind felt a little more confectionery instead causing me to feel wary.

I didn’t like the black base a whole lot either; I felt like it was noticeably a lower quality base with a lot of flavourings intended to cover that up – some I kind of observed with another flavoured black from this company, though it wasn’t as noticeable with that blend. And, something about the use of it here reminded me a little bit of ash. Only very lightly; but that’s still not a flavour you necessarily want to be experiencing with a “Banana Cream” tea.

But I’m honestly probably making this out to seem a lot worse than it was in reality. The truth is I drank the entire 25 oz. cold brew with very little complaint or criticism until after finishing it and it wasn’t all that difficult to just tune into the fun, sweet banana notes. Overall, this probably balances out to be a relatively average tea. Wouldn’t necessarily recommend or serve it, but it’s not like I’d deliberately avoid it either.

My old roommate went to Vancouver to visit our mutual friend over the holiday season and returned with a few teas for me. This is one of the ones she picked up and tonight I used it for my daily eggnog latte and it was great! It tasted like a slice of coconut cream pie with fresh sliced banana on top. Yum!

This is truly a flavored tea that tastes as good as it smells. When I first opened the bag after purchasing it a couple weeks ago in Vancouver, I was greeted by a strong (but pleasant) banana scent, a medium scent of creamy coconut, and a pinch of spice (Allspice, I think). Brewed, the tea has a lovely blend of creamy coconut and banana. I find I like it sweetened mildly. It’s also good with a hint of cream. It would probably also be really nice accompanied with a little touch of black rum! This is a keeper from Murchie’s.