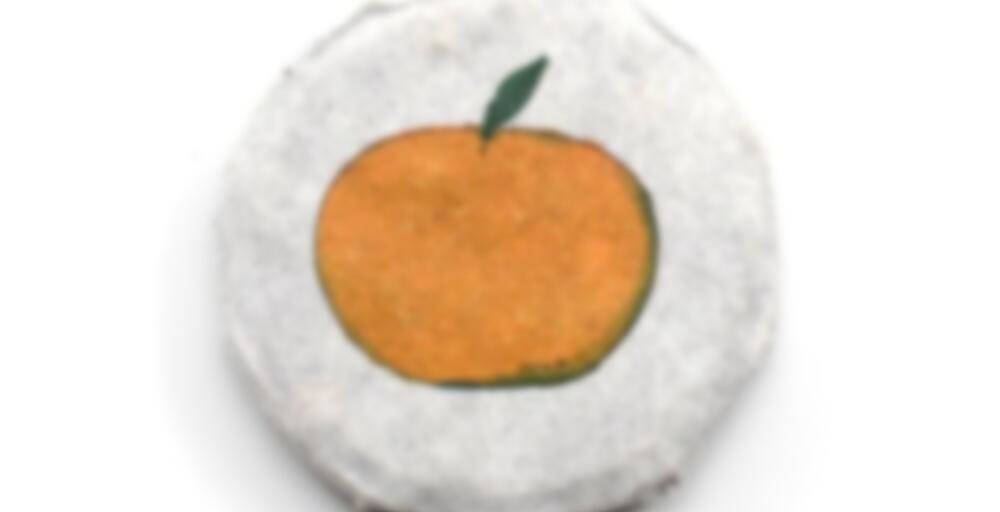 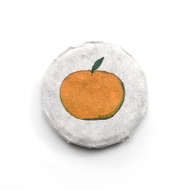 Little O was pressed in 2017.
This blend of ripe Puer was pressed with aged orange peels, also called chenpi from Xinhui, in Guangdong province. The orange peels add an entrancing fragrance to the tea and will age with the tea. When steeping, the tea opens first with a smooth soup texture, with the orange peels contributing during mid to late steeps. The dynamic between the tea and the chenpi is engaging and soothing. An excellent drink for cold weather.
Each cake is 8 grams. The blend contains both ripe Puer tea and aged chenpi.

It’s colder today than it has been recently, so I pulled out a pu’erh coin to try instead of making up an iced tea. I’ve been curious about this one for a while, so it seemed like the ideal opportunity. I haven’t tried a lot of chenpi; maybe only one or two at most prior to this one. Orange is a flavour that works really well with pu’erh in my book, though. I’m brewing this one western-style in my infuser, and I’ll probably stick with it most of the day.

Initially, it’s simply classic pu’erh; damp earth and wet wood. It’s so smooth, though, with the kind of texture that coats your mouth and really lingers – in the best possible way. There are some pithy orange notes from the third steep onwards, starting off fairly mild and building in intensity with successive steeps. It’s very much an orange rind kind of flavour, particularly to begin with, rather than softer, jucier orange flesh. It’s perhaps a little waxy-tasting at times, but I’ve no real complaints.

There isn’t too much variation with this one; it’s a solid performer through many, many steeps. I got tired of it before it got tired! I have another of these in my cupboard, but I’d not hesitate to purchase more in the future – maybe even a cake. Having said that, I rather like the coins for convenience, and they’d be great to travel with. Whatever works, I guess!

Fun for dessert. Orange comes thru increasingly at the end. Overall, wish it had a more balanced taste but I enjoyed it. Fun to have around. Would be great for winter.

94
Recommended
TheOolongDrunk
88 tasting notes
Little O first started out very earthy in taste. However, the longer Little O steeped for, the more it tasted like sweet orange peel. In fact, by the last infusion, the taste of orange peel was still going strong even though the tea leaves we’re spent. I reallty like this little coin because its convenient, and easy to drink. Even if oversteeped, this tea still turned out delicious.

You can read the full review here!

So, I own a cake of Big O – but in an order other than the one where I bought that cake I did end up getting a Little O coin as well. I was just gonna log this one under the Steepster entry for Big O, but I guess it has its own entry so might as well pop it on this one?

Normally I’d use a coin of this size for a Gong Fu session but since I know I have a lot of this one in cake format to drink I ended up just breaking the coin in half and using it for two different Western style mugs of tea while I read a new comic book with some music going in the background. It was very relaxing, and a good atmosphere!

Flavour wise, I don’t think this is any different from Big O – and I mean, rightfully so since it’s the exact same tea just compressed into different sized cakes/coins. Why would it taste any different!? That would be illogical. It’s smooth and full bodied though, with a really nice, natural orange flesh/pulp kind of taste in the body of the sip surrounded by this sort of wet/damp earth and wood taste from the shou. Really, really thick liquor that coats the whole mouth, and a lingering finish that is warm and inviting and made me eager for the next sip. Or slurp, as was often the case. It was good reading tea, very calm and soothing! I have no need for the coins since I’ve got a cake of Big O for me to drink; but if I hadn’t caked it already this would definitely be an affordable approach to the tea with the convenience of not needing to break the cake up at all.

I think my cake needs a bit of time to rest/air out – but these coins seem ready to drink for me to me so if you like chenpi then I totally recommend giving these a go!