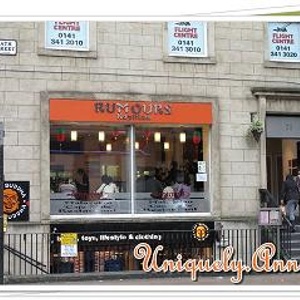 Okie. First thing you have to know about me is that I am a bubble tea fiend.
Was for years in SoCal, then relocated to the UK, and was left stranded. I even cook my own tapioca and make boba at home (yea, its that sad). 5 yrs of bubble tea fasting, living on Taro pearl milk from the Chinese Grocery and then….

Rumours appears on the scene. The taro boba rocks but there is a range of flavors if you aren’t into purple yams. The food is great as well. I admit I am all about the pho style soups, and the pickled mustard green ones are delicious. My partner leans more to the side of meaty dishes and has been very positive on the yum-factor of the ones he’s tried.

But the point of mentioning is the tea! Boba in Glasgow (and there are others which I will make a point to list for other boba-deficient folks). Murphy’s law though that it arrives as my degree wrapped up and I have had to move South. Bummer for me, but there is boba for you. :)

. Boba @ the Savoy Centre
no ratings yet
0 ratings