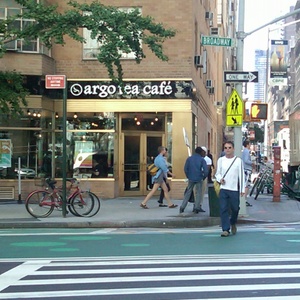 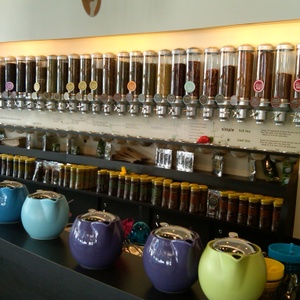 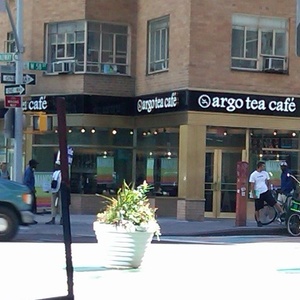 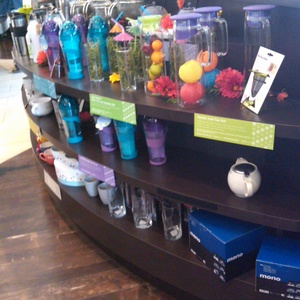 It’s great to have this place in midtown, but I wish it felt more homey, and less corporate. There is a ‘self serve’ area where you can create your own bags of bulk tea to take home. The staff will also brew these teas by the cup. The signs indicate the prices, and how long the tea needs to steep. I like that you could see each type of tea available, and smell them as well. But a pet peeve of mine is when a shop stores their tea in glass or other translucent containers. The light and heat from the sun couldruin the taste of the tea much quicker than if it was stored in an opaque container. I assume that the tea in these vessels has a high turnover rate, so it probably isn’t much of an issue here. It’s also a good way to showcase the tea.

I tried a cup of Nilgiri Black tea. I’ve never had this Indian black tea before. My tea order was up rather quickly- it didn’t feel like the 4-5 minute steep time that was suggested. There was nothing about the tea or the aroma that jumped out at me. But it was very smooth, just not very flavorful. But I guess that is typical of a generic black tea, especially at a low price point. It would probably work well as a base for the many flavored tea drinks that they have on the menu.

The one irritating thing about argo is that there is a huge sign outside the door that says ‘coffee so good, our tea is jealous’. argh! come on, you are a tea place, give respect to your teas and leave the coffee to the starbucks down the street.

On my day of wandering around NYC I went to Argo Tea after my Starbucks breakfast.

I found it just fine, again a surprise due to my poor navigation skills.

The store was not busy, and it was right before lunch (10 am) so I was surprised, as it was a nice location. There were plenty of benches and tables, and two free hours of wifi with a purchase. There were a few other people sitting and sipping tea while surfing the Internet.

There was an island full of tea making merchandise (cups, tea kettles), and a wall of interesting bulk candy type tea dispensers, below them were some pre-packaged teas.

The staff was pleasant and amazingly helpful; they wanted to know if I wanted any help choosing a tea, and what other teas I liked.

I ordered the Carolina honey iced tea. It came out quickly and with a smile.

The tea was a dark yellow-brown color. It visually reminded me of a light wheat beer.

The taste was a mixture of mead and hefeweizen. I almost wanted to ask if it was alcoholic. There was a citrus flavor, perhaps a lemon-orange?

The after taste was an astringent honey.

I did spot in the impulse rack vogues chocolates. There was no bacon vogues though :( I purchased both a chai and ginger green chocolate bar to have as a snack later. If I were not heading to Alice’s for lunch I would have picked up one of their small snacks to gnosh on. Apparently these chocolates were made specifically for Argo teas. The green ginger one was a little spicy and odd, It wasn’t bad but I wouldn’t get it again. The chai one was delicious. There were two other flavors I believe available.

The total bill was around 10$