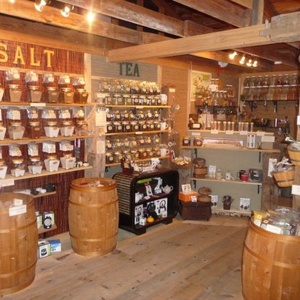 It should be noted that this review is for the St. Armand’s Circle location (Sarasota), but I couldn’t find it in the places listing.

I had a Groupon for this place for when I was on vacation and planned on using it for tea, but knew that I could also use it on the spices, sugars, etc. My Groupon was for $15, everything (spices, tea, sugars) were priced at 4.89….ok… I realize that Groupon is often a raw deal for businesses since they get so little for each one and Groupon takes so much, but don’t force me to spend more than I want to just to help your profit margins. If it’s not a good deal for you, don’t do it. You also couldn’t use the Groupon on accessories so I had to pay for my travel steeper out of pocket (which is fine, just worth noting)

Anyway, that aside, I was rather disappointed in their selection of teas. For a place that calls itself the Spice and Tea Exchange, you’d think they’d have more tea, but the majority of the shop is filled with spices. The tea is relegated to a small corner in the back where it takes up three shelves. There were probably about 15-20 varieties of tea, which may seem like a lot, but if you prefer one type over another, it really only gave you a few options. I ended up getting two of one kind just to meet the Groupon minimum.

Everything is sold in 1 oz bags for $4.89 and it should be noted that the tea is sold in clear plastic bags (offering no protection from light) and the smell from my coconut oolong bags was so strong it made me think the coconut perfume in my TSA approved toiletry bag had spilled even though it was kept in a completely seperate pocket of my suitcase. I would like to see a litte more care taken in the packaging of the tea, and would have loved the ability to buy in larger quantities, even better with a slight price break.

Worth a stop (coconut oolong and nutty dessert tea FTW) if you’re in the area.

. Sweet Sage
no ratings yet
0 ratings

. A Corner of England Tea Room
no ratings yet
0 ratings

. The Don CeSar Beach Resort and Spa
no ratings yet
0 ratings