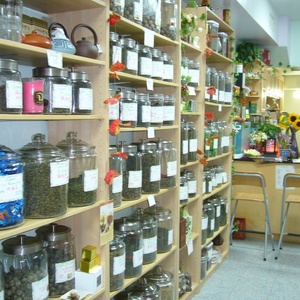 This is a great spot to buy tea if you are in the area or if you need a reason to come to Chinatown. She has very reasonable prices for the quality of tea she offers. I go back often for the ‘tong tian’ dancong. It is fantastic!

I like this place best due to the organic teas offered……..probably the best I have seen in my days.

It’s relatively difficult to find organic tea coming out of China for a number of reasons. Many tea afficionados are aware that products labeled “organic” aren’t necessarily organically grown. An example would be the cotton farming industry that plays around with the terms “certified organic cotton” and “organic certified cotton,” only one of which is grown organically. It helps a great deal to have someone purchase directly from China who quality checks her sources as she says she does. One must remain ever-vigilant that she, like so many others, may fall prey to high rent and not enough customers, and just sell her conventional products as organic. I have no evidence to believe she would do this, nor would I like to ever think she would. She is a very kind and helpful woman who seems to know and love what she does. So far, from the two or three times I’ve purchased from her, I’ve gotten some nice teas. The only downside is some of the teas are a little stale, as I think turnover isn’t very high. That being said, she isn’t a Teavana in a megamall turning tea over like bread in a bakery, and thus she deserves my continued loyalty.

It’s my favorite tea shop in the city.

The selection is great and Lorna, the owner knows her stuff. She made a special blend of tea for my daughter, which years later is still her favorite tea of all time. It’s called “Stacy’s Blend”.
It’s a combination of organic black tea, rooibos, green mate, toasted almonds and cacao nibs.
Go in and try some “Stacy’s Blend”……I’m sure you’ll love it!

Sun is wonderfully knowledgeable and patient—she’s a treasure.

If you’re a Pu-Erh fan, you’re in luck. She not only sells cakes—both full size and mini—but has a few of the aged (shou) cakes broken into chunks (approximately 2-3 oz each) for purchase, making it easy to try new things.

The organic Lapsang Suochong is excellent. The blended Pu’er is very good for the price. Many other to choose from.