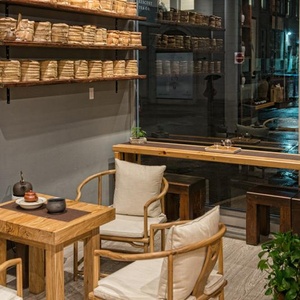 Van Cha in Vancouver, BC
5/5
Edit
AJ rated this place
5/5
and said Edit

The first time I visited the door was locked; but I made my way over there again today after visiting Cha Le.

It was busy. Like SUPER busy. There was no seating, but everyone was incredibly gracious, and a spot opened up after a wait. I was a little intimidated on what to get, since their specialty is definitely puer and it’s still not something I feel very confident about. I went for their amber oolong, which was a medium roast of some sort, and enjoyed it. First steep was all roast, but pleasant; second steep opened up into something nutty and it got more floral with subsequent steeps, with a bit of almond.

It ended up dying down after about an hour, and I got to chat with people there; I shared a sheng with a couple that came in, and I wish I’d asked which one it was exactly, because it was very nice. Started out very strong, but mellowed into a pleasant, woodsy, slightly drying tea; someone said ‘citrusy’ but I’m not sure I quite got that. I’d say almost pine or cedar-like.

The shop itself is tiny, which made it really crowded when it got busy; but it’s very welcoming, and it smelt like they had sandalwood incense going when I first came in (I’m a sucker for sandalwood). It’s definitely a sit-down time of place, although they offer tea to go (I thought of getting that, because it was so crowded, but was offered a seat and ended up getting a session instead).

I ended up staying long after my tea stopped producing flavour.

. Murchie's Tea and Coffee - West Hastings
no ratings yet
0 ratings