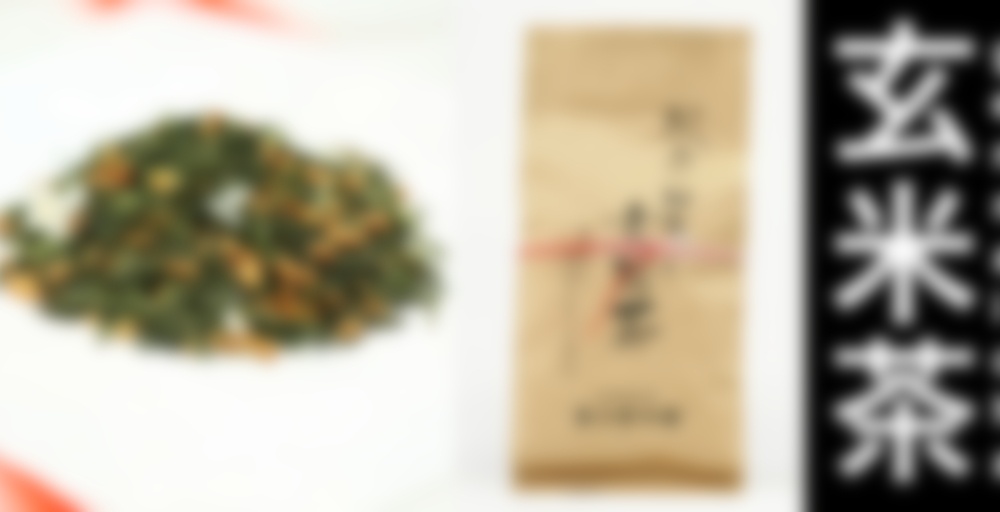 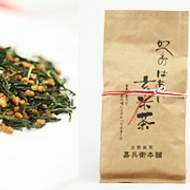 It is made from bancha tea and popped, roasted rice.
Genmaicha is soothing and mellow; the popped rice adds a wonderful balance of roasty aroma to the refreshing green tea.

The tea leaf has been tasted and rated as “Sencha” (High grade green tea). “KAHEI” brown rice tea has the scent of roasted brown rice and a mild fresh taste. It is a blend of four tenths brown rice and 6 tenths green tea. The care and dedication placed into this tea prevents it from being mass produced.
With every bag of tea we roast the brown rice at the last minute before mixing and packing the tea so that you get the very best aroma and flavor.

KAHEI” brown rice tea is the tea leaf we use for our tea. “KAHEI” is grown on 2 hectares of tea plantation soil; surrounded by the nature of Yoshino in Nara prefecture. Though Yoshino is not a famous brand like Shizuoka, Uji, or Yatsume the tea is still very delicious.
“KAHEI” tea, based in Yoshino, Nara, is located 220 meters above sea level in a mountainous region of Japan.

This environment is perfect for growing tea; allowing the tea to grow quickly. The tea is picked and made by hand; this tradition of tea making has been passed down for generations, since the Tempo era in 1154. The villagers of Yoshino use the tea to maintain their health.

Delicious afternoon tea. Nutty and comfy! I love the large bits of dried brown rice (almost like rice crispies) and popped popcorn. The leaves are needle-like and dark green and thin. Very good tea indeed. I received this from Shinobicha. Thank you! I really enjoy a good genmaicha. I always think of the genmaicha I drink when going to my favorite Japanese restaurant.

This tea is not overly ricey (is that a word??). The sweetness of the bancha comes through as such a delicious aftertaste; it makes me want to compare this bancha to others and see if it really is a superior one (it tastes like it at least!).

I tried an experiment in the last week – I took about 2 TBS of this an put it in a dry pot, and roasted it over medium high heat for about 3 minutes. I did it a little too long, as some of it burned (it is such a difficult balance, because it goes from green to roasted to burnt VERY fast). It wasn’t too bad, though not as good as other houjichas I’ve bought.

I’d like to try it again but take it off the fire sooner. Freshly made houjicha (or in this case houji-genmaicha) sounds like it would be amazing.

Yes ricey is a word. Your only other options would be riceish and riceeque and they sound dumb lol.

I read about this tea on someone’s tea blog. It’s a mild genmaicha, which is very nice for a change. Smooth and terribly delicious iced. It has a nice sweetness to it, light though. It is good for 2 rebrews. I would consider buying this again. Thank you Shinobicha for letting me try this!

1TTEN sent me this tea and a tea set for free after I answered a questionnaire, so I may be a little biased toward it. I decided to use the new pot and the directions included with the tea. I put three heaping tablespoons of tea into the pot, poured boiling water over it, let it steep for 30 seconds, and poured a serving into one of the new tea cups. I poured the rest into an insulated travel mug. I didn’t add any sweetener. The color of the tea was a bit more green than yellow, compared to the genmaicha I’ve had in the past. The roasted rice flavor wasn’t as strong in the first cup as what I’ve had before, either. Mild to medium, I suppose. It had a nice vegetal aftertaste. I thought it was very good. The rest of the first pot sort of got cooked in the travel mug, so it was more yellow, had a stronger rice taste, and didn’t seem to have that vegetal aftertaste anymore, but it was still good. I think I oversteeped the second pot. 1TTEN’s website says that the second pot doesn’t need to be steeped, but I forgot that and instead steeped it for a minute. It turned out similar to the tea I had left in the travel mug, but a bit milder. It was still pretty good. I’ll have to experiment with steeping it in the easy gaiwan and the finum infuser, since I don’t often drink two pots of tea by myself. Based on these two pots, I think I might buy more of this tea when the package runs out. If I can get it to taste like the first cup again, I will definitely buy more. Of course, the only genmaicha I’ve had before is Upton Tea’s Gen-Mai Cha Kamakura and some that I bought at Hyundai Oriental Grocery & Gift and finished a few years ago, so I wouldn’t say I’m very familiar with genmaicha in general.

You won it too? Wow…I wonder if everyone who entered won…