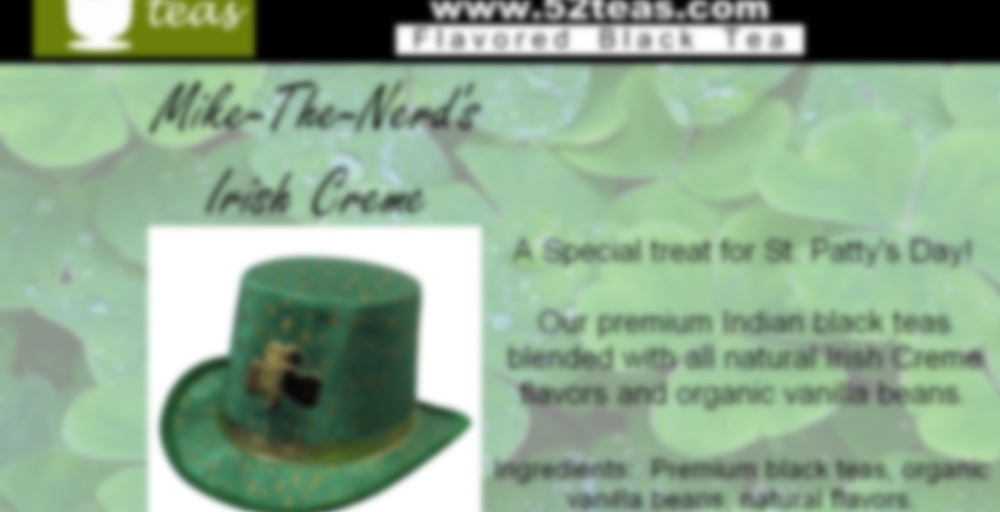 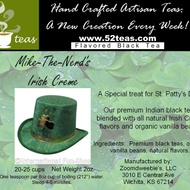 Mike-the-Nerd is a longtime friend of my Mom’s. When she met him, I think she knew 3 or 4 Mikes and so they all got addendums to their names. There was Mike-the-Nerd, Mike-the-Gay, and a couple of others that I forget.

Anyway, Mike-the-Nerd came to visit us last month for our big Groundhog’s Day Party and he suggested we should create an Irish Creme tea. I thought it would be cool to create it for the week of St. Patty’s Day, so here it is!

Need to finish the packet of this before it loses its Irish fling, and as it’s a little long in the tooth, need to step up the steep time and amount o’wee leafies. As it is, the creme gets you before the mint.

But today I would gladly imbibe generic-grade grocery store fannings as long as I can do as I just did…rocking slowly outdoors in my patio glider (first time in too many months!) watching the daffodils grow.

Bumping up for AWESOMENESS!!! I just made a pot of this and it turned out so well. Rich and creamy with that Irish Cream flavor I enjoy so well. I did try it with almond milk and I have to say it wasn’t bad but straight up is really the way to go. This is quickly becoming one of my favorites.

Did this have the actual taste of the alcohol to it as well vs just an Irish Cream flavored creamer? I had a latte using rum syrup once that nailed the alcoholic taste, not just a “rum extract” kinda thing. It was the only time I’ve experienced that.

No, no alcohol flavor at all. It is sort of like the coffee creamer but much better and not at all artificial tasting. Just umm..ummm good!

Darn, it’s that “bite” I was hoping for to distinguish it from other similar teas.

Thank you to Rachel for sending me some of this to try! I didn’t order it when it was introduced – I don’t know why! And now that I’m tasting it, I really wish I had!

This is fantastic! Smooth and creamy. I am contemplating adding a splash of cream to it to enhance the creaminess, but, since I’m about to write a review of this for the Tea Review Blog, I wanted to first experience it without the cream… and it is really good like this. Delicious!!!

And if you want to propel this from awesome to SUPER-awesome, just add a few drops of the Breve Cream Dark Chocolate Creamer. OMG. Amazing.

Just a few drops (shocked face) LOL. Glad you like the creamer. The seasonal Mint Chocolate Truffle is also VERY chocolaty as well as very minty.

With a little milk and sugar , this is a nice creamy treat. Yum-

Another long ago 52teas purchase that was never opened. I’m breaking this one out in anticipation of St. Patrick’s Day. I’m only just the tiniest bit Irish, but hey it’s an excuse. I can see the St. Patrick’s Day menu now. This, Irish Breakfast, some green tea later in the day. Maybe some corned beefy lapsang, or something with a potato note. Who knows what else I might have in my stash that’s appropriate. Heh.

The packet has a creamy vanilla fragrance with a darker undertone, and this also comes through in the aroma of the steeped tea. It has a reddish-maple colored liquor.

There’s something dark-ish about the cream flavor in the tea that’s almost got a chocolate tone to it. Not so much a whisky flavor, but I “get it.” It’s a nice approximation of an Irish Cream like Bailey’s in tea form. The BF said he “got it” right away, too.

It gets high marks for flavor replication and pretty high marks so far for drinking pleasure. I don’t think I’ll have a “food tea” problem with this, but the flavor is a bit heavier than some of the other 52teas blacks I’ve had recently so it may not be something I can drink easily every day. We’ll see.

This is a flavour I approve of in just about every form they can put the flavour into. Heck, one of my favourite cocktails (yes it’s a cocktail) is Baileys and milk.

(I wanted to order it at a bar in LA, and my date was like “are you seriously going to make me order this?” and then apparently the bar had no milk, which is super weird, and I think they thought I was creepy. I settled on an amaretto sour. It was $14 and it was fine, I guess.)

I feel like I need to investigate this, though, because dude. Good flavour is good.

Baileys on the rocks is better…

This sounds far more appealing than the creme brûlée flavours I’ve seen around!

“beefy lapsang”…haha! i’ve got you covered on the potato note- just look for Echinacea Plus by Traditional Medicinals & you’ll get raw potato (with the skin still on) dunked in water prior to boiling. soon after, it is followed by mint <—— green!

I just checked and it’s out of stock, but I bet if enough people clicked on “please reblend” they’d do it for St. Paddy’s day!