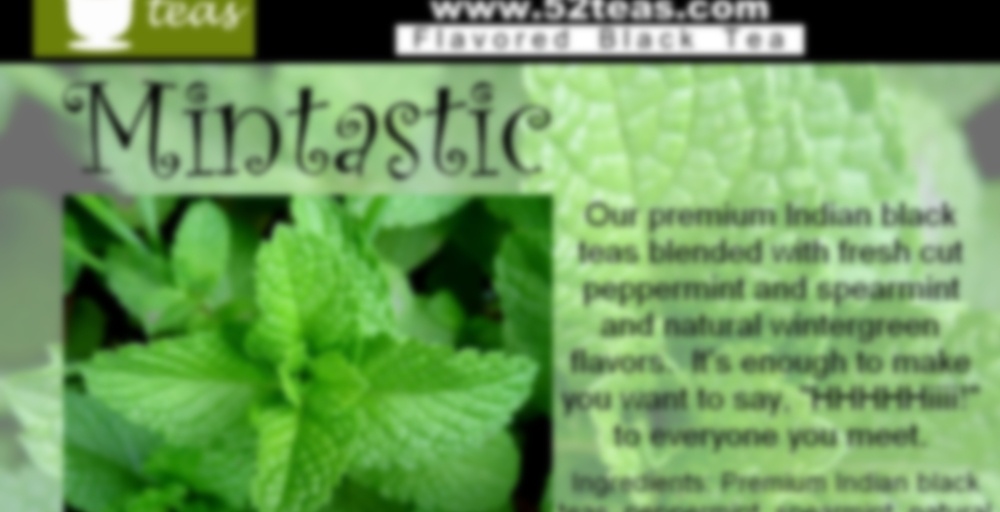 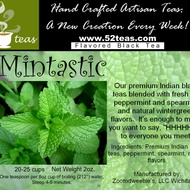 Here’s a blend of our premium Indian black teas with fresh cut peppermint and spearmint and natural wintergreen, spearmint and peppermint flavors. It’s so minty, it will make you want to walk around saying, “HHHHHHhhhhhhhhiiii!” to everyone you meet.

SIPDOWN and Backlog on this one! We got hit MAJOR with a storm and this was one of the ones I drank a few cups-worth of last night!

Be warm and safe!

hope the storm blew over. We got snow last night so i’m a happy happy girl!

Very minty! Probably the most minty tea that wasn’t an herbal tea.

I think what I like best about this blend is the wintergreen. I mean, I’ve had blends with spearmint and peppermint, but not so many with wintergreen. The wintergreen gives it that crisp scent and flavor that reminds me of Beechnut Wintergreen gum (something that is very difficult to find these days).

Delicious. I like this much better than I thought I would, and I knew I’d like it!

Wintergreen rocks. Ever tried the Wintermint blend from Stash?

I was debating on ordering this one or the Shamrock tea from 52Teas, ordered the Shamrock… I will have to try this one with the next order.

I’d love to try this someday!~

I received my Mintastic today and decided it was just the thing. Dry, it smells lovely with spearmint perhaps winning the mighty contention between minty compadres for the “lead” aroma.

Once brewed, the odor is of a toothpaste/mouthwash mix. Pepsodent with a touch of Listerine? Ipana with Lavoris possibly, although I know that’s a little bit Ike and Mamie. Crest with extra whitener? I was a bit perplexed at first, but gamely sat down to drink my tea, knowing that I’d end up with minty fresh breath at the very least.

On taste, however, any serious intimations of toothpaste or mouthwash or anything medicinal, disappear. The trio of spearmint, peppermint, and wintergreen dance a lively gavotte in my mouth. No, it’s more like a Morris dance, where they take turns leading. No, it’s more like an English country dance, which Henry Tilney tells us is an “emblem of marriage”. The three distinct tastes remain distinct, and yet know when to blend and when to dip and when to “do si dos”. In sooth and in truth, it’s a delightful marriage of mints.

I can certainly see this as making a great iced tea too. Totally refreshing!
I have been consistently pleased with 52teas and consider their quality and their level of invention one of the best deals in the tea-buying world.

SECOND TASTE:
I like this as much if not more than I liked it yesterday. I used a smidgen less tea and this time I added a very small brown sugar crystal or two and a quick dash of milk. Although toothpaste overtones remain to the aroma, it’s a satisfyingly minty blend and it tolerates the milk very well.

I haven’t thought of Ipana in a long, long time. Brusha brusha brusha.

sounds like a great summer tea! I’ll have to try this one

I wasn’t that excited when I saw last week’s tea of the week, but, after reading this review, I’m rethinking it… maybe I will have to order it. There is one or two others that I want to try of theirs, but have been waiting to see what this week’s offering will be.

Well this is ALL wintergreen this time around! The black tea is hiding under the bold mint flavours, but somehow it all works out. I do get a toothpaste/mouthwash association, but surprisingly it isn’t bothering me. If anything, the dry aroma is my least favouite part of this tea but somehow the bold wintergreen tastes “just right” in conjunction with the other mints and the tea. Not my favourite, but nice to have in the arsenal for days when you get sent to switchboard and have headaches from needing new glasses.

Whoops. I really didn’t realize it until I added this tea to Steepster that one of our competitors has a tea blend by the same name. I guess great minds think alike. Anyway, it was a little late to change it now, but it’s a different sort of tea anyway.

Maybe a double t? Seeing it as Minttastic or Mint-tastic would prevent me from pronouncing it Mintasstic… that’s just icky…

Alright, here is the fix. Mintttttttttttastic. Don’t let me down.

I was a bit nervous about this tea. I usually have to be in the mood for mint, and I wasn’t sure that today was the day. Steeping this tea smells exactly like the Moroccan Mint that I have which I do like, but that is a green tea base…and this is a black tea. I’m a little worried about the black tea/minty combo. Thankfully, I was worrying for nothing. The tea is light and minty with the black tea base dominating. Overall it tastes like a great black tea with a minty finish. I like this a lot more than I expected. Thanks Doulton!

I enjoyed starting my day with this tea. The tea is light and minty with the black tea base dominating. Overall it tastes like a great black tea with a minty finish.