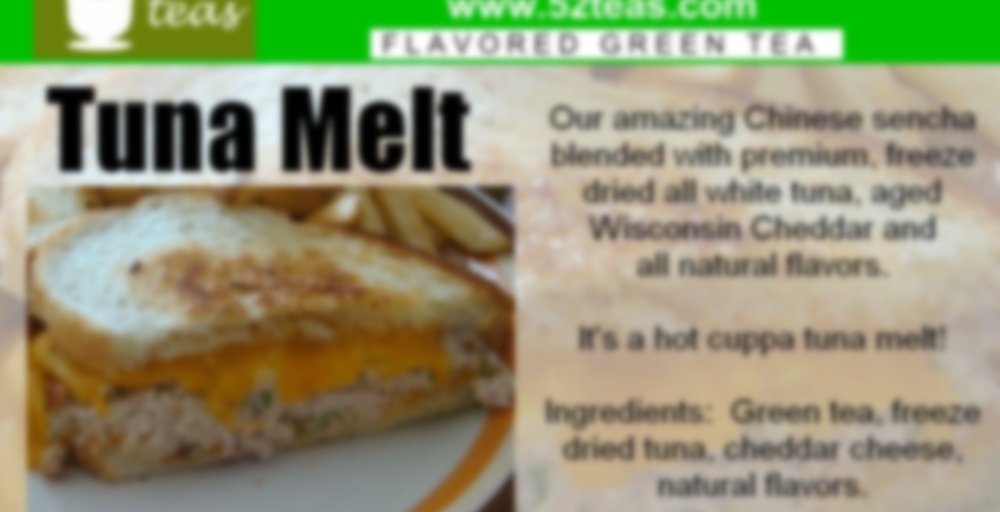 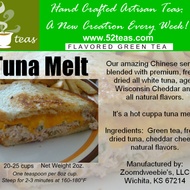 We combined our buttery sweet Chinese sencha with real freeze dried all white tuna, aged Wisconsin cheddar and all natural flavorings. It may sound strange, but this is a savory treat we think you are really going to love. Be sure to get yours now before we sell out of this very limited edition blend!

When Frank sent out an email announcing a new blend this morning I was shocked. Tuna Melt? I mean come on. I like Tuna Melt paninis, but Tuna Melt tea? And it’s not even black tea. It’s green! What was Frank thinking? Clearly, he wasn’t. American cheese, buttery, greasy fries and tea. Somehow that combination doesn’t strike me as being particularly good, in terms of taste and for your health.

I pulled out my trusty cellphone that’s been dropped quite a number of times (poor thing) and speed dialed to 52teas. Frank picked up, but only after what must have been the hundredth ring. He was probably getting overwhelmed from the Strawberry Matcha orders a few days back or was it numerous phone calls asking him about this crazy blend of his… tuna melt. I still don’t know what Frank was thinking. I told him, I though he was crazy. He told me it was amazing and I should try it. He was like, you know what? I’ll even send you a pouch for free, rush delivery, free of charge, cause your my number one favorite customer. Wait, or was it Chelsea that said that? Ahhh, I forget, I’m getting old. Must be all that ginko tea I’ve been drinking. Was it ginko? Darn it, I forgot what I was talking about.

Oh yes, back to topic. Tuna melt! Argh, the idea still disgusts me. So yeah, an hour later the guy in the brown suit arrived with a brown package. I signed for it and unwrapped the package, sorta. Well, you see. I think the UPS guy got a bit hungry, the package was already torn open. At least he saved me half of the contents. I got out my Sorapot for this special occasion and patiently waited for my Zojirushi to drop to 175F. Pondering why this is a green tea base. Ring ding, plays a melody. Whatever, I meant to say the zojirushi made some noise and the water was finally ready. Wohooo, three minute infusion and I was ready to dive in!

Woah. Takes another sip. Woahhh. No seriously… WOAHHH. I thought Orange Ginger was good…. but this? You’ve out done yourself Frank. What does it taste like? Well, if you think of your favorite tea, for some people that might be matcha, for others it may be Japanese greens or pu-erhs. Whatever it is, close your eyes and just imagine it, imagine drinking it and sharing a cup with your favorite person, OR hording the cup. I mean if it’s your favorite tea you’d probably want to drink it all for yourself. Okay, now imagine all that plus your happiness moments in life. Yeah, it’s that good.

Yeah, that’s actually all a pile of BS. It tastes like nothing at all. It’s like drinking air or waking up from a bad dream. Darn you Frank!!! You would have totally gotten me if you had created a Peach Matcha blend. At least I didn’t get rick rolled ;)

This note is dedicated to Frank for making great, interesting, (insert adjective here) tea all year around. Sure there are some hits and misses, but in the end it’s the good ones that matter.

And our fellow Steepsterite member, Cofftea. Cheer up, it’s April Fools. Sure these jokes can definitely be annoying at times, but hey, we’re all adults and we only get to be pranksters children once again every year. If it can brighten up someone’s day, why not. Let em have their fun and games.

Your review is wonderfully evocative and beautifully written.

I bet Frank is secretly making this tea and it’ll really be a blend next week and we’re all going to be like, Frank, April’s Fool was last week and no one’s going to purchase the Tuna Melt. Wow, talk about run on sentences. I went to the park and I bought an ice cream and it dropped on the floor and I cried and I really didn’t do anything of this, but I just enjoy using the word and and that’s it.

I love it! Amen to your tiny print.

Thanks all. Tuna melt is most popular tea! Success!

Amen to your fine print section- I ‘liked’ it for that reason and because the joke make me happy on april fools, which it apparently didn’t do for some people. Cheers!

Guys I know I recently decided not to rate my own teas, but I am going to make this one exception for this truly amazing blend. Everybody keeps telling me how weird or gross it sounds, but this is truly an amazing blend. Worthy of a 100 rating from me and everyone else!

Ok seriously. This got old hours ago. After today it’s just deception (not that it wasn’t today), because I doubt people will check the forum to make sure this is legit. It is not an amazing blend, because it doesn’t exist. It probably would since pu erh already is defined as “fishy” to some people, but currently is not. If you’re gonna rate your own teas, at least rate one that actually exists.

I personally think it’s even better with a little mayonnaise.

Since I like onions with my tuna, I think I will infuse mine with a little chopped onion and see how that turns out. Maybe add a squirt of mustard… although the mad hatter might not approve.

Chunk light or albacore? Water packed or oil packed? Cheddar or provolone? As my 6 year old would say: “made you look”!

Maybe a little chopped celery would lend a slight vegetal taste too. And some lemon, because it goes with fish and tea, giving it a zesty zing!

52teas, this post + responses just proves you are the greatest.

Roflmao, I’m so sad that I just now joined Steepster and missed out on this whole event!

I second Shanti. Where was I a year ago, dangit. Re-blend, pretty please?

Ashley, there was no first blend. That’s the entire point.

Words cannot describe the amazing taste of this tea. The sweet taste of premium Tuna and aged Cheddar is a perfect match for this Green. I drank this tea while eating a Tuna Melt Sandwich and had a hard time telling which was which. Masterful blend. Hats off!

wow, i was waiting to see when you might rate a tea 100. Did you get another sample package?