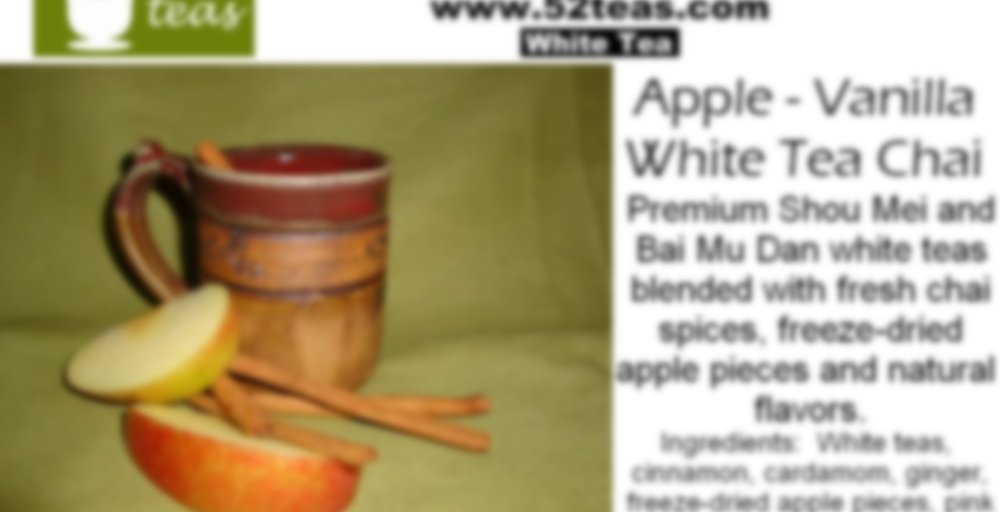 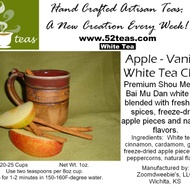 This one is for Cofftea. Though we haven’t always seen eye-to-eye on everything; she likes our tea, so she can’t be all bad.

She also suggested we create a chai from white teas, and add apple and vanilla notes. So, we blended some of our finest shou mei and bai mu dan white teas, cinnamon, ginger, cardamom, pink peppercorns, freeze-dried apple pieces and natural apple and vanilla flavors. Sounded like quite a lot going on to me, but having just sampled the results, I have to say it’s delicious. (Don’t go letting that go to your head, Cofftea!) I would personally recommend it as a naked tea, since milk and sugar are usually added to bring out the spice flavors in a chai, and with this white tea base, they are pretty front and center anyway.

Accidentally made this quite delicious today. Nearly 2 teaspoons to my Perfect Tea Mug (12 ounces? 14?) and an accidental 4 minute steep. The white tea is lost under the flavours, but the chai aspect is really shining. I get cinnamon and something sharper on the back of the sip. Apple is generally lost, as is vanilla but if I think of this as a mild chai it is a success. About halfway through my pouch, which is nice. I need to finish a few teas already!!

Tried this with some rock sugar today. The sugar brings more flavor out of the spices. I will have to try a second steep without to compare. Not much else to say. My brain is telling me I need to sleep. Too many mornings up at 3am to get to work at 5 this week. When does Friday come?

Ouch! I didn’t sleep well the past 2 nights so I can relate.

Soon. Friday will be here soon. Not as soon as we want, but soon.

This is a decent offering from 52Teas but not my favorite. There is something a little off balance with it, but I can’t quite put my finger on it… going to need to spend a little more time with it and see how this relationship develops.

Thank you Meghann for a sample of this tea!

Is it Thanksgiving or Christmas yet? That was the first thing I thought when I saw and took a whiff the leaves. Its a blend full of color and texture. I kept staring at the blend before I put it into my teapot. The colors… red and pink… dark and light greens and white… the cardamom pod that I wanted to crush (I like crunchy sounds…) but didn’t. The texture… fuzzy, smooth, hard, soft…

Ok the smell is so appetizing. It is sweet and spicy, and it isn’t offensive or overwhelming.

The taste is light, sweet, and spicy. The steep is a very light yellow. I can definitely taste the cinnamon and other spices; the vanilla added warmth to the blend, and the apples, despite the light taste, added sweetness.

In my boyfriend’s cup, I added some sugar since he almost always drinks his teas with sugar. I tried it, and it isn’t that bad. This tea doesn’t need sugar or milk though :) YUM!

Recently, I’ve become a fan of chais, after avoiding them for years. I used to go without tea if all that was available was a chai blend. Meghann sent me a sample of Frank’s Vanilla Bean Cheesecake Chai a while back, and I’ve pretty much been trying every chai since (though I really, really like the Vanilla Bean Cheesecake Chai and think a decaf version would be awesome…).

Meghann tucked a sample of this into my box for me to try. Since I’m fairly certain I’ll be placing a 52teas order this week, I wanted to try it out to see if I needed a pouch for myself.

And I do. The spices are front and center, but are by no means overpowering. The vanilla adds a smoothness to the blend, and the apple a crispness. And I can still taste the white tea base. It’s both festive and soothing…gently waking me up (or is it lulling me back to sleep?). Yes, a pouch (or two) of this must be mine. Thanks, Meghann: best box of tea ever!

Oh, I want it so bad in decaf…

Yay, I"m glad you are finding some more chai’s you like. They’re not ALL bad:) This one is good. I think it’s nearly time for another pouch for myself. Will have to see what comes of Franks TOTW this week first.

what I mean by that is I like that the spices are subtle and work with the white tea much better than I thought. The Apple is the prominent flavor but I’m not getting any vanilla, really. The peppercorns linger a tad but it’s not distracting.

Overall it’s alright…I enjoy it…wondering what it would be like with (more) vanilla tho!

Maybe add sugar-free vanilla syrup? I wondered about this one myself – apple is such a delicate flavor, so I wondered how the cuppa drama would play out…

Maybe vanilla almond milk? No, hemp would go better with apple. Almond milk can be strong. I love the idea of a subtle white chai too. I love chai but I always make them to strong to go with softer items like pears.

I got to try this one on always lovely Tea Tuesday. Yes, lucky me, I live here in Wichita. :) I had it naked and iced. I enjoyed the “spiciness”. The cinnamon, cardamom, and vanilla meet you first. Is there a lot going on in this tea? Yes. Is it an enjoyable lot going on? Most definitely.

For me, the apple was a little lost in there. It was detectable, but not easily. And as mentioned, it is sweet (but not overwhelmingly so) as is, yet I wonder if adding sugar would help bring out the apple?

Yum. I envy that you live so close! Can’t wait until this one reaches me by mail!

I love and appreciate the review! I’m not going to cave until I get the tea for my best friend’s wedding favors (which this was made for). She’s going to give it out w/ a honey stick so maybe desolve a honey stick in it and then chill… or possibly just a tiny pinch of sugar in the raw. Those are the only 2 sweeteners I’d suggest using.

Too bad I don’t have a stovetop at work, I bet this would be nice made that way.
Nice this way as well though.

FINALLY reviewing this! There are several reasons it took me so long. For one, I didn’t order any so I had to wait til I got to WA. 2nd, I wanted to make sure we had enough (ended up NOT being a problem… there was 3/2 pounds and we didn’t even use half of it lol) 3rd, after seeing and smelling that much of one tea I needed a break. 4th, I really wasn’t in a location to have good control on my water til I got home. 5th, I’ve been suffering serious jet lag/post vacation depression and just not feeling well in general since getting home on Tues. And last- the Beckners get home from their honeymoon tonight so I thought it would be good to save it and celebrate:)

Ok… on to the tea. Served as packaged: 1tsp/teabag (there were 2/favor) plus one honeystick (again, 2/favor)

The tea itself is, as someone said, very Christmasy in appearance. The aroma; however, is off. Almost… potpouri-ish…? But that could be just from smelling such a large amount of it.

When people think “white chai” most automatically assume the spices will overwelm the tea… but from the appearance of the steeped liquor, I doubt that will be the problem. The aroma is of apple and vanilla and a darker and more dull brown than I expected. The flavor is much like the aroma. The apple hits me first. It’s; however, the most authentic apple flavor I’ve encountered w/o it being candy-ish. The vanilla lends a sweetness that isn’t artificial either. The added honey makes it a bit too sweet for me. Honey is one of those flavors that I only like as an added flavor in tea. (Anyone else have flavors like that, or is it just me?). Unfortunately the best things I can say about the spices is that they prevent the tea from being bland. The base (specifically the shou mei I’m thinking) prevent this from tasting like an apple chai or even an apple cider tea. I’m rating this pretty low, but I think I might be able to boost the rating if I had more to tinker w/. I need to e-mail Irina and see what happened to the rest of the tea. Hopefully she can send me some. I’m just not satisfied at how unsatisfied I am w/ this yet.

I made this tea to enjoy this afternoon. It has been a busy and emotional day! My baby turned ONE today! We had a mini celebration at lunchtime (we have two parties planned for this weekend) So after the sugar rush while she was napping I made this to comfort me trying to hold back my tears that my last baby is one! It was such a great comfort tea! It reminds me of the holidays. Really loving 52 teas!

Glad this tea brought you comfort! And also glad it reminds you of the holidays… that’s exactly what I was going for since it’s going to be wedding favors for a Dec. wedding.