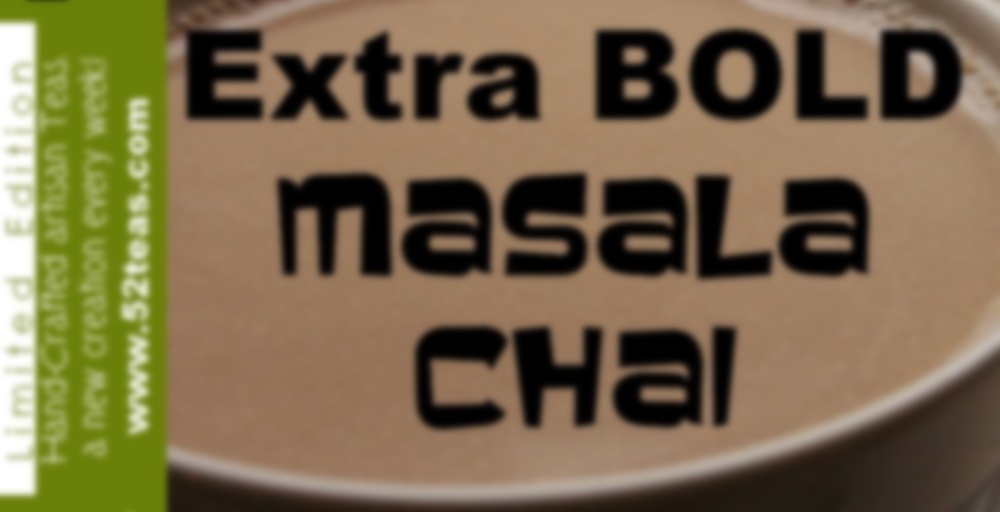 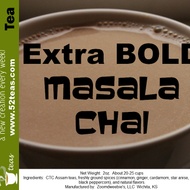 I have a confession to make. Early on in my tea career, I did not make my own chai. I just didn’t feel confident enough that I wouldn’t mess it up. Well, I have been making our own chai for a few months now and experimenting with a few things. And I received this message from one of our customers via Facebook:

“I’m dying for a powerful traditional chai blend black tea with all the works – no frills with chocolate or vanilla. Cinnamon, ginger, cardamom, cloves, black pepper, anise seed. I need it potent in its flavor. This is not Grandma’s tea. I want an Indian man from India to drink it and when he closes his eyes to be as though transported to his childhood kitchen.”

Well, I have accepted the challenge, and here is the result. We started with a hearty blend of CTC Assam teas (used in our RadioactiviTEA [I was going to call this RadioactiviTEA Chai, but given the recent happenings in Japan, I was afraid this might not sound so appealing]) and freshly minced spices including cinnamon, ginger, cardamom, star anise, clove and black peppercorns. I ran all of the spices through a coffee/spice grinder so they would mingle better with the ctc tea (and to release all of their goodnesss), and I think my office is going to smell like chai for months now (not that I am complaining).

This is the boldest chai you will find anywhere. Spicy, malty, DELICIOUS. You do NOT want to miss out on this.

Re-visiting this, more than a year later. To avoid smell contamination I had put my bag into an empty tin and promptly lost it at the back of the cupboard. I remember it being bitter and over-bearing, so I’m steeping it in slightly cooled water for about 2.5 minutes. I’m using a tea-sac as there’s no way this could go in my strainer. I have raw sugar on hand to sweeten as necessary – I’m prepared, right?

First sips are spicy and bitter, puts me in mind of gingerbread men, I’m picking up ginger/nutmeg/cinnamon spices. A bit of sugar later, and I’ve got a cup that’s more bitter. What? Okay, let’s add more sugar…Well, it’s sweeter. It’s too sweet, actually. It’s covering up any potential flavour. This tea has always been finicky for me. Weirdly, I get a tonne of astringency underneath the sugar so it didn’t even work. If anyone has expert tips on making this one work, I’d love to hear them. I wish I had honey at work as that might have helped more, but alas..

EDIT to add: I don’t like milk, which is why I didn’t do the obvious and add milk to it. I can stand a little bit in my tea but it needs to be very small otherwise blech!

Had a delicious cup of this tea this morning. It is really a great way to wake yourself up in the morning. Although I think it is a better fall/winter tea because the spices are a little intense for a boiling August morning.

I wonder if the flavors would translate well into an iced tea – has anyone tried it?

Boiling 5 min, 0 sec
Yours I Like This
5 likes
5 comments
Edit

I still haven’t worked up the courage to try it hot, and I’ve had it a few months!

@Uniquity don’t be afraid of it! Its strong but it is definitely delicious!

@Ashley thanks – I will definitely try that out

so delicious! so much that I majorly stocked up. lol

When I received my package today from 52Teas, I had hoped that it was my Justin Bieber tea, but, I am quite happy that this arrived (and my daughter will be happy that the coconut cheesecake arrived too).

This is indeed EXTRA bold! A very finely ground tea which I found a little surprising since I’m used to big leaves and chunks of things from 52Teas. But the fine grinding helped to extract the most flavor from both the tea and the spices.

I can taste each ingredient and they are in nice harmony in this blend. It is strong, it is BOLD, and it is delicious! Glad I decided to get this one!

After reading your review I ordered two of these. I’m really excited about getting to try it out.

This is a weird one for me. I don’t care for how it smells; it reminds me of something that gives me a headache, so it’s kinda like the power-of-suggestion. But the taste. My GOD. It’s phenomenal! It redefines Chai. It brings other chais (minus my beloved Teavana blend) to a whole new level. I added just one Splenda packet…maybe this would be good with milk? I honestly don’t know. I bet it would be good with eggnog silk, though. Anyhoo, I was getting ready to snub this tea for its smell, but one sip and I’m hooked.

Oh thank Heavens. I caught some on the reblend and can hardly wait for it to arrive…I’ve never had 52Teas Masala Chai (or any other than apple vanilla white chai and gingerbread chais, which I love!) but I love most chai and am constantly expanding my collections.

This was probably the best cup of tea I’ve had in a long time. While steeping it filled my entire apartment with the warm smell of spiced chai. It was fantastic.

I caution you, though, that this tea is not for the faint hearted. It is powerful, it is aromatic, and it is delicious. I, unfortunately, ended up being extremely allergic to something in the tea…But I drank it anyways. It was that good.

Wow, this really is an extremely bold Masala chai, which I adore. However, while the flavor is very good, there is a little too much cinnamon and not enough cardamom for my tastes. It still makes an excellent cup of chai though and does and wonderful job of waking me right up :)

So, as you may or may not know, I grew up drinking chai. Specifically, I grew up drinking my mother’s masala chai, and because of this, very few chais ever taste right to me. Why I bother trying them rather than hauling out the stovetop pot+ tea+masala, I’m not sure (convenience, maybe?), but they tend to fall short. This one gets an A for effort. It’s strong, you can taste the spices, and it gently warms your throat as you drink it. But the combination of spices is not my favorite (it’s really heavy on the cloves) and actually reminds me more of mulled cider than masala chai. There is a hint of sugar (which might also be contributing to the thoughts of cider). The thing I like best about this tea is the black tea base – it’s a very good, strong Assam that I would love to use in my chai. All in all, pretty decent but not something I’m planning on hunting down. Which is good, because I have a feeling it would be hard to find, like the majority of 52teas limited tea blends.

Thanks to LiberTea for passing on a sample!

All I had was a single sample pouch. It was just enough to make a single pitcher. I boiled my water and steeped the tea for just about 3 minutes. Then I placed the pitcher in the refrigerator overnight to chill. I’m drinking it plain without milk or sweetener.

This is a really good chai. The flavors are so well blended and smooth. There is no bitterness or astringency. It’s not terribly bold, but maybe that’s a matter of leaf to water ratio or age. I can see from the other reviews that it was blended some time ago (2 years?). Perhaps it has had time to mellow.

Let me first state that it had been a while since I’d last had masala chai. Eventually, I’d like to start making my own chai blend, and when I do, I want it to taste just like this.

The problem with other masala chai blends that I have had is that they lose some of their power and flavor when combined with milk. I love that with this blend I could add a little milk and honey and still have my spice too.

I ordered more pouches! I’m in love with this tea. Cheers, Frank!

I’ve spent a long time looking a for a Masala Chai that is strong enough to hold up the vigor of sweetened milk, foam or the odd touch of caramel.

Having tried all the major brands, I came away thoroughly disappointed. Cinnamon or cardamon dominated all of them. Then by chance I stumbled across this fantastic blend. I was a little skeptical at first but as I looked at the outstanding reviews I decided to be bold and order 2 packs. Since then I’ve been in love with this tea. No other blend I’ve tried can hold the flavour of the spices in such a delicate balance and still maintain such a robust flavour. It can withstand milk, sugar and foam, all of which tend to mute the intensity of blends like this.

The only complaint I have is that it does require a pretty long steeping time to really achieve the heights of its flavour.