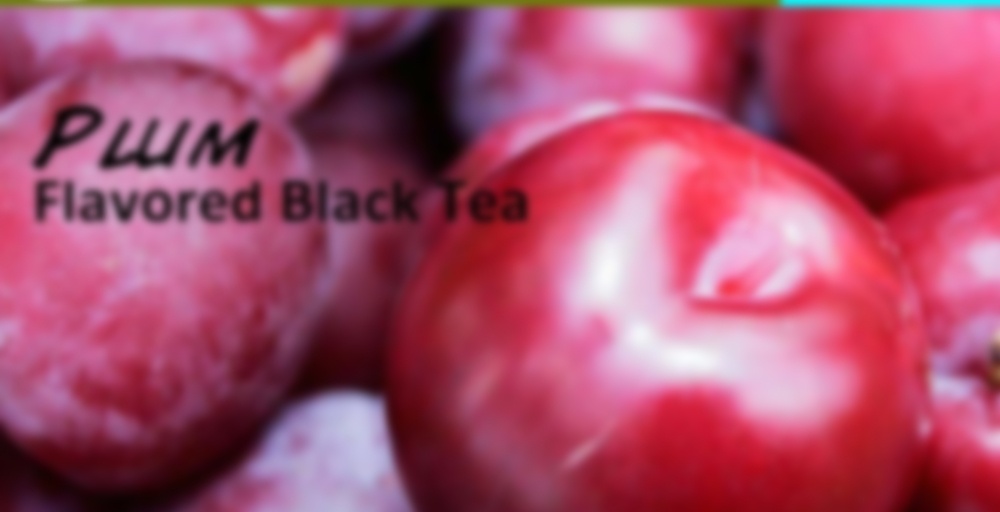 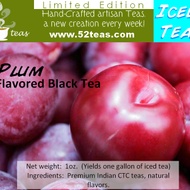 Another sample from Rachel’s sale. thank you! I was actually surprised that most of the 52Teas samples were ones I hadn’t tried before. I’ve had little samples here and there for a ton of 52Teas.

Two teaspoons in a quart for a couple days — not as much flavor as I would have liked (the dried leaves actually smell very plum) but the flavor that is here is delicious. This is a cut-tear-curl black tea so of every black tea iced, this probably would have the most flavor. Also, the black tea probably tastes like plum on its own, or lends to the flavor a bit. I really like it! Very nice! I don’t know if it is because it is 90 degrees here or because I really like this, but I almost want to make another quart of this right now. MOORREE! But I just put Neapolitan in my mason jar, so maybe next time!

OK I must really love this tea (plus I’m quite thirsty)! I brewed this up last night for today’s iced tea consumption, and the half gallon is nearly finished! It is really yummy.

The black tea is the strongest flavor but I like the way the plum comes through, it lingers in the background and there is a tart-yet-sweet plum aftertaste.

Thanks, you just helped me decide what to make next. :-)

you’re welcome! You won’t be disappointed by this one!

Ok so I really wanted to love this and I can say with confidence that one pouch does not make 1 gallon. With this and the watermelon I followed the directions as stated and made a gallon in both cases. Unfortunately, in both cases they felt watery and there was virtually no presence of ant black tea. On the plus side when I did taste the plum flavor it was dazzling. I just need to test on my own but do feel like I have wasted two pouches so far. :-(

Really? I actually managed more than 1 gallon from each pouch. I didn’t follow the instructions on the package, though. I used about 3 teaspoons of tea and steeped in my smart brewing device. Steeped the first infusion for 1 1/2 minutes, second infusion 2 minutes, third infusion 3 minutes, and the fourth 4 minutes (resteeping the same measurement of leaves each time). Then, I used room temp water to fill the rest of the half gallon pitcher. I added ice cubes to each glass of iced tea, and the tea had a very pleasing strength even with the ice cubes.

I just don’t know what to say. I will try again but it just such an expensive trial and error process.

This makes me sad. I really wanted these to be simple and easy. It is a full ounce of a very stout CTC tea. It should be plenty of tea to make a full gallon. Did you bring the water to a FULL rolling boil? Did you steep the tea loose and pour it through a filter after it steeped?

I had issues with a watery watermelon, too. Then I made the prickly pear and it came out much nicer. I found that if I filled the Breville and steeped for 10 minutes, then I didn’t have to add as much water because I had a large amount of really strong tea and when I added ice cubes and water it was much better. I guess my recommendation would be to make as large a pot of STRONG tea as you can and then add the remaining water and ice cubes.

Frank – I made it in a separate container at extra strength and filtered it into a larger one gallon container with water. Don’t understand it.

Thanks for this sample go to iHeartTeas for sending it to me and Frank (52teas) for emailing me brewing instructions on a tea that is 2 years old.

I decided right off the bat that I wasn’t going to rate this tea. I knew ahead of time how old my sample was and just assumed the quality may have suffered a little since it is so old. I did want to put my 2 cents in though.

Since the chances of coming across this tea again was unlikely I split my sample in two and steeped it two different ways.

First Batch (Frank’s instructions)
“I would steep it loose in a medium-large mixing cup full of boiling water for about three minutes, then pour it through a fine strainer or coffee filter into a gallon sized pitcher (or two 2qt pitchers), top with water and ice and serve.”

Since I divided my sample in two I followed the above instructions using half the amount of water, steeped in boiling water for 3 minutes, and poured though a coffee filter into my pitcher. I then topped with water and added a little bit of ice.

I thought this batch turned out a little watery, but then again, I like my iced tea on the strong side.

Second Batch (cold steep using aprox. 32oz of water)
I steeped this for about 4 hours before drinking it today. I like the way this turned out better using less water. Cutting the water in half gave me a much stronger tea which was more to my tastes. I never really did taste the plum, but that could just be due to the age of my sample. I did really enjoy the black tea base for this though.

Post-Steep Additives: agave nectar, sweeter but the flavoring is still a background