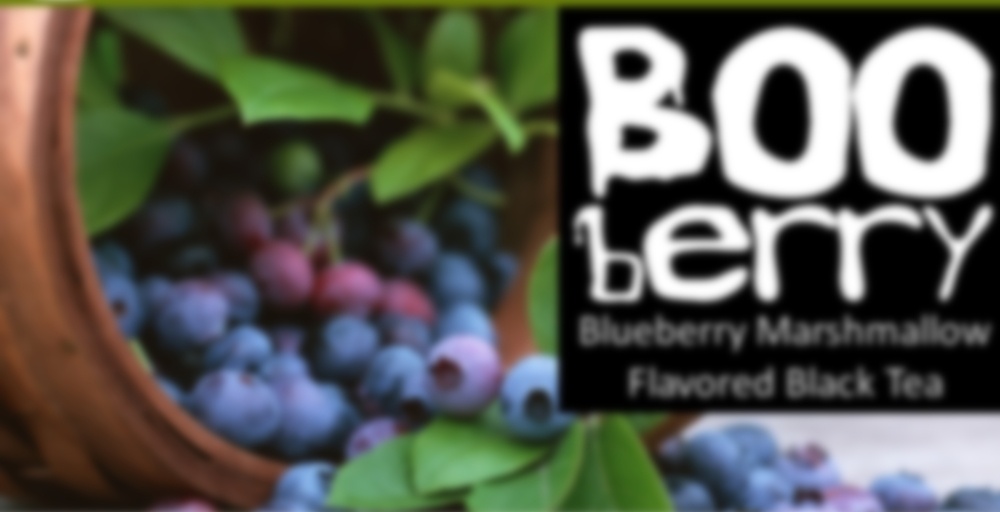 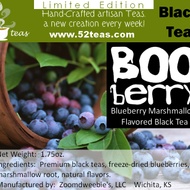 I’m pretty sure you guys are probably tired of hearing me say “Don’t miss out!” but seriously, don’t miss out on this one!

Last night, I brewed a pitcher of this for the refrigerator and have been enjoying this as an iced tea this afternoon. It is SO MUCH better as an iced tea, the flavors really pop. I can taste the blueberry and the marshmallow, and it’s really quite delicious. For that, I am raising the rating just a bit.

I was wanting to try this one when it was blended the first time, but I was woefully late to the party and when I got there it was all gone. All of it. Nothing left for me. But then after a few weeks I saw that it appeared to have been reblended because suddenly there were two pouches of it. I hurried up and bought one of them. Lucky for me Frank happened to make a tea of the week that caught my eye that day!

And so, this was this end of the pouch. It has taken us exactly three days from we opened it and until today where we say good-bye. Okay, yeah, it’s the large pot that we share, which means I use a lot of leaf, but still… Sad-face.

The dry leaves smelled like sweets. They were berry-y and tart and ever so slightly sharp and nose-stabby, but still sweet. After steeping it’s more berry and marshmallow in even quantities and quite sweet. The marshmallow standing out more in the wet aroma had me a little worried. I don’t really want hot marshmallows, see…

The flavour killed any and all concern regarding the marshmallows. It’s primarily blueberry with a smidge of marshmallow on the side. A plain honest fruit tea and right up my alley! Also, ‘Boo-berry’ is lots of fun to say!

We have really really liked this one, as is evidenced by previous mention of how quickly it’s been used up. The boyfriend had a moment of shock, I think, when I told him to say goodbye.

Three days?! That must be some sort of record. It usually takes me a couple months to go through a pouch (admittedly I’m also drinking other teas at the same time).

I know! I think I might actually have to have a look at my usual leaf to water ratio. It seems to have gone gradually heavier on the leaf lately.

I thought about you all day. When will you arrive? Maybe today is the day! I ran home from work and opened my mailbox to find, not just my highly anticipated BOO-berry, but also the new Strawberry Pancake Green Tea!!!!!!!!!

Wasn’t I just saying yesterday to someone here on Steepster that it would be lovely if 52teas made a strawberry or blueberry pancake blend? Now I get the best of both worlds! And oh, my BOO-berry! You’re so good! Just how I imagined, and yet better at the same time!

This is the best day ever!!!

Pretty tasty but not my favourite :D This came in my 52teas calendar :)

It was a cup of black tea…with hints of blueberry. I do not like the black tea base 52teas uses. sigh

Boiling 2 min, 0 sec
Yours I Like This
4 likes
5 comments
Edit

Agreed. The few I’ve tried from 52teas have been…not so great.

@aisling of tea – It only applies to his back teas, his whites and greens and rooibos i always adore!

If you still have any left and want to trade for something, let me know. Sounds like you didn’t like it too much.

@Kristin already sold it on teatr.de

Aww. :) I figured it couldn’t hurt to ask; esp since I have some good stuff in my cupboard.

This tea has a fantastic blueberry flavor paired with a good solid astringent malty black tea. I really enjoy all the blueberry teas from 52Teas because the flavoring is so authentic and doesn’t have an artificial flavor or aftertaste. The aftertaste of this tea is clean with a sort of malty blueberry flavor. I remember this having more marshmallow flavor back when I first bought it, but now that seems to have disappeared. The blueberry flavor has remained really good though. So, this is more of just a plain good blueberry tea now.

I brewed the tea hot with 195°F water for 4 minutes and put the tea in the refrigerator overnight to chill. I am drinking it chilled.

haven’t tried this one yet! (i have a wee sample)

I hope you enjoy it!

I just opened the pouch of Boo-berry, I’ve been hard at work trying to finish the entirety of all my stash so that I can focus on getting fresh teas. I’ve changed my attitude on the procurement of tea for the past while, and that’s partly the reason I haven’t made a great amount of entries on Steepster lately. I realize that if I have a big collection of tea that gets stored for long periods of time, you won’t ever finish any and thus you will have a whole bunch of teas (probably past their prime) sitting in your shelf for 2-3+ years. I opened up a pouch of green tea earlier this year that was at least 3 years old, and it really didn’t taste good anymore, so much to the point that I threw the whole package out.

So now, I’m determined to finish what I have first and then procure more along the way.
I’ve been looking forward to this one (I love blueberries!) but it has been somewhat of a letdown. The taste doesn’t really come through after steeping, from dry leaf it smells great and full of flavor but that doesn’t translate into the finished product. The tea comes out slightly astringent and mellow. It’s fully drinkable, but lacks the bang and the wow that I was expecting. I don’t taste the marshmallow at all, perhaps there’s not enough of it? Or perhaps I’m not picking up that flavour profile.

I love blueberry black teas and this one elevates it to a higher level. Boo-berry was always my favorite cereal growing up-this is obviously a healthier alternative ;)
The marshmallow is mellow, but it’s definitely there. The flavor is natural, sweet & smooth and allows the black tea to come through.
I didn’t add sugar, but it could help bring out the flavors

additional notes: Good to the last drop! How the heck did this taste like actual Booberry cereal until the very end? Amazing. Syrupy blueberry sweet marshmallowy goodness. I will miss it! This and the Frankenberry – essential Frank’s 52teas for me.
2021 sipdowns: 32

Thank you CHAroma for this tea and for swapping! I though today was going to be more productive today but I spent almost 2 hours at the gym and then had to take a nap after lunch because I was so tired out from all the exercise ;)

So anyway after waking up from my nap it seems like a cup of tea is on order. The dry leaf smells so much like I recall Boo-Berry tasting, of course it has been years but yes it smells like a blueberry flavored cereal. As for the flavor, I am definitely getting both the blueberry and marshmallow, but I felt like the black tea base got kind of bitter. I used boiling water and steeped for around 3 minutes and also used a pretty big sample for a large mug of tea. Anyhoo, I liked this better after adding soymilk and a little coconut sugar which helped cut down on the bitterness a bit. Not my favorite thing from 52 yeas but I am enjoying the blueberry flavor.

It is really old so that may have contributed to the bitterness. Wow, 2 hours in the gym?! Those days are past for me! I’m lucky to get 30-45 minutes in now. You go girl!

CHAroma- that is really rare for me but I want to start doing longer hikes and am trying to build up my stamina.

That’s awesome! I’m concentrating on speed right now. I’m pretty out of shape after giving birth to my daughter 6 months ago, so I can only run about a 12 minute mile. I’m trying to run faster each day till I’m under 10 minutes. I’m basically doing intervals to push myself a little faster. It’s hard but worth it, right? That’s what I tell myself anyway. :)