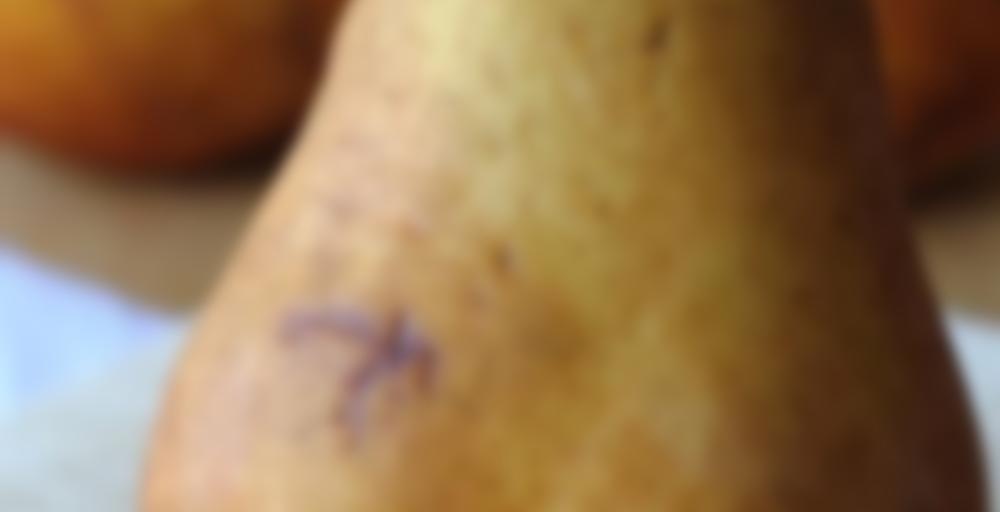 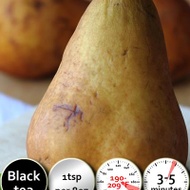 I don’t think I’ve ever had a really good pear-flavored tea, so I was curious to try this one. I found it pleasant, but lacking in a genuine pear taste. To me, this was more like an apple pie tea…heavy on the cinnamon with a fruity flavor that reminded me more of a baked apple than a pear. It’s good, but not what I was hoping for.

This is my first review from the Here’s Hoping TTB! I don’t think I’ve had a cinnamon-fruit flavored black tea before (the closest thing I’ve had would be chai, I guess) but I expected to like it and I did, so no disappointment here.

The leaves have a cinnamon smell and a mellow fruity smell, which is just as expected. The tea tastes mostly of cinnamon, but not overpoweringly so. I drank a few sips and wondered where the black tea flavor was and then discovered that I could still detect it under the cinnamon if I tried. The pear flavor was very pleasant but it kind of hid under the cinnamon at first, until I added sugar and milk. The milk muted the cinnamon flavor considerably and complemented the pear flavor, but I also discovered that adding sugar and milk to this flavor combination creates a tea that reminds me of nothing so much as a really good apple-cinnamon oatmeal. :) But if you don’t object to that mental association, it’s a very enjoyable tea. I could see myself drinking this on a semi-regular basis (although I couldn’t find it listed on the 52 teas website, so I’m not sure if it’s actually available or not).

This is exactly as promised for me & exactly as I expected: Pear! Cinnamon! The pear is almost like apple though. I love the cinnamon in 52Teas and I find it masks the black tea base better. I like this one. It hits the spot! I wish I remembered exactly how I steeped this one, it seemed the best it could be and not many others here seem to have luck with it. Speaking of cinnamon 52Teas blends (PGB), I just started reading The Hitchhiker’s Guide to the Galaxy today! Already love it. Not much else to say about this one, but it delivers. I guess I must mention though that any 52Teas tasting notes I’ll be writing in the near future are for Frank’s blends and not the new ones. I haven’t bought any of the new ones yet, but my cupboard thanks me. :D
Something like?
Steep #1 // 1 tsp // 7 min after boiling // 1-2 min steep
Steep #2 // just boiled // 2-3 min

The pear flavouring in this tea is so good! I’m surprised every time I drink it, because it’s the only tea I’ve actually been able to taste the pear in. Cinnamon is always a winner for me too. It’s a shame I’ve only got enough for one more cup of this, and I don’t fancy it’s chances at getting a reblend. Oh well, it’s as good as it ever was so I’m happy to have what I have remaining. Poached pear yumminess. Mmmmmm.

I’m considering bumping the rating up from 82, because it’s consistently delicious. Yep, I’m doing it.

Whoops, while looking for this one in my cupboard I found a few teas that I sipped down a while ago and forgot to remove…

So, after having this cold brewed several times I finally tried it hot! Though, with milk ‘cause I was sharing it and Shauna asked if we could add milk to it as well. Who was I to say no? It was solid enough hot though; I found it very smooth sipping and pretty peaceful/easy to relax with. Cinnamon is one of those flavours that I tend to associate with late night comfort teas. Downside to the hot cuppa, sadly, was that the pear flavour really didn’t come through that much/well. It was pretty well just cinnamon tea. Good cinnamon tea, to be fair! But when “pear” is in the name you DO expect that flavour.

Also, thanks again Kittenna for the sample!

This is from my 12 Days of Christmas box, which I started ON Christmas Day.

Why? Well I learned that that’s when the 12 days of Christmas actually are (my husband was quite adamant about it since apparently it’s a thing where he is from). Plus, I had the 24 days of Christmas box from David’s Tea, and I liked the idea of doing them both in tandem.

So, today is day 7 of the 12 days. I’m happy so far with all of the varieties included in the box. No tisanes yet! David’s was about half tisanes it felt like, and I gave them away.

Now, one more important thing. I have stopped putting sugar in my teas because I am trying to eat better. But, I still don’t like the straight yet. So I am using Splenda. Yuck, I know. But there you go.

So, on to this tea. It’s not bad! I definitely get pear, but don’t taste the cinnamon. There is a weird aftertaste that I am attributing to the Splenda.

I used to sweeten all of my tea. Then I switched to agave nectar because it tasted sweeter to me (though has a bit of a distinct mapley flavor), and because it was easy to go from adding a few drops to one drop, and now to none. Splenda wasn’t an option for me because I can’t deal with the aftertaste and other fake sweetener gave me headaches. :(

It isn’t is my family, really, the Christmas days thing. Well, it is to the extent that my mother has never taken decorations down until Jan. 6th so that’s what I do as well (they go up on the first sunday in advent if I remember. Yes, even if that falls in November!). Many people seem to find that very late. Some people consider Christmas over as soon as Christmas Eve is out of the way. I suppose some people are just less festively inclined… I shouldn’t like to be one of them myself. :)

Another from kittenna this is a cinnamon tea….not getting much pear though. I didn’t dislike this base as much as i usually do with frank’s teas…but it’s still not delivering on what it promises to be. This is really just a decent cinnamon tea, with a slightly “something” taste in the background that mutes the cinnamon a little. Still happy to try it and enjoyed the cup tonight…just not what i wanted it to be.

A 12 days of Christmas tea from the box.

I bought a vintage (roughly 60’s) Italian Cyclo commuter bike today as my means of transport, my new house had lots of fields surrounding me and the nearest shops are some distance away. With a bit of tlc my new bike will get me to the shops and back in ease, it can also take me to my craft club and to visit my parents. Looks like it will be my new hobby next year.

This tea smells very sweet but more like apple than pear, it has an unnaturalness about it. Behind that there is a hint of cinnamon and spice, enough to be warming. As a whole it smells like an apple pie/tart but without the crust.

In flavour the black tea is thick and malty which over rides some of the sweetness, though again I still say it’s more apple like than pear though granted they are very similar anyway. The cinnamon is very gentle against the thick black base.

In essence it’s a black tea with a bit of flavour rather than a flavoured tea with some black. I think it would have been nicer with a lighter base such as a baked/dark Oolong.

It’s ok but nothing special, the black base prevents any greatness from this blend, it’s as though it was just a rushed creation made for cheapness sake. Despite that it is drinkable at least.

Yay for a new bike!

the smell originally had me feeling this would be much fruitier than it was.
It’s still good, but a subtle blend.

7th day of the 12 teas of christmas

Post-Steep Additives:
sugar
not much change

I enjoyed this although I had hoped for a more pear-like experience with it. The black tea is a brisk and invigorating tea but a little on the astringent side. At least, with these particular flavors, I’m noticing the black tea to be more astringent than I’d like it to be. This is something that I’ve noticed with some of Frank’s blends: the black tea with some flavorings really works, while with others – not so much.

The cinnamon is my favorite part of this tea. It’s a warm, flavorful cinnamon taste. The pear, while hot, is not very distinguishable. Once the tea cools slightly, some of the pear notes emerge but I’m not really wild about the pear flavor. It almost taste artificial. It isn’t until this tea has been chilled that it becomes much more enjoyable.

This tea works well as an iced tea – not so much as a hot tea, though.

I definitely noticed that tendency towards astringency here, which definitely didn’t work for the tea. I think it might have been better on a different base, too.