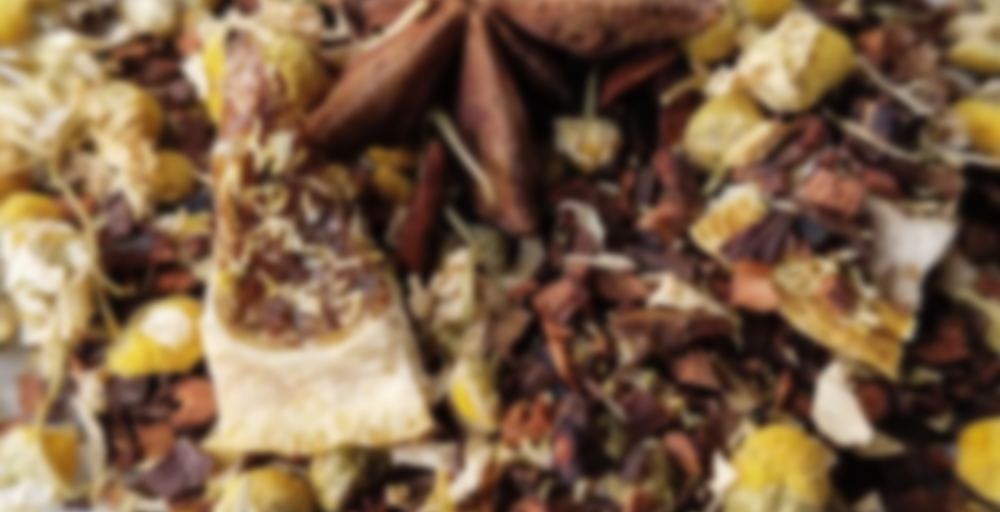 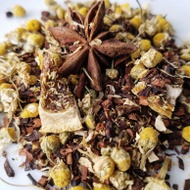 I have a confession (although, for anyone who has read many of my reviews from back when I was a tea reviewer – this probably isn’t much of a confession) – I’m not particularly fond of chamomile. Oh, I’ll drink it (on a rare occasion) but it’s not a tea/tisane that I’ll grab enthusiastically. It’s not something I’ll brew every day – I certainly don’t like it that much.

That said, I don’t hate it either. I’m just kinda ‘meh’ about it. Not my favorite thing – you know?

I’ve crafted one blend with chamomile during my time as the Mad Tea Artist of 52Teas – At Play in the Fields of Love – which I blended as a VIT for a special customer. Now, I’m crafting my second chamomile blend – and I’m blending it with one of my very favorite flavors: Licorice! I absolutely love licorice and all herb-y things related to licorice, like licorice root, anise and fennel. But interestingly enough – this is my first time blending a licorice blend. (Although, I did use licorice root in the Butter Beer reblend.) I have refrained from using licorice as a primary flavor in my blends up until now because I realize that it is a somewhat polarizing flavor – most people either love it or hate it – and it seems like it’s a even balance between those that like it and those that don’t. It’s kind of hard to create a winning blend with a featured flavor that is so polarizing.

But I’m hoping that with this blend – I’ve done just that.

One day while cruising through the internet – I stumbled upon a recipe for a cocktail called “April Siesta.” The cocktail features Absinthe which is a licorice-y liqueur and Curacao which is a citrus-y liqueur. These two liqueurs are combined with Cava (Spanish sparkling wine) and simple syrup and topped off with a lemon twist.

So this is my take on this cocktail that I’ve never actually tasted but was inspired by. I started with organic honeybush, added some chamomile (because when I think ‘siesta’ – the first herb that comes to mind is chamomile), added licorice root, star anise and some citrus (orange and lemon) wedges. I didn’t want the citrus to be too intrusive because I really wanted the licorice-y flavors to be the star of the show but I didn’t want the licorice to be so sharp that those who aren’t particularly fond of licorice might appreciate this beverage too.

I love this! I can honestly say that this is my favorite blend with chamomile in it – mostly because I can’t really taste the chamomile. Instead, I get sweet licorice with light citrus background notes. Yummy!

More like November Siesta. I don’t know if it’s psychological but I swear this is relaxing the bejesus out of me, and normally chamomile or other BS sleepy-time blends do absolutely nothing for me. Yet, not long after I started drinking this, it hit me and I really want to go to bed. Granted, I had a long, mentally exhausting day filled with an absurdly high percentage of difficult, rude, entitled, and bizarre people/interactions. Constant, non-freaking-stop. The kind of day that really questions how some people, actually, how so many people come to be the way they are, and how they sleep at night.

So here I am past midnight waiting for my dishwasher to finish up while I allow my nails to dry and I wanted some tea to keep me company and warm me up. The mere look of the dry leaf automatically wins given the fact that there is whole star anise in here. So beautiful!

I’m a little all over the place with chamomile. I appreciate its fragrance and skincare benefits, and in tea, it depends on what it’s paired with, my mood, etc. Can be a little overpowering, but I do like it here. I know many aren’t into licorice root either, and I too, while loving licorice flavours (especially star anise), find that the root can be a little tricky.

The licorice root is a tad cloying here but this is still pleasant to drink under these circumstances. I’m not tasting the star anise so much, though. To my palate, this is equal parts chamomile and licorice with a shot of citrus. There’s something cooling and refreshing about this too, in the background behind the licorice and chamomile.

I might need some of this. I haven’t been sleeping all that well lately.

Sipdown! I did really enjoy this tea. I would buy it again. It feels nice to clean out my cupboard, though. I’m aiming for four sipdowns today. I’m at three currently. There’s nothing like star trek (Voyager, for those who care) and some tea in bed on a rainy Sunday.

Haha! I’m currently in the middle of DS9, but I’ve been thinking about rewatching Voyager, too.

DS9 is coming up after I finish Voyager. I watched it about two years ago, but I need to watch it again. I’ve seen all of the series several times except DS9, so it deserves more attention. I’m such a big trek fan. Have you watched the new series?

Aw, I didn’t get to sipping the April blend in April. sigh. I won this one in the April giveaway. I had to use two teaspoons (as suggested) because there was a WHOLE star anise in the first teaspoon. Yum. That should have weighed down the sample pouch but it was still bursting at the seams. This is a tasty brew, unique for sure. I taste the star anise (licorice notes) that aren’t overwhelming as well as bright lemon notes. Chamomile lingers… wow has it been a while since I drank anything with chamomile! But I don’t hate it. Everything in this brew melds together quite nice — a nice balance of the spice, fruit and herbal.
Steep #1 // 2 teaspoons for a full mug// 12 minutes after boiling // 4 minute steep
Steep #2 // just boiled // 8 minute steep

This sounds so good. I love anything with anise. Looks like I’m finally going to have to put in a 52teas order.