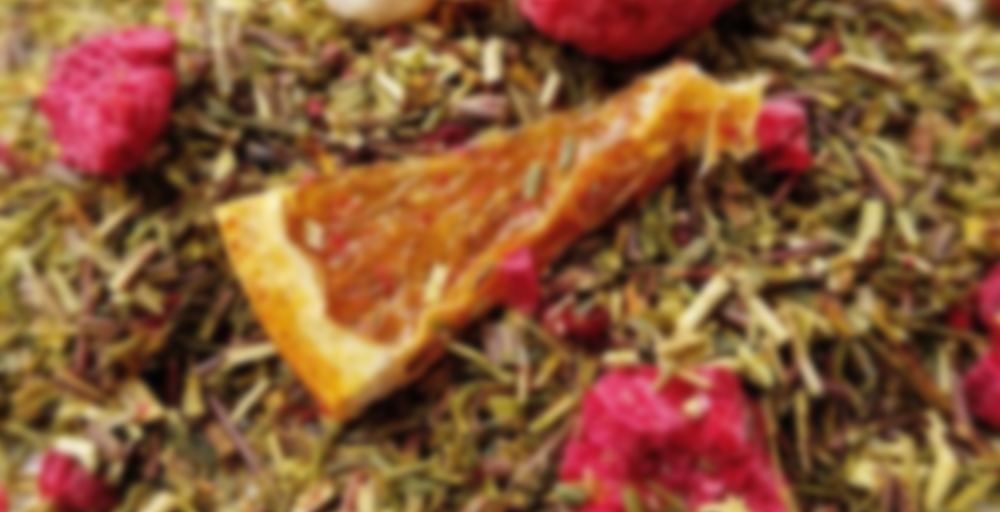 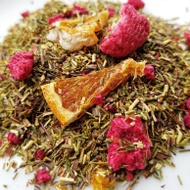 Nothing too fancy this week – but it is something light, refreshing and sweet. A perfect summertime drink. Organic green rooibos bursting with sunny orange flavor with notes of bright raspberry.

There’s not really much else to say about this except – you should try it!

So glad for this Friday night. It’s been a sad week, a sleepless week, a sickly week. Nothing’s really happened. I don’t have a reason to be sad or sleepless or sickly, but I’ve felt each of these deeply this week. So this Friday night is most welcome. I’m hoping for a restful weekend, maybe a bit productive, then Sunday I’m joining my first virtual yoga/meditation/journaling class. I’m looking forward to taking a couple of hours each weekend to center myself and focus. Tea will probably (most likely) be included in the mix. :)

I’m really enjoying tonight’s rooibos. I haven’t had much tea the last few days, but I did want something tonight. This smells like fresh orange juice before steeping and after it tastes like orangeade. I used to love orangeade as a kid! Anyone else? I don’t taste much of the raspberry, even though there were very large pieces of raspberry in the dry mix. There may be a slight raspberry flavor in the background if I really think about it, but I have to focus on it. I think I’ll just say orangeade and leave it at that. It’s delicious.

Sorry your week was trying, good thing for the weekend. Good luck with the class, I have a complicated view of meditation, I know it’s good for me, I feel better afterwards, but why is it so hard to do!

Same here – I always feel better when I take the time to meditate, but for some reason it’s hard for me to keep it in my daily schedule. Hoping this class helps with that.

I hope your weekend is going better!

I was supposed to go back to London today so I was packed and ready to go. Then my Mom said we could go back tomorrow instead. It probably would have made more sense to do it today but I wanted one more day in my bedroom with my dogs and my family so I am going back tomorrow. That meant when I went to grab tea, most of them were packed away. This one was easily accessible though so I am having it again.

I brewed up a hot cup and realized that I always get orange from this tea and that is probably due to the relatively large orange segment that makes it into most cups I have previously made. When I checked the package, there were 2 servings left and one orange slice. I decided to save the last serving, with the orange piece for a cold brew I set up and will drink tomorrow. For this particular hot mug, I balanced the lack of orange with some additional raspberry bits.

Even without the orange slice, there is still a lot of orange flavor here. There is a touch more raspberry flavor today than in other cups I had previously but more than anything I still get orange gummy bears. I don’t mind it. In fact, I think it is growing on me so I am raising the rating slightly from 68. We shall see how it goes tomorrow as a cold brew.

I’m assuming she means London, Ontario (but I didn’t realize that, if that’s the case!)

Oh, whoops! I didn’t realise there was another one XD silly me…

Sorry. London, Ontario is what I meant. Thanks Kittenna. I WISH I was in London, England because Ontario’s London is crap.

I get the same when I say I’m in Vancouver. Occasionally, a package will get misrouted because they see “Vancouver” and immediately think I’m in Canada rather than Washington State.

@Anne: Heh, at least I immediately thinking Washington, but then, I’ve lived in the Pacific Northwest my whole life so that’s the first association my brain goes, heh.

I had no idea so many US and Canadian places used the same names! The UK is so tiny we never had an issue with that, lol.

Loving the generous chunks of raspberry and orange in this blend, and am stoked to try this cold brewed, but will have to wait until tomorrow since I just put the jug into the fridge now. I’m trying it hot now and it’s not my favourite.

To back things up a bit, I will admit that I am a little disappointed in the scent of the dry leaf. It’s a little on the artificial side, especially orange, and I’m barely getting any raspberry. Unfortunately, its flavour is the same: mostly artificial orange and almost no raspberry. The green rooibos base is very faint.

Reserving rating this until I try it cold brewed tomorrow.

I received this as a sample with a recent order. Try as I might to be more open-minded about rooibos blends, they normally just don’t do anything for me. I’m sipping through my sample of this and trying to remind myself that rooibos blends are really hydrating and, therefore, good for me. LOL It’s predominantly orange to my tastebuds, despite the abundance of dried raspberries in my bag. If the raspberry is there, it’s very faint. I can smell the raspberry, but I can’t taste it. Curses!