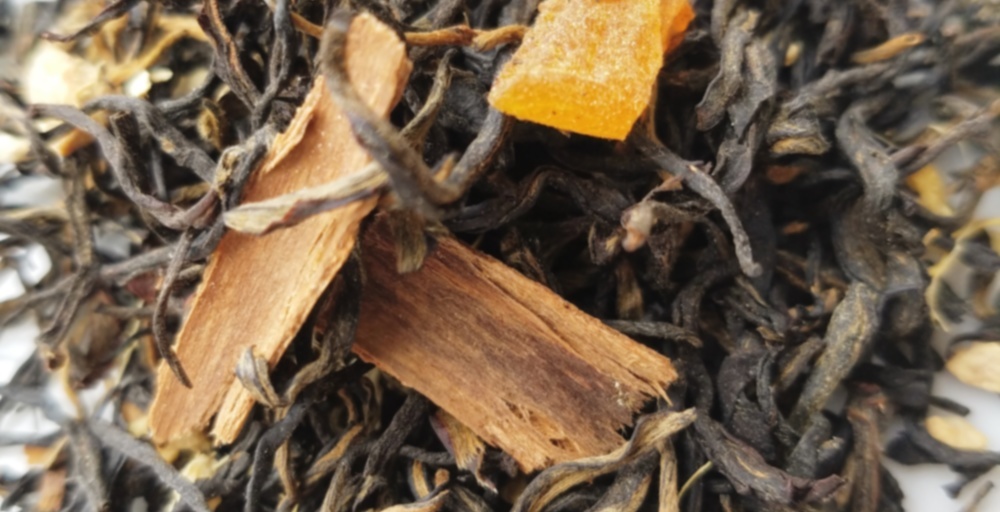 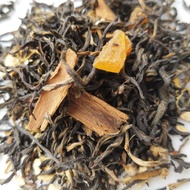 OK, OK – to be completely honest – my Gramma didn’t really make spice cake. At least, not that I am aware of. However, she was the best baker that I knew – granted, I’m probably a little biased because she was Gramma but that woman could bake a pie like nobody’s business – she made the most amazingly awesome baked treats – cookies, pies, cakes – but I don’t really recall a spice cake if I’m to be totally honest.

So you might be wondering why I named this tea “Gramma’s Spice Cake” – well, that’s because IF she did make a spice cake, this is exactly what I would expect it to be like. It would have apricots and almonds. It would have cinnamon and ginger and just a hint of nutmeg. It would be sweet and delicious – just like everything else that emerged from Gramma’s oven.

I started with a base of Chinese black teas (golden Yunnan, Fujian and Assamica grown in the JingMai Mountains) and added apricots, almond essence, ginger, cinnamon, freshly shaved nutmeg and just a touch of flavoring to create a cake-like taste. (Don’t worry, it’s allergen free!)

This tastes like a celebration of that special time of year when summer leaves us a bounty of delicious fruits (including apricots!) and fall is about to begin.

Yes, this is indeed what the spice cake of my dreams would taste like – this tastes just like what I’d expect a spice cake from Gramma’s kitchen to taste like!

Only one tasting note for this? HOW? I do remember someone on Steepster saying they loved this one, so I’m happy to try this sample. I wanted a nutmeg tea today and somehow this just happened to have it, so I went with it. Apricots even! Mmmm. I love that this blend uses three base black teas: golden Yunnan, Fujian and Assamica. (I’m also VERY glad that the new 52Teas uses the fancy black teas because I always hated the Ceylon in the old blends.) The flavors result in a lovely cup: mostly notes of apricot and hints of nutmeg. Exactly what I had hoped. I’m not really tasting the almond or cakiness. But that is completely fine, I like what I’m tasting!
Steep #1 // 1 1/3 teaspoons for a full mug// few minutes after boiling // 3 minute steep
Steep #2 // 10 minutes after boiling // 3-4 minute steep

I have made several posts on teas that I’ve posted on before and my new posts have disappeared—-no longer showing up on Dashboard but now buried in the thread under the tea name, not showing up in new posts.

In fact, this post, ie. Gramma’s Spice Cake, has been at the top of Dashboard for almost 24 hours with no new posts added. Highly unlikely that no one else is writing about the teas that they are drinking on the weekend.

And also recent activity scroll is broken and not updating either.

Yes, it’s broken. This happens periodically. I would send a note, but lately I’ve not gotten any traction when I’ve sent bug reports.

BTW, yesterday I could post notes; even though they weren’t showing up in my feed they showed up in my Tasting Notes. Today I can’t post notes either.

Yesterday I posted a Tasting Note but it never appeared in my Tasting Notes feed, on the tea page, or on my Notices feed. I also updated the tea in the process but the tea still appears in its pre-updated form in the database. It seems everything is just “locked in time” and I’m hoping all that data will be released at some point; if not, at least I write all my notes externally on a NotePad first so I have a backup!

This has been the first post on my dashboard for over a day now, lol. I tweeted @Steepster to let them know the site’s frozen.

Yay, well-done, Tabby. And yes, mine too.

I posted here because iirc there are several active journallers who could potentially do something about this.

hmm, I didn’t see any of these comments on my tasting note in the tealog until I clicked on the dashboard (so also no e-mail alerts to comments), so yes, there is definitely something going with steepster. Hope it fixes!

This is all your fault!! XD

One Gramma’s Spice Cake to Rule them All!

If any of my posts are gone or broken I wouldn’t even remember what I wrote or for what tea. O.0

What’s odd is I posted a tasting note after this one and it did go just to that tea page like Evol mentioned, and not to the dashboard or my tea logs.

The one I posted didn’t originally show on the tea’s page, but is now. It took a while for the updates to the tea page to appear. Dash/Activity/Notices/Logs/etc. still have been frozen for two days.

Oh boy. I wonder how complicated this is going to be to fix.

Wow… I can’t ever remember it getting this bad or taking this long. Even to hear anything back from Jason & team. :(

Ugh. I just bought a bunch of teas at the tea festival. Was so excited to add them all and post reviews. Now I won’t have time to do them all at once (I took yesterday off work). Hmph. Steepster… come back!!

Sorry guys we’ve had an issues where the background processes that handle all of the site activity updates had died and we were having trouble getting everything restarted. Things should be coming back online now but there could still be a lag.

Just as long as Steepster doesn’t disappear completely — thanks so much, Jason!

Thanks for updating us, Jason!

Honestly, I forgot I’d purchased this blend. I discovered it while frantically searching for my stash of Peachy Lychee (which I realized I’d shipped to, ironically enough, grandma’s house and not my home in Houston — grrrrrr Harvey!).

This is lovely. I’m glad I bought two large bags. It has reminded me how much I adore teas that feature apricots. The warming spice blend is really nice and compliments the flavor of the dried apricots quite nicely. The almond essence really helps give it that cake-y vibe. It reminds me a lot of an applesauce cake I made last year for, again, my grandma, that was heavily spiced and laden with dried fruits.

Needless to say, I’ve worked my way through most of the first bag. It makes a killer latte, but it’s a lovely hot/straight cuppa too. It’s very comforting and reminds me of my childhood spent baking, whilst perched on a little step stool, in granny’s kitchen.

How did I miss this one! How sad is that.

If memory serves, I believe it was the tea of the week at the tail end of August. I’m hoping it’ll be re-blended later this year. It’s proving to be a very cozy, warming blend on a day like today where the temperature hovers around freezing.

It will definitely be on the poll when we run it to determine which teas will be in the 12 Teas of Christmas box. It sold out pretty quickly!