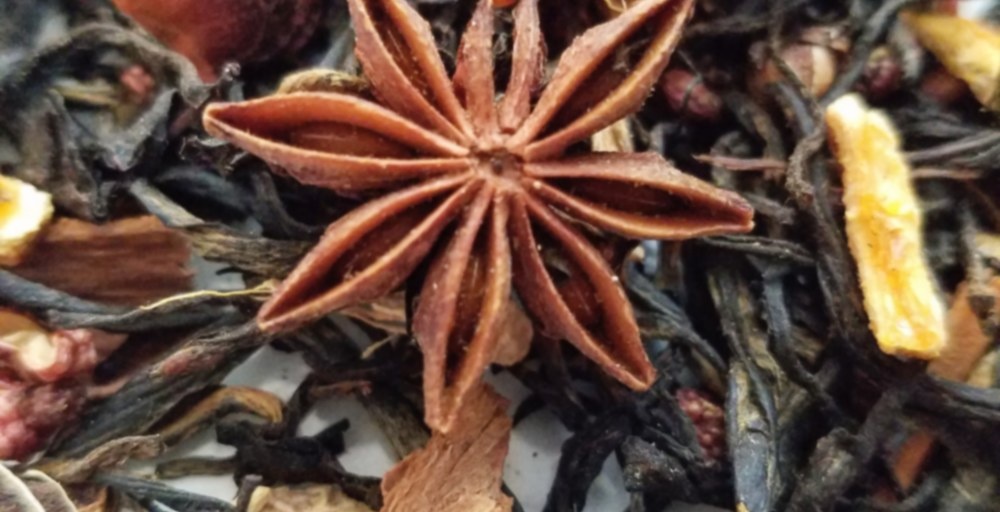 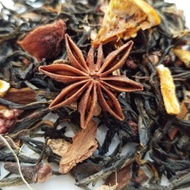 Since China is a very important part of what I do (since most of my tea comes from China!), I decided it was important to do something to celebrate the ringing in of the Chinese New Year this year (The Year of the Dog)!

I started with two black Yunnan teas – a Yunnan Black Gold and a tippy Assamica grown in the Yunnan Province – and added dried mandarin wedges and the whole spices of a Chinese 5 Spice blend: Cinnamon, Cloves, Star Anise, Fennel and Szechwan peppercorns. Then I added just a wee bit of ginger to enhance the peppery notes just a little.

I’m really happy with how this one came out – the spices are strong enough to be inviting but don’t blow out the taste buds with the spice – and the mandarin is really lovely: sweet and juicy!

Bought this because I was craving an Anise tea, and then let it sit in the cupboard for a while because this tea actually smells like the “Chinese Five Spice” you find in the spice section and your friendly neighbourhood grocery chain (sniff some McCormick and you’ve got it). It was too much and has been too much for quite a few months now.

Luckily, I caved in a year later after buying it (The dog has passed the torch to the pig), and tried it as a part of my “drink up your unwanted tea” conviction. Turns out this is actually lovely, and just the right amount of cloves, anise/fennel, ginger, peppercorn and cinnamon. (although I wouldn’t mind more citrus). It’s still on the unique side (read: savoury), but I won’t have a problem drinking up the rest!

Edit: I find once this tea is steeped the flavour and aroma profile sometimes cross over to dessert territory; this happened the other day. Tastes like cinnamon anise malt cookies.

Finished off this morning while I was getting ready for work. I felt like I could really taste both the orange and the anise; which would have been fine on its own but the rest of the spices felt weird and aggressive combined with those two notes. I added a little milk to soften things; it helped a touch. There’s also something about this blend that seems a little savory/broth like to me, but not sure what.

Ultimately, I feel relieved to have finished this one off. It’s not that I think it’s a bad blend; but it’s just so clearly not one intended for my tastes.

I’m going to need to try this again before i land on how i feel about it. I was expecting more from this one when i brewed it up, based on the smell. It’s a lovely aroma – orangey, sweet smelling….however first sip of this after letting it cool a bit is more like slightly flavoured water. There’s almost a hint of orange here…but not really. the tea base is a little weak, which is odd since i’m fairly certain anne’s used this as a base for other teas that i’ve loved. I’m tasting the star anise for sure, but the other spices seem to be hiding. Not a bad cup, but not what i was expecting. Reserving judgement for now since it’s a recent blend and might just need a little more time and b) now there’s a little more room in the package to really shake things around.

All that being said, thanks so much for your continued involvement in the community Anne :)

You need to use a little more leaf in this one because of the amount of spice in it – treat it like you would a chai and brew it with more leaf to get a proper flavor. :)

will try that next time :)

I am curious about this one. It could go either way for me. I am certainly open to this combination of flavours and wholeheartedly support Anne’s creative impulses and blending approaches. Still thinking.

And yes, I love that Anne continues to be embedded in the community. Even more reason to adore her.

Last week’s Tea of the Week – I created this one to celebrate Chinese New Year. I used a blend of Golden Yunnan & an Assamica grown in the Yunnan province as the base. I used my own whole spice version of a traditional Chinese Five Spice as the main flavor profile: Cinnamon, Star Anise, Fennel, Clove & Szechuan peppercorns (I used both whole and crushed peppercorns and cloves) and I also added a little bit of ginger root (not much – just enough to enhance the peppery notes a bit) and mandarin orange.

The spice has a nice roundness to it, with the licorice-y notes of the anise and fennel being what I taste first, but the other spices coming forward just after I pick up those licorice notes. The mandarin comes through and the Yunnan is a nice, smooth background note. I really like this.

Very interesting, in a good way, tea. I enjoyed the sweet, caramely flavor makes for a warm, slightly astringent tea. You can taste the Yunnan black tea, delicious. The sweet mandarin orange adds aroma and sweetness, of set by the clove and peppercorns, spicy in a new way. I enjoyed this cup of tea, perhaps, I’ll have another!