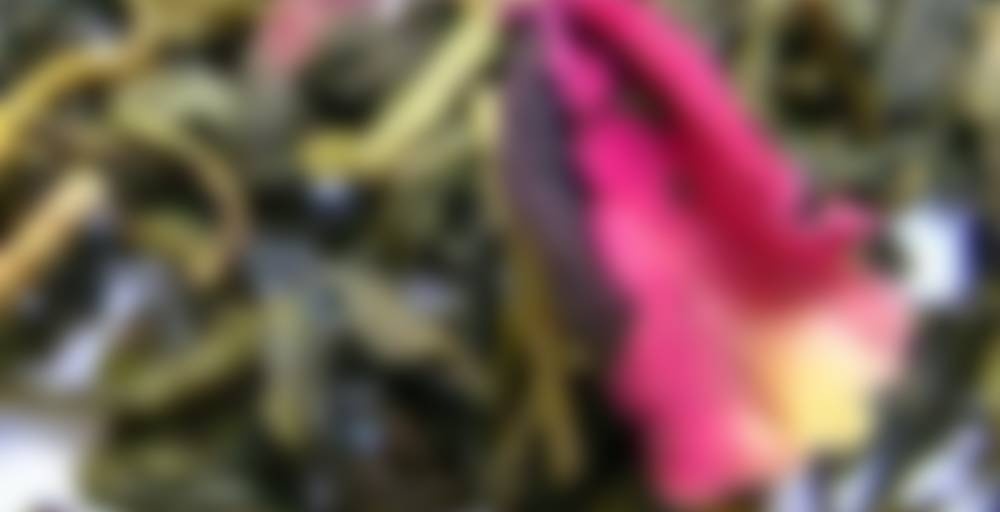 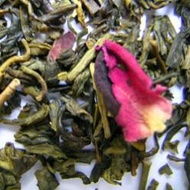 Green tea from China with a sweet rhubarb-creamy taste. Delicious as iced tea.

Today’s tea is an inspired one. I ordered new tea for work the other day, but silly me forgot to consider the delivery address. So now I’ve got a big package to pick up from the post office on wednesday (having given up on the stupid package pick up place that keeps displacing my parcels), all of which I’ll have to carry with me into work on thursday. Instead of just having the silly thing delivered directly to work! Oh well, I can steal a few samples of the leaves, I guess.

Anyway, the reason this one is inspired is because one of the new work teas is one that has nothing in common with this one except the brand, but I’m imagining it to have the same sort of creamy-sweet quality as this one does.

I’ve even managed to make it a pretty good cup today, which is good seeing as this seems to be one of those teas that I end up neglecting without meaning to. It’s so summerly and nice, I really ought to have it more often. It reminds me of visiting the boyfriend’s family and having rhubarb crumble with custard. In spite of the fact that the rhubarb is sort of not really coming out clearly in this cup. Which doesn’t really add up with it being a pretty good cup today, but there you are. I never claimed to be logical or consistent.

I just really like this. It tastes pink and girly, and I suspect that the boyfriend would dislike it on principle.

Pink and girly….on principle I would agree that the bf would dislike it…as much as I enjoyed the review, I’m inclined to stay away from it myself…on principle and all…:)

There definitely isn’t anything manly about it. :D I think he also counts it among my ‘bizarrely flavoured’ ones, and it seems things have to be either Earl Grey or extremely interesting for him to want a flavoured tea.

I’d have to side with him on that one. With the exception of Earl Greys and some jasmines, I don’t get too excited over flavored teas

Perhaps it’s a gender thing. :) He’ll take flavoured roiboos though, oddly enough, but then I don’t really care for roiboos myself, so I don’t think that really counts. :D

It’s no coincidence I picked this as my second tea to try from that massive gift batch from T – rhubarb is something I love growing in my garden and cooking with – I’ll even get excited about rhubarb cordials and lemonades, but in tea? Firstly, I feel much of the complexity of the rhubarb flavour is lost in a warm beverage, and secondly, it’s just a really hard one to mimic.

So seeing how that White Mulberry floored me, I figured I’d just go with this one now, or T will demand my firstborn or something.

There is actually a convincing, albeit elusive note of rhubarb in the dry tea. This doesn’t really stay with the brewed tea, however, and in the cup, the flavour is very subtle. It’s very astringent, bordering on bitter, and completely lacks the creaminess I expect from a cream-labeled tea.

However, I think this is one of those greens that are extremely sensitive to brewing – there are no specific instructions on the site, and T did hers at 80C/6 minutes, so I went for 80C/3 minutes, which seemed like a fair middle ground.

I’m definitely going to experiment with what’s left of the sample, but I doubt I’ll ever be able to squeeze the complexity of flavour I want out of it – much like that quince tea from Kränku, this is a bit of a one-trick pony, and an easily spooked one at that.

Even when ACP do put instructions on their site, I would advice against following them. They consistently recommend (in my opinion) FAR too long steeping times. They write them on the packets and it looks like your friend probably followed their suggestion. Generally they will say between six and nine minutes. My lapsang souchong says seven minutes on it! Seven! I wouldn’t dream of it. Madness.

Yeah, they do seem very long – but so far it’s worked exceptionally well for the whites!

I got this tea in a swap with Angrboda , and, to be honest, wasn’t in any hurry to taste it. I have not had good experiences with green tea. I know that many people love them, but most of the ones I’ve had before, both flavored and unflavored, never impressed me. So I figured I was simply not the green tea kind. So this tea sat in my sample basket waiting for that day when I was feeling adventurous enough to try this in spite of my (so I thought) certainty that I would not like it.

I took it to work with me today, to make in my new heavy cast-iron teapot. I steeped with less than boiling water (it’s a water dispenser, so Ive no idea how hot it is, just that it is not boiling), with a short steep time – about 2 minutes.

This is really good! and I mean REALLY good. I assume it smells like rhubarb, although I will admit that I have never smelled rhubarb in my life, but It’s a pleasant sweet aroma. The green base is smooth and mellow with a slight (rhubarb?) sweetness to it. Not overwhelmingly fruity (a good thing), but the flavor is there.

This has actually made me think that maybe I need to give green tea a second chance.

Yay, I’m glad you enjoyed it! To be honest I was a bit uncertain about sending it as well, but eventually I decided that even if you probably didn’t care for it, it would still be an interesting one to have tried. :)

To me it’s an extremely girly tea. My synesthesia explodes with princess pink when I taste it. :)

I’m glad you did send it, as it has redeemed the green tea for me. Now I just need to fly to Denmark and stock up on all these A C Perch teas I’m starting to love :)

… I got into the kitchen and found my teachest raided.
Two used bags had been left to dry and rot on top of it – I wonder if someone is trying to piss me off intentionaly, but I think it’s just some poor absentminded parttimers who don’t know that the tea is PRIVATE.

sigh In truth I am just very upset to find that the only tea left was the green rhubarb.
It’s creamy, sweet and green – and soo very not what I need at the moment.

That’s just not okay! And expensive stuff too. O.O

Yearh, that’s what I thought!

This one is the tea that I am drinking when I’m working. Especially when I work with my creative stuff. I like this one a lot, because the taste is kind of bittersweet. At first you can taste the rhubarb which are kind of sour but sweet, after that it gets like a bittersweet after-taste. The mix between bitter and sweet makes it very interesting.

It also fits with cookies and desserts with ginger, lemon and chili. I tried it with A.C Perch Ginger cookies and the tea really emphasize the spiciness in the ginger. Try it with lemon and ginger cupcakes. Just a suggestion.