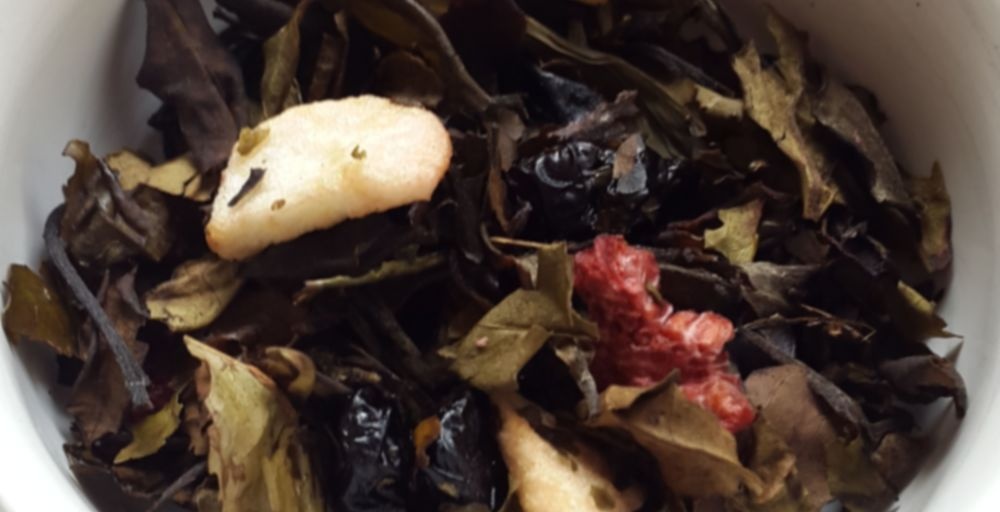 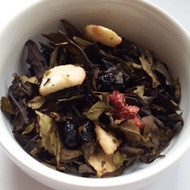 Hold on to your summer year round, with this cuppa. Combines the flavors of cherry, apple and blueberries with a hint of rum and wine to make the perfect sangria year round.

Sample from dexter thank you! i always like trying white tea blends. While not always a fan of white teas straight, as blends they often have positive results for me. This one is no exception. While i wouldn’t call this one sangria exactly…the flavours are too delicate and not quite there, it does have a memory like quality of sangria too it. A really nice pairing of flavours that i can see being VERY tasty as a cold brew in summer.

This is the last A Quarter to Tea I have to review… for now. It was included in the sampler I bought. Sadly, this isn’t my favorite, though it is being discontinued now. I think that is a good choice among the Quarter teas I’ve tried. This one just isn’t as magical as the others. Sure, I didn’t follow the suggested steeping instructions, but I think it tasted the best it could have. I was tasting mostly apple due to the big chunk of apple. And maybe some sort of champagne hints, but that could have been the white tea itself. Not really tasting the other fruits or flavors. I was expecting at least that delicious cherry flavor from the other cherry teas. Maybe the flavoring was a little faded with this one. I tried to keep it away from the other samples to reduce contamination. The rest of my sample will be on my sale list for someone else to try!
Steep #1 // 2 teaspoons for a full mug// 25 minutes after boiling // 2-3 minute steep
Steep #2 // 12 minutes after boiling // 3-4 minute steep
http://www.etsy.com/shop/AQuarterToTea

This light tea is the first cup of tea I have in the morning to start my day. I’ll admit that I’m a novice to tea tasting, so I apologize that this review might not be as helpful as others!

The way I prepare this particular tea, I wouldn’t say it’s my substitute for sangria. However, I love the light, fruity hints first thing in the morning. It’s a delicate diversion from a coffee mindset, with its heavy, punch-in-the-face, “YOU AWAKE YET” flavors.

Just ordered more samples from A Quarter to Tea! The Smoky Sweet Potato Keemun really sold me on doing so; I mean, there were several that I was really curious about but the idea of that one had me salivating – and I don’t even like Keemun! So, I should probably get my reviews up for the blends from A Quarter To Tea that I’ve already tried…

This is my second sample from A Quarter to Tea! I chose it for a couple reasons; the big one was that the other two samples I picked out were oolongs and I wanted to get to taste at least one of Lauren’s other tea types. However, I was also interested by the fairly unique ingredients. I’ve never seen Sangria with blueberry, for starters. Finally, I wanted to find a Sangria tea that was an improvement on the other two I’ve tried. DAVIDsTEA had a seasonal Sangria blend which I didn’t mind but didn’t love, and Red Leaf Tea has a Sangria flavour of matcha I currently own but don’t particularly like. And the idea of Sangria with a white base sounds awesome, too!

It was hard to form much of an impression of the tea dry: I could see several chunks of the dry ingredients in the blend, but there wasn’t a distinct aroma. Part of that, I feel, is that in the package Lauren mailed to me the Cherry Chocolate Latte was really a dominant flavour and I think possibly may have contaminated the other teas it was packaged with or, at least, “cancelled out” their aromas – which weren’t as potent/strong. Since Lauren suggests on her Etsy page to ice this and since Sangria really is a drink best consumed cold I decided to go with a cold method of preparation. However, instead of icing I went with cold brewing because that style of preparation is a favourite of mine.

I do find this tea to be very mildly/delicately flavoured overall, with softer and less prominent notes of apple and blueberry and a jammy stonefruit quality which I suppose is the cherry. I want to point out that mild and subtle isn’t actually a bad thing, however Sangria doesn’t have a ‘delicate’ flavour to begin with so it’s not reading as the most accurate flavour profile. Plus it’s a little odd for me to neither taste “orange”/citrus which is such a common Sangria flavour or the wine/rum. As such, while I really like the flavour that I do taste, I find it very hard to drink this and think of it as ‘Sangria’ flavoured. The name just doesn’t seem to match, you know?

I’d be interested to see this tea rebranded as another flavour, maybe even some kind of ‘punch’? This is a refreshing, light, fruity cuppa but in my ‘quest’ for the perfect Sangria tea my expectations just haven’t been met.

Lauren | A Quarter to Tea
Delete

Admittedly this was kind of based of an extremely usual Sangria my husband and I fell madly in love with! It was white white, rum, apple, and macerated berries. It could probably use a rebranding to that effect.

I’m working on a red wine inspired blend for later this month though, because I think a mulled wine tea would be amazing. I’ll try to work in a more traditional sangria, as well!

Thank you for reviewing :)

This is my second free sample from A Quarter to Tea.

Unfortunately there was some scent contamination as this tea in dry form just smells like currants and almonds due to the other samples I also asked for.

I used the whole sample for one cup as the pieces were so large. There were large pieces of dried apple as well as some blueberries in my sample but I do not recall any cherries.

I obviously didn’t do this tea any favours by brewing it hot. I would guess that it would be a better cold brew but I tried hot anyway. Initially hot it tasted ok. It tasted more so like dry champagne that had lost all of the carbonation with a bit of slightly bitter white tea. No fruity flavour. As it cooled there was a bit more of an apple flavour. Like a non-sweet apple cider. It still retained the flat champagne flavour. I did not get much fruit other than hints of apple but that may be due to my sample. The bitterness from the white tea faded as it cooled. There was no taste contamination despite the smell.

I would say it was definitely better as it cooled. It tasted a bit more like a mimosa with not so much citrus in it. I think it would have been better with some kind of sweetener like maybe some honey, but I didn’t have anything at work to add in. But I can definitely see where the sangria part comes in.

I did my sample cold brewed; will likely post my review tomorrow.