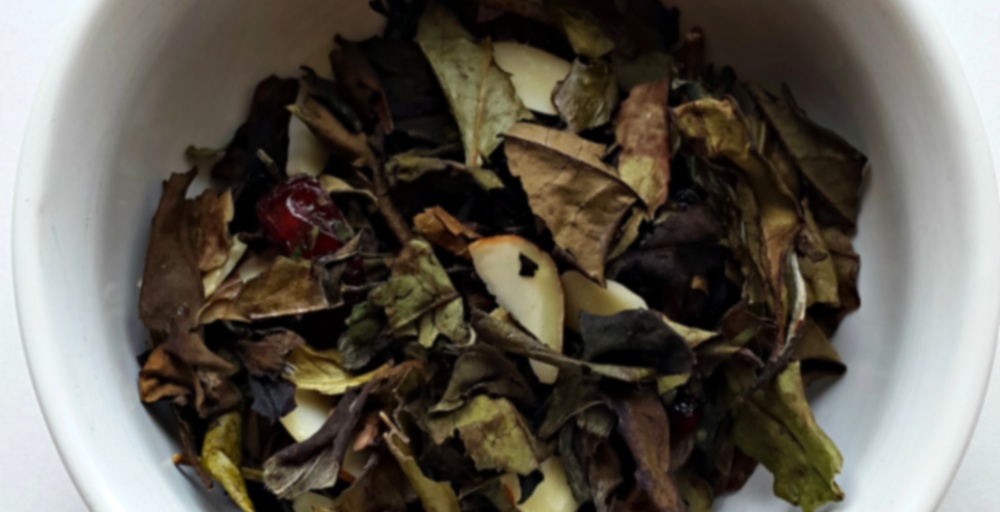 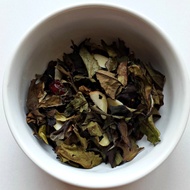 Tart cranberry and smooth almond come together on a sweet pastry background that will have you coming back for second and third cups.

This tea is limited run, so once it is gone, it’s gone for the season. It is sold only in 0.5oz quantities.

Not going out today means tending to my tea samples all day. West Edmonton Mall yesterday, on the last Saturday before Christmas, was utter madness as expected so now it’s time to balance that off with a day of hermitry.

The aroma of the steeped tea reminds me of almond cookies, specifically Voortman Almonette and Almond Krunch cookies. Soft almond that isn’t as strong as almond biscotti. I detect a hint of cranberry as well. This so seems like it’ll be up my alley.

And it basically is, however, the cranberry ends up tasting more like artificial raspberry. I know there are real dried cranberries in the blend, but I wonder if the natural flavouring in this includes something berry-ish. The artificial berry tone is fighting with the lovely almond note. The base is light and lovely, excellent pairing with berries and almonds. I don’t taste any obvious bready or baked confection notes in here but in my opinion, the almond takes care of that since it’s such a fluffy, sugary almond note.

Ultimately, I’d love this tea if it had a more genuine cranberry flavour.

Here’s to the not going out part!

First to review? I can’t believe no one else was drawn in my Cranberry Almond Scone! Back when I was picking my first three samples, this is one I was very close to asking for but instead I went for the Sangria.

I cold brewed this sample; the dry aroma was just so much more cranberry than almond and I really quite like drinking cranberry teas cold over hot normally so I thought this suited my tastes better. If the aroma had been more of an almond than cranberry I would have made it hot though. Steeped, the liquor was very, very cloudy/foggy but it was also this lovely kind of silver/moonlight colour too so while normally such a cloudy liquor would have aesthetically been a turn off I didn’t mind it here. It was honestly a little pretty.

Taste wise, the best word to describe the overall experience would be ‘intense’. It’s a good mix of sweeter almond notes and juicy, tangy cranberries. The cherry/marzipan like flavours from the almond really balance out the otherwise tart tendencies of the cranberry. I will say, it was kind of artificial tasting. I know the blend definitely had actual almonds in it (probably why the liquor was so foggy) but I was getting an artificial almond extract kind of taste as well. Artificial doesn’t necessarily mean bad/chemical but it did lessen the experience a bit for me.

The other problem I encountered was that there wasn’t really a whole lot here to nail the “scone” aspect of the tea. Had there been notes of butter, cream, or baked bread I think that could have tied it in but mostly this was just cranberry and almond. Maybe if I’d brewed this hot the balance of flavours would’ve been different and the white tea itself could have contributed some of those notes I was looking for, but this way didn’t do that for me.

Overall, I still really enjoyed this blend! It wasn’t exactly what I was expecting or looking for but I think if I was drinking it again knowing this is what it’d taste like I’d be much more satisfied ’cause the flavours that are here are quite yummy.

Lauren | A Quarter to Tea
Delete

This is actually really interesting to me! I don’t know that I’ve tried this one cold steeped. I’ve found it’s mostly a buttery cake tea with cranberry and a little almond when brewed hot!