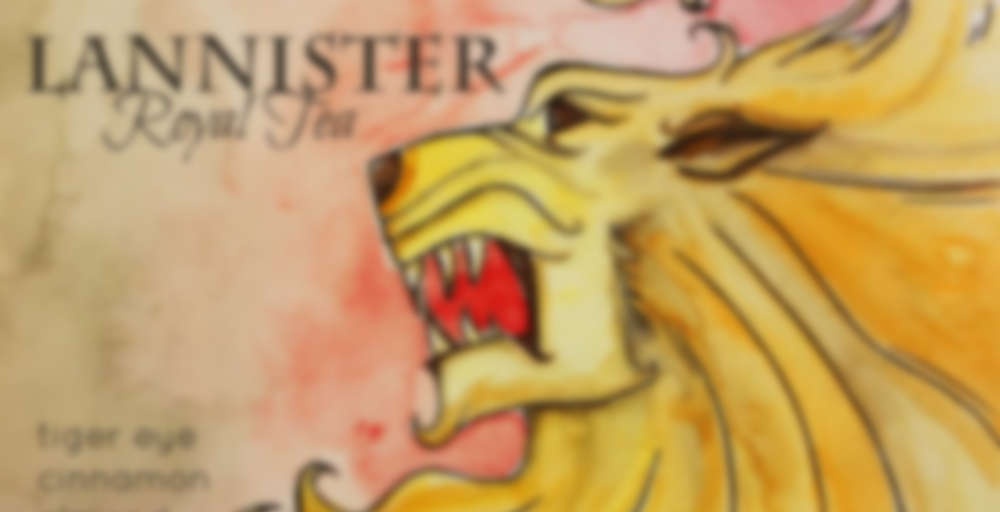 Bask in the light of your gleaming gold while you drink this rich, strong blend. Accented with fire, share how hot your loyalty is for the House of Lannister by drinking this tea fit for royalty.

My second pick from the Game of Tea (Thrones!) sampler set. This one’s a blend of Tiger Eye, Cinnamon, and Almond.

My initial thought is that I like it very much – there’s a lot of caramel and chocolate at the forefront of the sip (I guess that’s the Tiger Eye…), against a pleasingly spicy background of cinnamon and the merest hint of almond. I drank two cups over the course of the day, one with milk and one without. The cup with milk was a little more muted, and causes the almond to disappear (it wasn’t strong to begin with…), but still has a nice chocolate/cinnamon vibe. I feel like you lose some of the caramel smoothness with milk, too, so going forward I’ll probably drink it without.

My first cup – without milk – was really smooth and very easy to drink. Part of me feels it should be “redder”, or somehow brassier, if it’s to really represent the Lannister’s – maybe a touch of hibi wouldn’t have been amiss here? I was imagining something a bit more like Butiki’s Ruby Pie, but obviously this is quite different! This probably isn’t the most unique tea out there, but the cinnamon adds a little twist and it’s nicely indulgent and desserty. I’ll happily drink up the rest of my sample.

I would expect a Lannister tea to be brisk, maybe an Earl Grey?

Cinnamon seems like it would make more sense for a Targaryen.

Not much to it