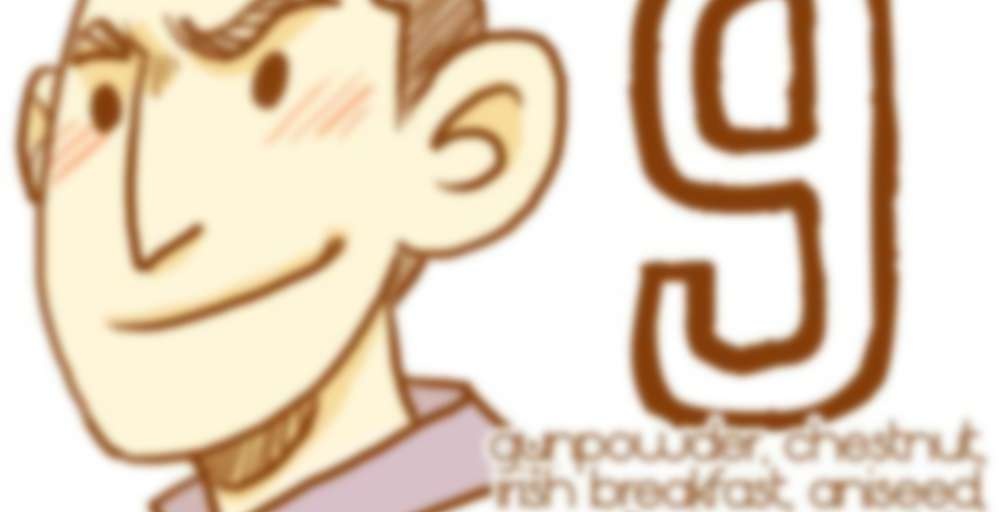 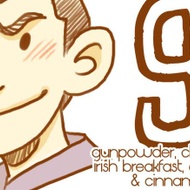 A bit darker, more intense brew than the others, but still with a surprising amount of sweetness, considering the contents.

Inspired by characters from BBC’s Doctor Who. Created for my own enjoyment.

Slider bar with numbers is a good time :) well except for not liking iPad lol

Oh damn, all of my traveling I do with an iPad and I’m frequently drinking tea…

I didn,t have any problems using the ipad except for that darn slider bar!!! Just when I thought it was finally possible to rate with the number I wanted, lol! Well I will continue to try to get as close as possible cause I won’t be using the PC just for that…that’s for sure!

having trouble hitting the hearts to like things on the ipad and there are just too many slider bars now for ipad land.

Yeah, slider is painful to use on my android. I’ll just go back and add them later via desktop.

Best tea I’ve had in a while! The taste reminds me of pancakes with butter and maple syrup for some reason. It’s sweet and nutty and earthy. I enjoyed it plain, but even more with sugar and milk.

i’ve been considering this tea for a while (cuz 9 is my doctor), but your short review and mention of pancakes has convinced me. sweet and earthy sounds perfect. yay!

A robust blend of green and black tea, this tea will keep your kicking while warming you up. Although I expected more chestnut and anise, the first taste as a bit astringent without modification. It’s bold, like a stout. With a dash of milk and sweetener though, this loud and strong tea becomes a full-bodied, thick, and caramel consistency that lingers pleasantly on the tongue.

Continuing through my sampler of Dr Who fandom teas, the next from the box is Nine! Nine is one of those green/black blends that I’m always a little scared of. I never know whether to use water to suit the green, the black, or somewhere in between. I threw caution to the wind for my first couple of cups, and used boiling water, 1 tsp of leaf, and a 2.5 minute brew time. No additions. The resulting liquor is a medium golden-brown.

As flavoured blends go, this is one of the more intriguing ones I’ve tried. It contains quite a lot of flavours I probably wouldn’t have put together – chestnut, aniseed and cinnamon, on a base of irish breakfast and gunpowder. The resulting flavour is quite complex – I get the aniseed fairly prominently, followed by the rich roastiness of the chestnut, rounded off with the mild spice of the cinnamon. It makes me think of Christmas in some small way! The base is smooth and clean-tasting – irish breakfast was a good choice here, and there’s just the slightest hint of dank, vegetal green.

I’m a bit stumped on the fandom aspect again with this one, but it’s certainly a tasty, unusual tea. The flavours work together a lot better that I ever would have expected, and this is one I’d consider repurchasing if I buy from Adagio in the future.

Sipdown! 982. Thank you Sil! (I think there were a few teas accidentally missed in the count previously. And I need to add a Verdant and Butiki order. Plus the incoming 52teas’ Christmas sets. Crap crap crap.)

I took the time to look up all the teas I was steeping to check if any of them needed different parameters…. and then proceeded to steep the only one with green, with boiling water. Sigh. It doesn’t seem to be ruined though, but there is some bitterness and astringency, which I would definitely chalk up to user error. Anyhow! This is one of a few deliciously aromatic mugs I brewed up tonight, from the Doctor Who custom blends by Cara McGee. I genuinely have no idea what any of them are, so I get to play a little guessing game!! This one smells caramelly, with a hint of cinnamon or spice, but JUST a hint. The flavour is more or less the same, being thick and somewhat sweet/caramelly, fairly malty, a little bit spicy, and kind of astringent, which definitely impacts my tasting of the base teas. I assume, though, it’s Adagio’s standard black (and some sort of rolled green; I’d maybe guess gunpowder but I’m not detecting smoke). Despite the overly hot water, and 45 seconds longer infusion time than I intended, this is pretty good. I’d guess it’s a caramel spice tea (emphasis on caramel, not spice), but it appears to be chestnut and irish breakfast (with gunpowder?) Quite an interesting combination, but it does actually work. The chestnut must account for the sweetness, and the spice is perhaps an artefact of sample contamination or my imagination (I do have a Laoshan Chai a couple teas down the line).

Anyhow, I’m pretty impressed with this blend, and it makes me quite curious to try Adagio’s chestnut tea, if they have one available, because that caramelliness is gooooood. Thanks again Sil!

New Doctor Who tonight!!! Celebrating by drinking DW teas today. I feel guilty not drinking tea from my TTB but, come on…. Doctor Who!

I think I am over leafing this tea a little bit. In looking at the directions on this page I see that they list 11 oz. which is pretty odd. It’s still good and chestnut-y but somewhat astringent. No one else mentioned astringency, so I think it’s me.

Only four more hours! Is there a Twelve blend yet?

I know what you mean, Twelve. What will it be like?

I actually really enjoyed this…. I’ve never eaten a chestnut before in my life but judging by this tea, which was really nutty and toasty and comforting and I’d probably enjoy them.

I didn’t even get the typical Adagio bitterness!

Thanks for sharing, Sil!

Soooo I got 2 samplers from Adagio before they pared down to 6 tins and I figure I’d better at least start trying them. Lol. So today I decided on the Doctor Who one, mainly because I’ve technically tried most of the teas in the ‘Tales & Tea Leaves’ set, so these are all new to me.
Nine is my fav doctor so it was only fitting that I tried his tea first.
Dry this had a sweet, roasty sort of smell, but nothing else really stood out to me.
Brewed I can kinda smell the anise, but again, it’s kinda just there. I ended up brewing it way below the recommended temp of boiling since I’ve found that most Adagio blacks turn almost undrinkable when steeped at boiling. And this one had gunpowder, which I didn’t want to burn either. So I gave this a shot a 195* because why not? XD
Everything kinda comes out in the taste. I get anise pretty strongly right off the bat. It reminds me of the sassafras that I get at the RenFaire, which is actually a shame because I don’t actually care for sassafras. Lol! I get a bitter note, but I’m kinda used to that because it happens so often with Adagio black tea blends. And I’m getting a light smokyness from the gunpowder. It’s also middling on the astringency scale. Not bad enough to make me want to pour the cup out, but enough there so I notice.
After adding some truvia, it didn’t get sweet persay, but the anise toned way down and let other flavors come up. I’m not sure if this is one I’d order a large amount of, but I’ll definitely finish the tin worth eventually.

Okay so this was technically a sipdown aaaages ago, and I never wrote up a proper note on it because I just love it so much I drank down my entire 0.8oz tin and then my 2oz pouch without stopping long enough to think about it. I am so glad this tea is still available, and as soon as I’m done with my no-buy I will 100% be buying another big bag.

Well, I surely would have enjoyed this tea if I’d noticed that our milk had turned BEFORE pouring a bit of it into my mug. It’s meant to be good until tomorrow! Oh well. It still smells like a delicious tea, and I’ve got just a little left of my sample from the lovely Sil to save for a tiny cup on a rainy day. No sense crying over curdled milk.

Tomorrow I make the trek back up to Mancunia to FINALLY hand the keys over at my old place and it sure would be nice if eventually I got my deposit back, considering. Looking forward to a nostalgic meander about the city centre and probably having dinner at Wagamama and retiring to the Ramada where Gentleman and I first established our romantic intentions to one another. Ok, and finally stopping in at this tea place in the Northern Quarter that has a blend I’ve been eyeing for the better part of a year, heh. Of course. I mean, we’ve also established that the only specific places we definitely need to visit when we take a weekend in Paris are tea shops. nods

I have established a similar travel plan for whenever it is I go to NYC. Boyfriend does not know this yet. Muahahaha…

Cameron, this gives me ideas. Boyfriend is going to NYC with his family in July…I wonder if I can convince him to make some purchases while he’s there? Plots and schemes

Do it. DO IT. It’s the best idea. One would be remiss not to take advantage of foreign tea shopping!