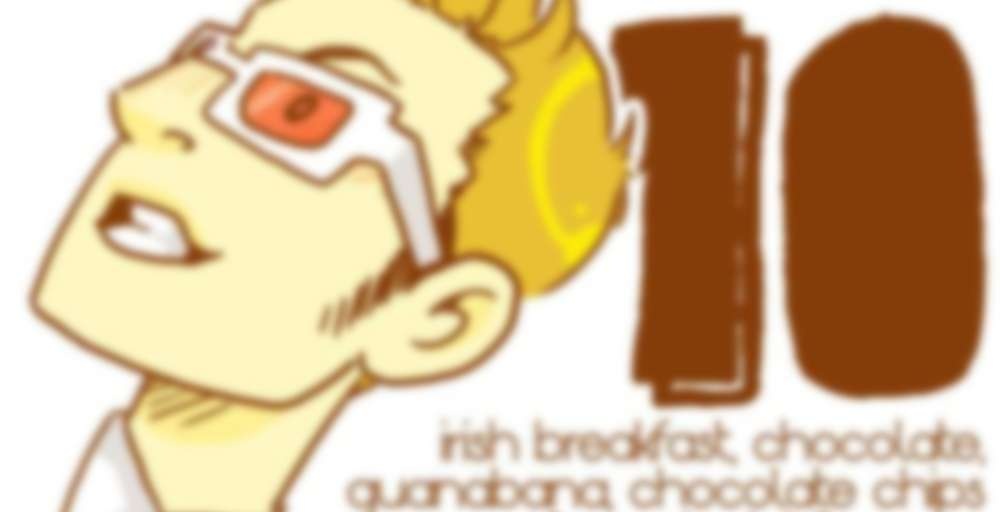 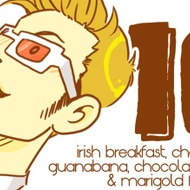 A rich, sweet, and bright blend, full of quirks (and just a touch bananas). A tea you’ll find yourself constantly reaching for.

Inspired by characters from BBC’s Doctor Who. Created for my own enjoyment.

Steeping Instructions: Steep at 212° for 3 minutes

Sadly…ten is a disappointment. It pretty much tastes like an average cup of black tea with maybe an echo of banana/chocolate. There’s not much there though, and it’s hard to tell that this is supposed to be a flavoured blend. sigh… how very disappointing. I love 10…but i don’t love this tea.

The irish breakfast in this comes out STRONG, with a nice kick of chocolate flavor. The guanabana flavor might as well not be there because I am not picking it up at all. I guess it might help if I knew what guanabana tastes like, but this is the first time I’ve even heard of it. I’m a l m o s t tasting a citrus flavor?

Now, as for this reflecting our beloved 10th Doctor, I’m not sure. The color reminds me of his suit/coat, and I know that chocolate should definitely be in there…There is something very comforting about it as well. But I almost want something a little more quirky to give this tea some sass. I guess guanabana is quirky because who even knows what that is? But taste wise, it’s not making me go “WOOOOAH THAT’S 10!” It’s more like “yeeah ok that’s passing for 10”. But yeah, it does taste good.

What the heck is guanabana?? I’m drinking through my Doctor Who fandom sampler (the original 10 tin one with guanabana Ten and sweet potato Rory) as I’m going through the show again, and it just occurred to me that I don’t even know what this one is supposed to taste like. A quick google tells me that “the flavour of the fruit has been described as a combination of strawberry and pineapple, with sour citrus flavour notes contrasting with an underlying creamy flavour reminiscent of coconut or banana” so that really narrows it down! I do get the sour citrus notes, and maybe some strawberry and banana, but no coconut or pineapple is really anywhere to be found. I’m sort of glad, because as it is I think it represents Ten pretty well. The malty Irish Breakfast is strong and dominates, which I often find with Adagio blends, but it isn’t unpleasant. Too astringent to drink without milk as per usual, but again that doesn’t really bother me since I drink black tea with milk 90% of the time anyway. The chocolate note stands out way more than the guanabana, and it’s not particularly authentic but I’ve also had way worse chocolate teas. It smells divinely chocolatey, and I think the scent might help suggest the flavour is present slightly more than it is. Malty-chocolatey-strawberry-banana oddness, but with milk and one sugar a nice non-committal cup to sip on while I’m winding down for the night. Nine will always be my doctor, both in the show and in tea form, but I do hold a special place in my heart for Ten.

I was feeling something chocolatey today and picked this one up. It doesn’t seem to taste terribly bad oversteeped (oopsies) but this has also never been one of my favorites.
The chocolate is more present than I remember in the past, but I also taste a faint smell of bananas and I know this is an Irish Breakfast base but it really reminds me of pu’erh – possibly the mix of chocolate and Irish Breakfast is similar to my puerh experiences?

Also at work with me today, the wonderful Ten! Ten is a chocolate blend on a base of irish breakfast, and it’s probably the most chocolatey tea I’ve tried in a good long time. I used 1 tsp of leaf for my cup, and gave it 3 minutes in boiling water. No additions. The resulting liquor is a medium golden-brown. The dry leaf looks fairly ordinary – relatively short black tea leaves, a scattering of chocolate chips and marigold petals, and a few cocoa shells. The scent is out-of-this-world chocolatey, though, and that’s what gave me hope for this one!

Fortunately, it lives up to its promise. The chocolate flavouring is smooth and rich, almost like melted dark and milk chocolate mixed together and poured into a cup, only thinner. The black tea base adds a lovely malty sweetness that really works well with the chocolate, and which helps to stop it becoming too cloying. This is a really wonderful chocolate tea, and it’s not often that I say that. It’s the goldilocks of chocolate teas for me – just right!

Another thanks to Sil for a sample! And again, I get to play the “what’s in this tea?” guessing game! This one is a lot less aromatic than “Nine”, but there’s still a little something peeking out that’s not quite straight tea. I’m tempted to say caramel, or perhaps even chestnut, again, but that’s not too likely. Other than that, though, it just tastes like black tea. A little mouth-drying (so a bit astringent), but not too bad, and that’s probably a result of again, the extra 45 seconds it got due to inattention (I try to be very strict with blacks).

Seeing that this is supposed to be a chocolate banana tea…. comes as a surprise. Maybe that caramelly flavour is actually chocolate. Or banana. It’s impossible to tell, really, because it doesn’t taste overly like either. I see that Sil also found it relatively flavourless, so maybe this was just a poorly flavoured or old batch. Or, maybe Adagio isn’t great at banana or chocolate flavouring. Either way, I’d happily try this out again, since as a plain black tea it’s certainly not objectionable, but not by means of purchasing it myself (whereas some of the other blends…. yes.)

First it should be noted that this is a review of the original blend with the guanabana (which Adagio has since discontinued due to unpopularity), from the 10 tin sampler set (which Adagio has also since discontinued….for I believe cost issues). XD
So another one from my sampler. I’m almost all the way through, with this one being one of four left. Technically I have three since I’ve already had the Jack Harkness blend before, but the blend in the tins smells so differently than the blend I had gotten then (Not as in-your-face almond) that I’m planning on giving it another try. I also think I’ve forgotten to review most of the other tin blends since, like I said, I’m almost through with the sampler but there’s only reviews for 4 of them. Lol! I’ll have to go back and retaste the blends then review them since my memory is kinda foggy on them. But I digress. Onto the tea.
It’s got a funky sort of fruity smell in the package that actually kinda reminds me of Ten’s quirkiness on the show. There’s also little chocolate chips mixed into the blend, but ultimately I think this added nothing to the brew aside from looking tempting in the dry mix.
Taste wise it’s a kinda funky banana/fruity taste to it with a strong base of basic sort of black tea taste. Not funky bad, but funky in that it’s banana but with a little something extra that’s hard to put my finger on. This was without sugar. With a bit of Truvia (a little more than I’m used to using, but still less than a tsp, the blend pops a bit more with fruitiness and gets pretty damn tasty. Lol! I definitely prefer it with added sweetness than without. It’s kinda just blah straight.
I’m not sure what the current blend is like, but I imagine that it’s totally different from this version, and possibly not in a positive way. The guanabana adds that extra little quirk to what would possibly be a normal, boring sort of blend. Not at all appropriate to Ten’s character. Lol! Maybe I’ll try to swap for the current blend mix to compare. I’ll be drinking the rest of what’s in the tin, but I don’t expect an order due to the change in the blend.

I like Eleven, I LOVE Ten. Yes, that’s accurate for both teas and doctors. Sipdown! Thanks again Sarah!

Thank you Sil for sharing this interesting sounding blend. Unfortunately, “interesting” is not a word I would use to describe the flavor. Instead I would probably use a word like “mundane” because this is like a run-of-the-mill black tea with just a bit of chocolate flavoring (fake chocolate, not the good stuff). Nonetheless, I am really glad I got to try it as this is another blend I can mark off my list.

Sorry Ten! I wish your tea was more memorable! It just tastes like a plain black tea with a little tiny bit of banana.

I’m happy Sil sent some over for me. I would have been disappointed if I’d just bought 3 oz of it!

Oh no! There seems to be so many flavorful ingredients though. How can this be?!

I’m thoroughly confused by this tea too, as I’ve got a blend with fairly similar ingredients and it’s chock full o’ deliciousness. Must be the proportions in which they’re blended. Poop.

That being said, Adagio’s discontinued the guanabana tea, so who knows? Maybe the creator will reformulate and come out with a tastier replacement. A fandork can dream.

Hmmm. Maybe it’s the guanabana? It just seems to mild for a Doctor that is decidedly not.