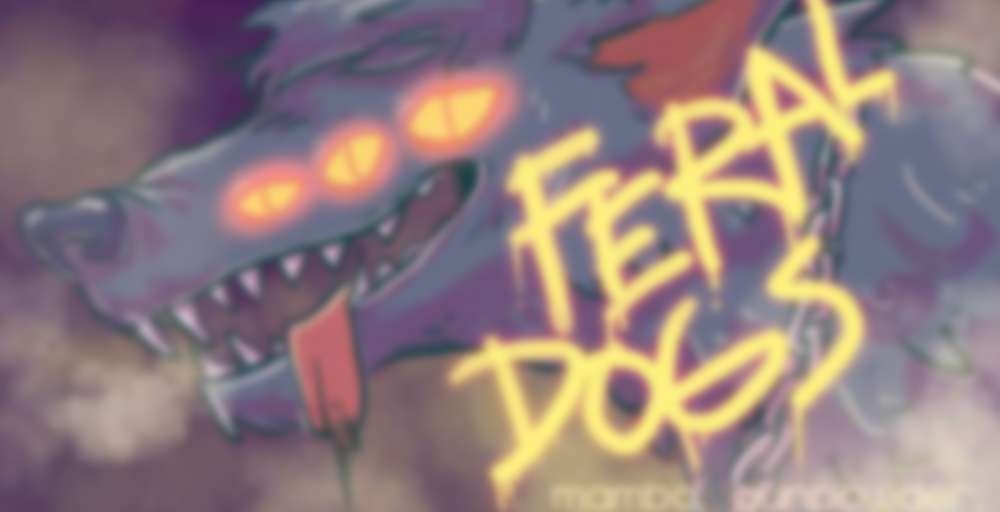 Not actually tea. Just some plastic bags caught in the breeze.

So I’ve had these for a week or so and haven’t tried ANY of my Night Vale sampler. I think I’m worried I’ll fall in love with all of them and want to buy 3 oz of each! /0\

That’s a pretty ridiculous worry though!

I chose thise one as I’d already boiled the water and most of the teas in this pack have a rec’d temperature that is lower. I basically had 3 choices. :P

This one is dark and slightly smokey and spicy with the cinnamon. I thought it was puerh actually. It makes me think of damp earth and hellhounds giving chase during a storm. It’s not a bad start to the set, but this is probably NOT one I’d need to repurchase.

I love the tin though.

What do you guys do with your Adagio tins?

Aaaaaah we order the Nightvale sampler and the Scott Pilgrim sampler and we are itching to get our hands on them.

As for the tins, you can use them to keep little things in your purse, or refill them with teas you want to sip down so you’re more likely to reach for them. Use them to hold little crafting supplies…heck you could use them as spice jars, even!

Hmmmm… those are all very good ideas…
I like the Shadow box displays Adagio sells but wouldn’t want to pay ship that.

I hope your samplers come in soon! I was so impatient waiting for mine. :)

Yay for first Nightvale tea tasting!
The shadowbox displays are neat but waaaaaaay overpriced for the amount of tea you’re getting. The tins look like the small tin of Konami blend I got in my last order (not the tin size I sent you Cavo, this was like less that half that size) and there’s maybe 2-3tsp of tea in them, maybe 4 depending on the blend, probly closer to 2 if the tea is fluffy inside. So aside from getting a nifty looking bit of wall art (which I guess is the main reason for buying something like that) you’re better off buying a sampler for the same price. More tea and you still are getting pretty artsy tins. Lol.

I just need to figure out how to build a shadowbox for the tins I already have! I can’t just keep them on my shelf forever, (y’know, after I eventually try empty them all)!

i started today having this blend because i saw Cavo’s note first thing yesterday and also it has safflower accents in it. safflower is not very common in the adagio blends overall. but i like the way it looks and i’d like to use it in my own blends. so i wanna try to get to know it better.
(safflower is also an accent in the ’sherlock’s experiment’ blend.)

so i prepped a good amount of leaf to brew 24oz worth of tea.
i poured the water …. and then forgot about it. woops!
it happens.
(it probably brewed for about 5 – 8 min? idk. i’m a susceptible victim to time gremlins. so i’ll ask one of them how long forgotten tea brews, if i ever catch one.)

but the over-steep didn’t completely demolish the cup!

in fact, i think the long steep really just brought the cinnamon out a lot more.
Shadowfall and Cavocorax both described the tea very accurately.
damp and earthen and mossy and cinnamony.
i do like the cup.
it would be a tea for the days when i’m feeling equal parts brave & sullen.

idk what the safflower does.
i think it’s just there to look pretty. totally fine by me.

Tea #4
This is such a pretty blend in the package with the little sprigs of red mixed into the rest of the tea. Maybe I’m strange but that was my first thought when I opened the tin. Lol.
The dry tea itself doesn’t have much of any particular outstanding smell. It just smells like, well, tea. Lol!
Brewed it’s vaguely cinnamony, a bit roasted with a pecular wet sort of smell to it. Not like musky wet dog smell, but just sort of damp. I know that probly doesn’t make any sense to anyone else, but when I figure out something better, I’ll fix it.
The taste is kinda meh for me with nothing standing out except some cinnamon notes, something kinda smokey and another taste that I can’t identify. Maybe it’s the ‘mineral’ taste that the Mambo is supposed to add, I’m not sure. I’ll have to just make some Mambo (I had picked up a sample pack with my order) and see if that’s what it is.

I’m not sure I could try this one because of the name.. Weird.

I should finish the Welcome to Nightvale podcasts… I think I only finished up to the third?

Yikes! I just realized you were rating these so low! I hope you find a few that make the path worthwhile!

Not sure if I oversteeped this or used too much, or it’s just that these dogs are really feral but it is a bit overpowering/bitey. Would still recommend, just go easy on the tea:water ratio

Cavocorax Spoiled me with samples of her custom adagio blends which makes me super happy. Not because i think that i’ll love any of them but because i love trying ALL the teas, and maybe some of them will be nice enough. :) I had this one very early and so long ago. What i remember is that this was sort of an average cup of tea with some cinnamon. I’m trying hard not to look at the ingredients beyond black/green/rooibos tea so that i can really see what flavours i taste when i drink them :)

I have faith in you Sil, if someone on this earth can try “all the teas” I’m pretty sure it’s you :-)

on the plus side.. my tea drinking is so totally getting interrupted right now with MOAR stupid work problems (5th one today….) but this is keeping me laughing

I’m clearing fic from other fandoms off my kindle, so reading some Bilbo/Thorin, Cecil/Carlos, and even Dean/Castiel, going way back (but not waaaaaaay back – though I’m sure I have a Batman/Robin on there somewhere). I figure Night Vale tea is appropriate, and I am 3 episodes behind, so.

I’m still looking for the elusive, good, lovechild!Frodo fic… Does it exist??? I swore I saw it once on AO3.

Ooooooh! oOoooooooh!
Thank you.
Also, The last two episodes were better than usual in my opinion so you are in for a treat.

Sweet! I was excited when I heard the latest episode was going to mention the cat, and also was called “Cookies” – Who doesn’t love cats and cookies?!??

Yay my wife is home so now I don’t have to make my own teas!

“Regret nothing. Until it is too late. Then, regret everything”

Am I going to regret you, Feral Dogs? I hope not…

This smells oddly of Cecil, which my wife is having. So much so that I had to ask her if I had gotten the right cup, but she assures me this is Feral Dogs. Or perhaps it’s just a plastic bag caught in the breeze. One thing I do know is that it is not mostly mutts, possibly pit bull mixes, and their leader is not three-headed and wearing a great many “service medals and chevrons.”

Seriously, no one let me do fandom reviews ever again.

I see where the other reviewers get a damp flavor, it’s definitely musty in a good way. Earthy. Damp may not be a normal flavor, but what about Night Vale is normal, really?

I love the cinnamon. Love love love it. It’s cinnamon with a sweet undertone. More like a feral puppy.

However, I just bought a ton of Cinnamon Crackle, so while this is a good tea, it’s not one I feel the need to restock.

Yikes, any damp flavours are not welcome in my tea. Or perfume.