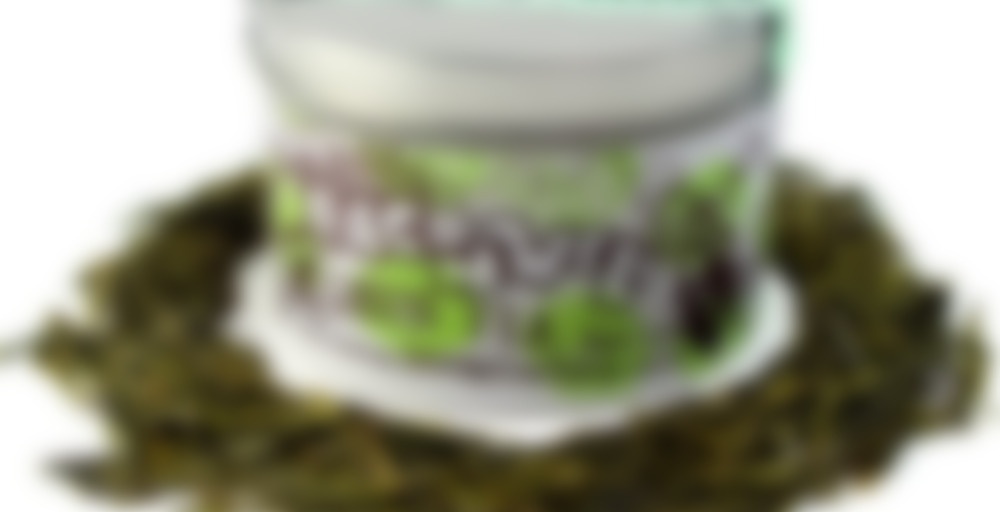 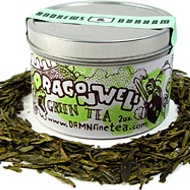 You arrive at the edge of a glade, in the shadow of a tall forest, and the path you have followed twists out of sight into the ancient woods. The quick breath of your steed reveals that he too has detected the malice that surely awaits you. With one hand on the reins, the other gripping the worn leather of your sword handle, you pass the first line of trees. Almost at once you become aware of a stone wall, ornately carved, nearly covered in vines that parallels your path. There is no wind, but your nostrils are greeted with the smell of decay, ageless and cloying. Soon, however, it is replaced by something unexpected — yes, I sense it too — chocolate, followed by buttered corn and peas. Mom must be home! And she’s making dinner!

For a satisfying experience, brew this Chinese green tea using water at about 160 degrees. You can get there one of two ways: heat your water to a boil and let it sit for a couple minutes before you pour it over your leaves, or just heat it until it starts to steam. The choice is yours. Be careful not to steep it for more than 2 and a half minutes. Hang onto the leaves as this tea is great for a second or even third infusion — we usually double the steeping time with each additional round.

Andrews & Dunham knows that nothing beats a perfect cup of tea, and a great tea needs no explanation. We love the romance of tea. We love that tea might just be the healthiest thing you’ll ever drink. But if the tea you’re drinking doesn’t taste fantastic, you’re missing out. Only a few teas meet our mysterious, rigorous standards and we’re proud to offer them to you. We’re always looking for that perfect cup, so you don’t have to.

I went with the 6oz cup method again, instead of an 8oz+ mug. I have a feeling this size will be becoming my default when drinking teas that get more than 2 steeps. I know it’s not that much less tea than a mug, but somehow I drink it faster and it feels like less tea. This time I used a 2 minutes 30 seconds multiplier like A&D recommends. I kept the 160° F water temperature like last time.

The Dragonwell was much the same as before, which is tasty and enjoyable. I sped through my first two cups, then drank the next two cups after dinner. The 4th steep was at least half tea, half watery, if not mostly watery. I do not think I will be steeping this a 4th time again.

Next time I drink this, I plan to try 3 steeps using the same times as a today but with 170° F water. Yes, I feel like each new tea is an experiment in how preparing it differently could change the taste. Yes, I am a scientist. Yes, I’m geeky. =)

Good and useful! The former sciences major in me agrees with your methods.

lol I know. I drink a new tea and for the first half dozen times, I’m drinking it and thinking about what I want to try next time I steep it.

So the whole toss in a cup and pour some water over it thing worked out really well for the Dragon Balls yesterday, I thought I’d give it a shot with this one. It was quite yummy, bringing to mind steamed green veggies, maybe asparagus or Swiss chard (♥), but man, a lot of these leaves float! I ate a few (slightly bitter (like turnips) but not bad) and eventually most of them decided to go hang out at the bottom, but ultimately I think I prefer my tea with fewer obstacles.

I’m still giggling about Dragon Balls. And picturing angry anime characters lobbing tea at one another and shouting as they duel. :)

Hah, perfect! That image is another reason Adagio should change the name!

Eh, I dunno…there’s a manga and anime series about competitive bread-baking. There’s a manga about curling. I could totally see someone coming up with a manga and/or anime idea involving tea battles! XD

I was a little worried that this tea would be too strong since it warns against steeping for longer than 2.5 minutes, but I was pleasantly surprised by a nice cup of green tea with a balanced flavor that isn’t overly grassy and has a hint of minerality.

I can’t wait to try this tea when my Series 1 set arrives. Did you just get your’s in?

Sure did! I was stoked when they did the re-release, so I jumped on the chance to finally order the teas I missed the first time around.

Wow, that was quick-shipping then!

Hah! I reckon we saw the twitter announcement at the same time. I waited until I’d put my order in before posting to Steepster because I’d have kicked myself in the face if I missed this.

There are small light green-stained fuzz balls in the tin… I just noticed it today. Strange but I still drank my steep anyway.

You know, maybe I should revise the score I gave this tea way back. I tend to compare all dragonwell teas to that wonderful one I regularly get from Specifically Tea and I’ve had the opportunity to try them side by side and I found that this tea was a bit lacking. Not a lot lacking mind you – it’s a good-quality tea in its own right. But I noticed that it didn’t have the same fullness of flavour and doesn’t resteep all that well. It’s also lacking that hint of smokiness I get from the Specifically Tea Dragonwell, but that’s more of personal preference, I think.

It’s taken me forever plus three days to get around to logging these suckers. I’d sat down to do it one day and then realized that it’d been too long since I actually drank them and wanted to wait until I tried them again before logging them.

Now that that incredibly boring explanation is out of the way, on to the tea.

This Dragonwell rates a solid second on my Dragonwell scale. It’s not a light, dancing, happy sweetness like that darned Dragonwell Spring that Carolyn sent me. It does, however, have some sweetness to it.

The first thing that struck me is that this tea brewed up into a very light yellow color. I don’t know why I made a note of this, but it was very, very light. I’ve had a lot of teas that have been brewing up near colorless lately, but it’s still novel enough for me t notice it when it happens.

Also, the leaves, and this is gonna sound kinda crazy, smelled like turkey when I sniffed them from up above. It took me a while to place it, but when I realized it I said aloud, “Holy poop, turkey!” [Except “poop” was replaced with its four-lettered cousin.] Curious, I sniffed them again closer, through the infuser, and they smelled like green beans – specifically the canned variety.

It had been long enough since I’d tried this that I couldn’t remember exactly what to expect from this [secretly, I’m using these tea logs to replace my BRAIN]. The biggest taste that I got from it was, perhaps not surprisingly, green beans. Fresher green beans than what it smelled like, but green beans. A little salty, more sweet, though. And maybe with just a hint of smoke.

I’m going to try bringing the temperature down to 160 and see what that does for it. I’ll be able to compare better now that I have it in my brain.

Turkey? Wow. Not near as fun as Jackee’s caramel but I"m going to have to have this soon to see if I can find turkey (though honestly, I hope I don’t).

Wow at the turkey flavor. It’s okay, cause I smelled cilantro in my Strawberry Chocolate rooibos from RoT. This sounds like a pretty good Dragonwell! The one I sent you is pretty sad.

HAHAHA, I couldn’t taste turkey, just smelled it. I think this would have been really weird if I had tasted turkey. Though I guess no weirder than this.
http://bit.ly/6UcWDP

I now need to go smell my Dragonwell for turkey scent and taste it for green bean taste.

I honestly don’t know where it came from. I keep waiting for me to realize that it was some immensely stupid mistake on my part. Like that someone was cooking turkey that day. I’m gonna have to make this again soon and see if I can get a repeat performance.

This was another sample from Ricky. Thanks Ricky!
As we know, I LOVE dragonwell. So I am going to be harsh, because my standards are pretty high. This tea was a little too weak for me brewed according to instructions. I brewed 3 minutes, hot, no additives. I found that the water was the right color and everything, the smell was a faint vegetal, as it should be, but the flavor just was not there.

I have also mentioned in my ramblings about green tea, that I also tend to simply add green, specifically dragonwell to a cup with hot water and drink it without ever straining. Allowing for maximum flavor (and sometimes bitterness) to come out of the leaves. In the case of the Damn Fine Dragonwell, I have to say that leaving the leaves submerged in the cup while enjoying was the best way. I feel we could have also brewed the tea longer than required, but this gives you a few good steeps, without getting bitter so there was no reason to have to make it in a pot and pour it off.

Overall, the tea was alright as long as you let it sit and infuse long enough, however the recommended time was not enough to get decent flavor out of the tea.

It’s been a while since I cracked open this tin. I wanted to get my darjeeling sample from adagio out of the way, and then I fell in love all over again with the DFT’s Nepal, and I overlooked this stuff for a while. It’s great as always though, as if I never left it.

This is a really pleasant, staple green tea!

this tea is absolutely delicious. it has been my favorite out of all 5 of the tea’s Andrews & Dunham has released. However, I no longer have any of this tea left and I missed the re-release in December of their series one! I really wish I knew where it came from so I could hop on a plane and buy it! :)