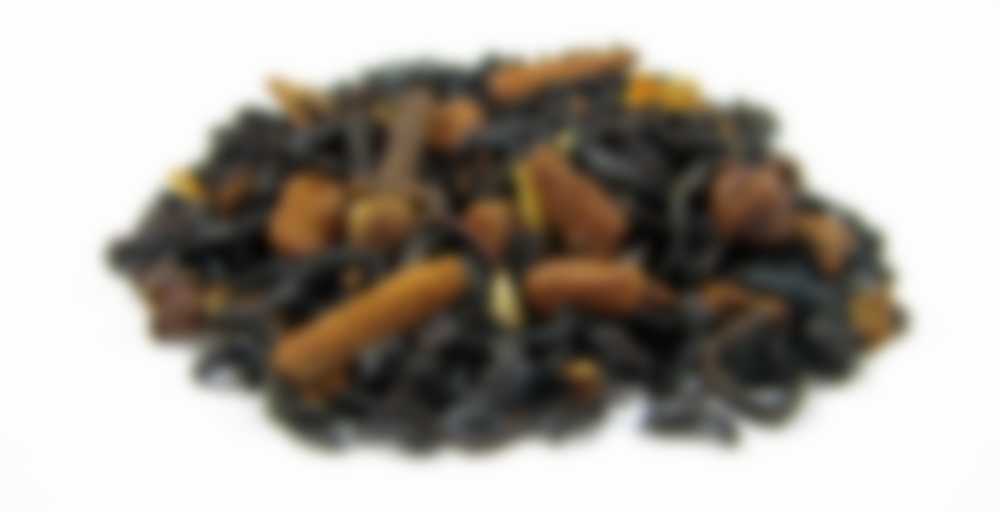 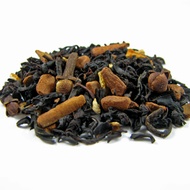 Remember about a week ago I mentioned a little project I was working on, cataloging all the teas of the world. I foolishly thought I would be finished by now, but thirty pages later and I am still finding little nuggets of information to add…and I am loving every minute of it! I love when a new subject comes up for me to obsessively research, learning new things is my passion and when it pertains to one of my other passions than the results are even sweeter.

Today’s tea is a spicy kick and possibly a little sweet if the name Hot Sweet Cinnamon by Art of Tea is to be believed. It is a blend of (all organic) Black tea, Cinnamon bits, Orange Peel, Cloves, and Natural flavors, it is a tea that I usually label as a pomander or potpourri tea because the aroma (and ingredients) were always used in pomanders and potpourri around my house growing up. The aroma is very spicy, lots of cinnamon and clove and a hint of rum or liqueur just sneaking in.

The brewed leaves are very spicy and loaded with cinnamon, it smells like Christmas and a hint of a typical ‘black tea’ aroma at the end. I can detect a very mild hint of oranges, but it is barely there hiding behind the muscled arms of the cinnamon and cloves. Think of the oranges as a wilting ingenue and the spices are her buff body guards. The liquid without its leaves is fairly sweet and cinnamon and immediately reminds me of Red Hots, those obnoxiously addictive candies that I have eaten far too many of in my life.

The taste is surprisingly bitter, though not in a way you would usually expect in a black tea (which is good because it would mean I failed at brewing it correctly) it is the bitterness of too much spice. I find my mouth going numb and my stomach growing annoyed almost immediately. Turns out there can be a thing as too much spice, tragic as that sounds. The taste after the initial clove kick in the face (at least I didn’t feel it) is fairly sweet and cinnamony, again a lot like Red Hots. The base Black tea is pretty weak, I barely tasted it around the spices. It was not my cup of tea, sadly.

For blog and photos: http://ramblingbutterflythoughts.blogspot.com/2014/02/art-of-tea-hot-sweet-cinnamon-tea-review.html

Uh oh, I think I have some of this but haven’t tasted it yet.

Oh no! Maybe you will be lucky and like it more than I did…I hope!

Another Momo box tea. This tasted exactly like cinnamon gum! The artificialness of it kind of just turned me off from this even though I kind of like cinnamon gum. I couldn’t really get into it. I swear there was a little of the dreaded soy lethicin in there too. I think it upset my stomach a bit. Yarg! Oh well! My mother liked this tea and my sister wants to try it, so the rest of the leaf I have will not go to waste.

So this is very exciting.

After checking carefully, eliminating a duplicate, and determining that I had sipped down something that I thought I still had, I now have exactly two more black teas in my cupboard that I haven’t tasted and written notes about, not including this one.

So tomorrow will be the day! I’ll have completed herbals and fruit blends and black teas. I think next up is likely to be green tea given that I have a ton of oolongs and even more samples.

Other green teas to go: 8

So I won’t make it this long weekend, and the next couple of weekends I’ll be on a business trip. But if I get all the tasting in as planned I’ll be very close to having tasted all the greens and matchas and written notes about them, too.

I discovered a couple of white teas still in my stash while doing this exercise, so I can’t claim victory there yet, and the oolongs and pu-erhs will take a while. But progress is good.

Now. This tea. The smell in the tin is candy-sweet cinnamon, in the same vein as the Harney and others. After steeping, it becomes a bit more cinnamon stick-like. Still sweet, but more spice than candy. It’s a medium orange-brown and clear.

The flavor has just the subtlest orange, which comes out mostly in the finish and aftertaste. I do taste clove, but just barely, for which I am grateful.

It’s rather the Constant Comment flavor profile, but with sweeter cinnamon and less heavy on the clove. Different from the Harney — less like red hots, more like stick cinnamon.