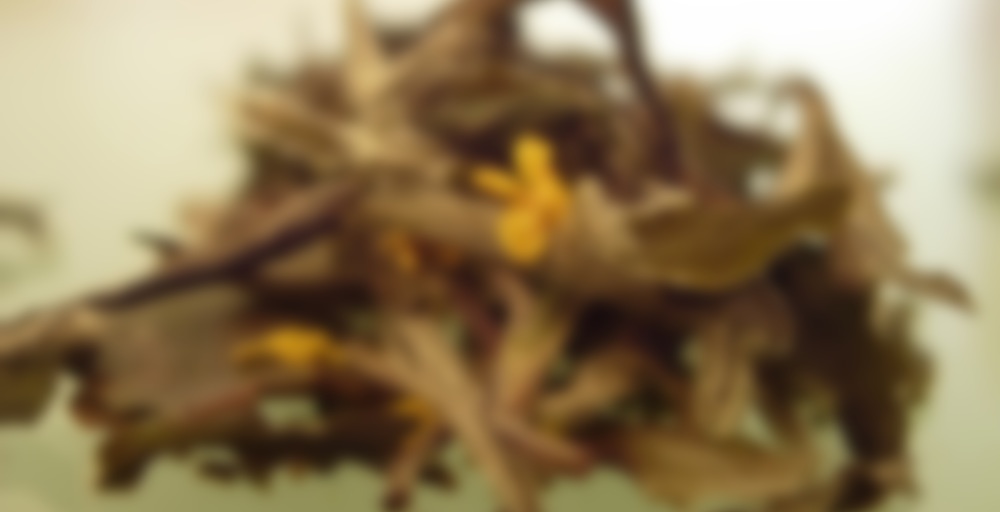 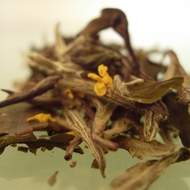 Essence of fresh picked peaches infuses the senses in this blend of organic white peony and aromatic osmanthus blossoms.

I had a much needed nap after work this evening, and actually felt a bit better after I woke up. A few hours later though, my head began to hurt again and I began to feel a bit sick. Knowing that a steaming cup of tea would do the trick, i ventured into the kitchen to try another sample, and reached for this one. A nice, low-caffeine option.
…except that according to art of tea, it’s a medium level caffeine tea.
Womp womp womp!
Not to be deterred, I brewed it up anyway. The dry leaf feels light and fluffy, and it’s a feeling I’m beginning to associate with white tea. It smelled strongly of juicy peach, and if I inhaled deeply enough, it almost smelled like peach-scented chapstick. Perhaps that’s not entirely accurate, but there was definitely some sort of lingering cosmetic feel to it.
Anyway, brewed it up as per the suggestion. The strong peach smell had faded some by the time the cup was sitting in front of me, and only by burying my face right in the tea could I get that peach blast i’d originally smelled.
Before I took my first sip, I mentally prepared myself to expect a lightly flavoured tea, a subtle tea, because it was white.

You know? i must say I was pleasantly surprised. This is absolutely a subtle, lightly flavoured tea. But it also has a creamy quality to it, not entirely unlike Butiki’s Cantaloupe and cream (although don’t get me wrong, CaC blows this tea way, way out of the water). I just mean that there’s a creaminess (perhaps it’s the underlying white tea?), and it lends itself well to subtle flavouring.

I’m going to happily finish off this sample (or maybe i’ll add it to the great Canadian travelling tea box to let others try), and who knows, maybe I’ll get more of it. I really didn’t dislike it at all, which is honestly what i was prepared for. Oh, and I added a few pieces of rock sugar, and that seemed to bring out the peach flavour a bit.
Goodnight, steepster friends.

On first taste this was AMAZING! My first pot managed to be juicy and sweet and delicious and everything I could have possibly wanted from a light based peach tea. Nothing was too overwhelming but the flavors were strong and pleasant and went well with the tea base. There was nuance. Delicate tendencies. You get my point.
So I geared up for my second steep all happy and excited… and then it tasted all watered down in comparison.
I can’t get this tea to re-steep correctly. I’ve tried extending times… hotter water… colder water…. leaves in the cup while I’m drinking… EVERYTHING. It just doesn’t want to do it.
This tea would have been rated higher if I could get more than one cup/pot of of the leaves.
It is totally yummy though. But the price is making this a treat tea for me.