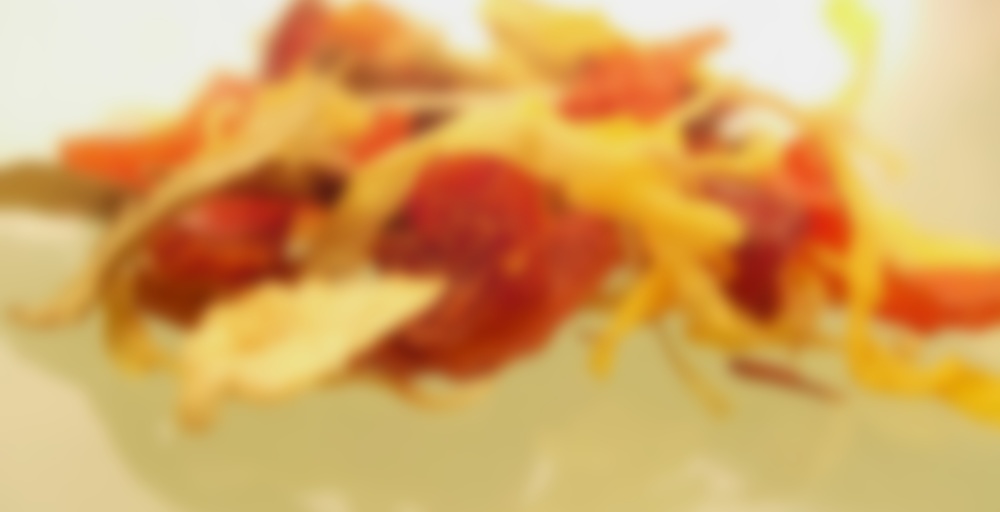 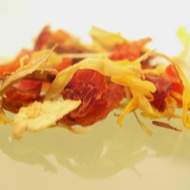 This tea is a beauty to brew. It is the perfect essence of fall. A marigold mixed with changing oak leaves. The color is an amber mixed with orange.

These herbal fusions taste more “grown up” than others I have tasted by Teavana. Instead of being overly fruity and syrupy (which I love, and they have their place), this is like a wine full of apricot and pear notes, rounded out in taste by the rooibos. I really like how the apricot flavor comes out in this. I didn’t even know this tea had rooibos in it until I read the description. The leaves were hidden in a tea sac style tea bag that was closed on all sides.

I would certainly buy more of this tea. Especially for nights where I need no caffeine. Thanks again, Jaime, for making these samples possible:)

That sounds lovely. I take it the hibiscus isn’t too strong a flavor? I’ve had it overpower enough blends that I always worry when I see it on an ingredient list…

This one’s a favorite of mine, too. I’m glad you like it!!

Thanks to TeaEqualsBliss for sending me a bit of this to try!

Delish! I love the blending of the apricot and the pear – the flavor is very authentic, so authentic that I can almost taste the pulp. It’s very nectar-like.

I do wish this blend didn’t have the hibiscus, but, it is still quite acceptable with it. Yummy!

Darn you Hibiscus! Sneaking up on me!!!! You hang your head when you approach me now, don’t you!? Not knowing how I will react! You used to attack but this time around more of a tip-toe!? Time will tell…

Jaime! Thanks for this sample from Art of Tea! You Rock!!!

This smells like Apricot, Pear, Apple…tastes likes Apricot, Apple, Orange, Hibiscus. But the Hibiscus isn’t overly distracting! I think the tartness pops more the colder the liquid gets, actually…so I would personally try and drink this while hot to avoid the tarty hibiscus…

Not too bad! Glad I got to try this!

If a good tea is a marriage of fine ingredients, rooibos is like a favorite bachelor friend. I hope he finds a worthy mate someday, but regardless of who he hooks up with, no matter how good an idea it seems, it’s never quite a match. This one looked promising, though. I like apricots, I like rooibos, and it sounds like a good idea to put them together. How nice too, that somebody came up with a blend with something other than vanilla. Don’t get me wrong, I like that combo in moderation, but have been steadily collecting vanilla-rooibos blends and getting a little frustrated with their similarities. It was nice to encounter something different for a change.
Following my sisters advice, I used a whole tablespoon of tea in my strainer, added hot water and set the timer for a full five minutes. Then I got busy with the housework and forgot completely for another 5 minutes or so. Rooibos is generally pretty forgiving of long steeps, so no big deal, and I figured it would give the flavors a chance to develop.

It was … ok. I wanted to like it. I even added a little sweetener to “bring out” the apricot flavor. Sadly, it just didn’t float my boat. I could taste the apricot and the rooibos, but they were just not getting on. It wasn’t BAD, but there was no chemistry, no spark. I was very disappointed.

“It’s better iced,” said my big sis. I resolved to try again, but wasn’t expecting much the second time around. Fortunately, a day came in which I looked at the snow falling outside and out of pure contrariness decided to make some into iced tea. Surprise, Surprise! Cold brewed, the apricot was refreshing in more than one sense and managed to harmonize with and not be overpowered by the rooibos. I didn’t need to add anything this time. Good stuff.

In conclusion, Apricot Escape is aptly named. It certainly is an escape from my other rooibos combos, which were all starting to taste the same to me. And it’s really good cold. Just not hot. I think I’ll label the rest of this sample “Iced only.”

(chuckle) But you REALLY want to fix the cute bachelor up with somebody!

I was so excited to find the Traveling Tea Box waiting for me last night and couldn’t wait to dig in! It was already late, so I decided to grab an herbal teabag – something quick and easy to brew that wouldn’t keep me awake – as my first sample. I like apricot, so went for this one. Unfortunately, I didn’t take the time to read the ingredients list and see that this blend includes both rooibos and hibiscus…two flavors I avoid. I didn’t get much apricot from this tea: just a vague fruity flavor fighting with lots of woody rooibos and that tart hibiscus aftertaste I dread. I finished my cup but definitely wouldn’t drink this one again.

Switching over to caffeine free blends for the night. I’m pleasantly surprised by this one. It smells of juicy apricots right out of the bag. I can’t get over how authentic it is. I much prefer this hot rather than cooled to room temperature. The honeybush/rooibos competes with the apricot as it cools and while I do enjoy those flavors, the apricot is what makes this tea so enjoyable. A nice tea for a nightcap.

Grabbed a sachet of this from the tea box. It was a little too heavy when it was hot, so I put it in the fridge, and it’s quite nice cold actually! It needed some sugar to bring the flavor out, but the flavor is a nice, clear apricot. It’s not the best fruit tea ever, but I do enjoy the uncomplicated taste.