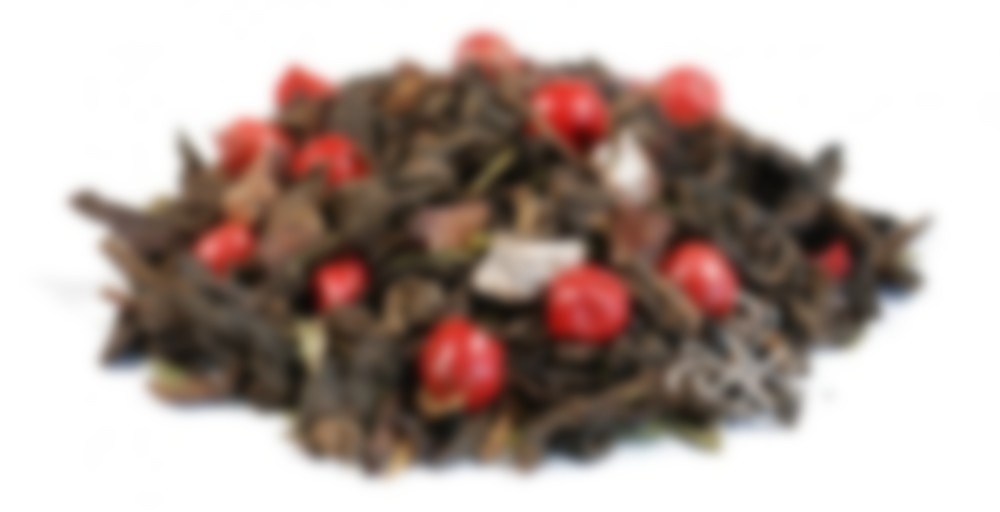 Awaken your holiday spirit with this sweet, aromatic blend. Thick and dark once steeped, Dark Chocolate Peppermint joins wintery notes of cooling mint with the taste of smooth, decadent chocolate in an infusion that will fill you with festive thoughts.

I poured in the hot water, and the whole kitchen smelled like peppermint. Mmm.

Mmm, it’s a nice minty chocolate, more mint than chocolate. It’s rather sweet and very holiday. There’s also a little tea note, though I can’t pick out what sort of tea with the other flavors. I know it’s pu-erh from the ingredient list.

This is really almost a perfect chocolate minty tea. I’m going to try adding some cocoa powder to the infuser on my second steep, as I often do with chocolate teas to make them more to my taste.

It is gooood with the extra chocolate, though the whole flavor has diminished thanks to it being a second steep. Next time I’ll add chocolate for the first steep, as I have another sample bag.

By itself, I think it tastes like York Peppermint Patties. Chocolate in teas is typically a more subdued note, and sometimes those notes come from the tea leaves themselves, too (many Chinese blacks have cocoa notes to them). I think latte style with chocolate almond milk would be better than just throwing cocoa powder in though to get moar chocolate since then it would be creamy and thick, myself.

Throwback Thursday! So I decided to make a cup of this tea this morning, as my memory of it was that it tasted like York Peppermint Patties or Thin Mints, and it is Girl Scout Cookie season, so it seemed appropriate. (I just got my haul: four boxes of Samoas which is obviously my fav, a box of Tagalongs, and a box of Trefoils, since I’ve taken a liking to dipping shortbread cookies in black tea). This is one of my oldest teas, so I may mark this for sipdown… but it also has a pu-erh base, so I’m hoping this has held up well despite the age, and may continue to do so if I continue to put it off a bit longer?

I don’t know if I would wax poetic as much about this tea as I did when I originally reviewed it, but back then, I still hadn’t tried as many teas yet. I’m sure at the time of that review, it probably was the best tea I’d had up to that point and deserved the rating I gave it then; dropping the rating from my previous 95 now isn’t so much that it “no longer holds up,” but more that I have a better baseline of comparison now. That said, I still really enjoy this one. It is a very smooth pu-erh without any overly fermented tastes that I often get from the pu’s used as bases in flavored blends. I wouldn’t even say this is a particularly “earthy” tea; rather I get these lovely notes of a very natural cocoa and a sort of refreshing, wintergreen pine sort of flavor that feels brisk and refreshing on the tongue. The tea has notes of chocolate but isn’t a heavy, sweet chocolate tea, leaving more of a layer of bittersweet dark chocolate beneath a very strong brisk mint flavor that really pops in the mouth and lingers in the aftertaste. The tea is even still quite nice as it starts to cool. I usually avoid chocolate teas iced, but I’m curious to try doing an iced tea of this as an experiment, because I think with the strong minty profile it would hold up nicely. That is going on the to-do list.

So, still loving this. I still attest it is like York Peppermint Patties or Thin Mints in a cup, though not quite as heavy as those two things on the chocolate. I’ll probably rebrew this on my lunch break because it’s really hitting the spot!

Hmm, that’s the only time I like mint… With chocolate :D. Sounds yummy.

Samoas and Tagalongs were always my two favorites… and those gooey strawberry cookies they discontinued ages ago.

I picked a sample of this up at Traveling Tea awhile back, & if I had bothered to sweeten it, it would be like drinking one of those thin mint cookies, all the way down to the biscuit.