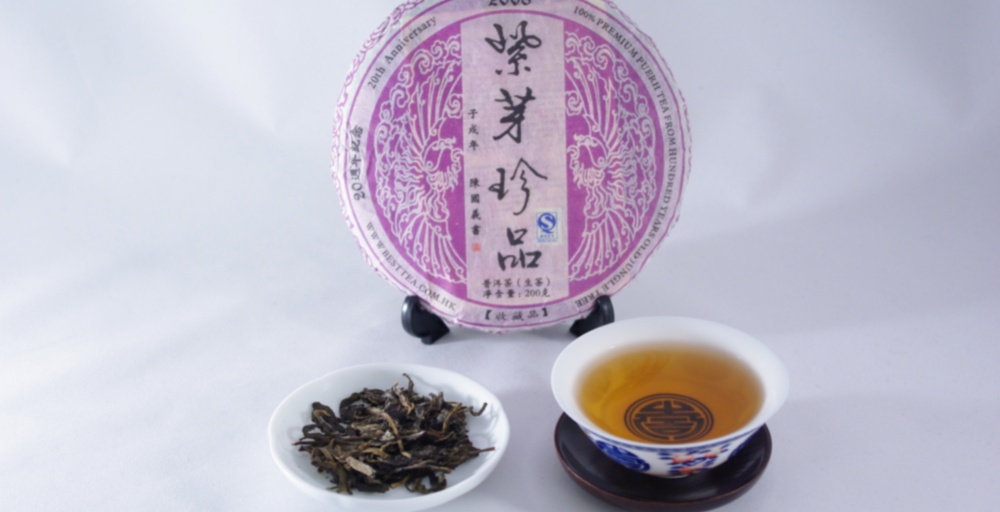 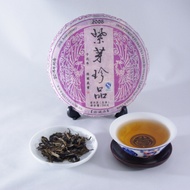 A rare botanical specimen, Purple Tips only exist in about 20 percent of the wild tea trees. These purple tips were found and plucked from trees over 500 years old grown in the ancient tea gardens. Made with a bud and two leaves, this tea is has a deep malty flavor with a strong lingering aftertaste, which is comforting, yet invigorating. Although this is a young cake, it possesses the characters and the “chi” of a older cake.

I’m coming near to the end of my sheng samples from Bana Tea Company. I would have tried them all before now but sheng is something you need to sit down and pay attention to.

I steeped this in boiling water for one minute after a quick rinse of the leaves. I am getting something like a slight apple cider sourness along with a bit of malt. Can a tea be “tangy”? Well this one seems to be, sort of.

For the second steep I decided to go for 30 seconds only. This seems to have been a good decision since the tea is mellowing out a bit. I am still getting apples with a bit of burnt toast and now some sweetness. It seems very fresh and aromatic.

Third steep, I used water that was less hot. More sweetness and mushroomy-ness, it’s very mild and pleasant. This seems like one that would only improve with age although it is quite ready to drink now.

If you want to go on a sheng adventure you certainly can’t go wrong with this sampler pack from Bana, I’d highly recommend it. Not a bad one in the bunch so far…

So been going pretty strong with this pu-erh kick, and here is another one. After reading Ricky a few weeks ago, I decided to order this sampler (7 different pu-erh teas) to give it a shot. The presentation is fantastic, individual sealed wax paper bags all housed in a silky drawstring bag, along with some pu-erh newsletters ad information sheets, lovely.

The tea itself looked actually purple, I am not sure if that is why this is named or there is another reason, but they were dark, very dark, practically purple. I used less tea than normal as I have been trying to get a few brews out of this, but a quick rinse (5 seconds) then two quick brews (1 for 20 seconds, 1 for 30 seconds).

The liquor is light in color, has a slightly earthy note to it, but barely any aroma at all. The aroma and then taste and mouthfeel is very light and pleasant, not what I have come to expect from pu-erh, at all. This one was definitely sweeter than others I have tried, did not have the overpowering natural smell, in fact I feel like either I could have used more tea or a longer infuse time.

Honestly, if this was my first pu-erh (Numi Chocolate aside) I would have never had any trepidations as this was sweet and light and gentle, with a slightly pu-erh-esqueness that I am familiar with but does not scream “pu-erh”.

Will brew up the rest and see if I can add more.

Well each sampler is exactly eight ounces so it’s perfect for one cup of tea. From the color I think this is a raw pu-erh so it’s a bit lighter. I realized the raw pu-erhs tasted a bit like Ti Kuan Yins. Can’t wait to read the rest of your reviews =]

That makes sense, this was definitely lighter than I expected, I will use the rest of the sample on a cup and give it a better shot for the tea. Can’t wait to try the rest!

I had the same issue when I brewed up Bana Tea’s Special. I used two teaspoons and felt it was super light. After that I just started to use the whole sampler. Maybe I’ll try this one this coming Friday.

Quick Note Thanks again to Amy Oh for sharing with me. I’m slowly but surely going through the samples :)

1st 3secs Sweet and slightly bitter that turns savory and tangy. The sweetness is fruity and subtle, the aftertaste reminds me of a flavorful green tea.

2nd 5secs Sweet, fruity, bitter, slightly floral. The taste becomes savory and really tangy in the mouth but it retains the floral notes.

3rd 10secs Sweet and fruity, some bitterness/tangy that fills the mouth. There are floral notes and slight vegetal/savory notes that linger. The aftertaste becomes sweet in the mouth after a while.

Final Notes
I made about 7 steeps. It held up its taste through the steeps. I was incredibly happy when I finished drinking and decided to look up the tea here. While I was drinking I was thinking “Hmmm I know where this is from… This tastes like Lincang Sheng.” When I saw the description I felt like I aced a Pop Quiz!

I’m not a big fan of Lincang Sheng, for some reason I prefer it as a ripe, it retains some of it’s juicy/tangy properties with the ‘heavy’ properties of a ripe, but still this might be a good one to age at home (even when it says ‘vintage’ it is a REALLY young Sheng).

I got this tea in Bana Tea Co.’s sampler set of seven teas.

This is just a sidenote, but I love the presentation of the teas at Bana.. many tea companies randomly toss the tea in whatever boxes or containers may be at hand, with no explanation.

Bana’s tea sampler was a mere $10, and yet it came in a cute little silken drawstring bag, with each tea carefully labeled in a vellum envelope, and sealed with a Bana Tea sticker. The order also came with printouts of the past 2 company newsletters, a pamphlet explaining each tea in the sampler, and a printout of common puerh FAQs. The entire package just oozed care and love for the teas enclosed. Before even trying the teas, the packaging reflected the care with which the teas were probably sought and selected. Many tea companies would do good to take note in my opinion!

Sorry, tangent over. Onto the tea!

The leaves of this tea were small and unassuming. Tightly compressed, olive in color. After a quick rinse they had a musky, earthy aroma. Spinach, old library books, and a touch of sourness. A sweet finish followed the sour, but from the aroma, I could tell I was in for a pretty strong brew!

The cup itself was a dark orangey-red—quite dark for a 2008 puerh! Then again, it probably was not stored in rainy, cold, dry climates where I tend to live. :) There’s something to be said for proper storage..

At first sip, the tea was a strong, dark chocolate mousse flavor. Following was a homemade applesauce note lingering in my throat. I like the description that says that this tea has a lot more chi/qi than most cakes its age.. it definitely has a lot of strength and maturity to it.

It’s still a bit strong for my usual tastes, but I could see how it would age really well. It was the perfect tea to energize me on a day where my energy was lagging!

Don’t apologize for the tangent, you sold me on the sampler!:) Are there any green pu erhs in it?

That’s great to hear! It’s a real treat. I think technically all 7 teas are green, but each tea tastes completely different. Looking forward to hearing what you think of them! :)

It will be quite a while before I have even the measly $10 or cupboard space. :( But I’ll let you know!:) I just had my 1st unflavored pu erh sucesses (2 cooked and a raw) this week.

Aww I love samplers! Seems they give you most of their tea except for the tea bricks. Not bad.

Yes, it was a really generous sampler, especially considering the price!

Loved this tea. Inhaling the first steam from the rinse elicited a rare, spontaneous “wow” that pretty much held through to the final sip. The brew doesn’t have the dark intensity of other puerhs I’ve tried — it’s more silky than velvety yet somehow equally satisfying in its subtlety. A little smoky but very clean. I’d agree with the company’s “malty” description, but in an understated, well-balanced way; it’s a great full-mouth flavor that’s reminiscent of the gentle, rich scent of leaves walking through the woods in autumn. There is mild astringency after a long brew, but that wouldn’t deter me from drinking it frequently, because it is delicious.

I’m pretty useless at describing tastes but I love this puerh – it has a really full mouth feel and very balanced taste.

A while ago, I bought a packet of Bana pu erh samples. It turns out, these are the perfect size for a single tasting in my gaiwan.

I intended to taste and write about this one last weekend, but after rinsing and letting the leaves sit, I never got to it. So I let the leaves dry out, and then I tried again this weekend. I rinsed again and let set for more than 15 minutes.

The liquor started out almost opaque and gold, and with subsequent steeps became clear and amber. The mouthfeel had some interesting changes in the middle steeps. A couple of them were so smooth as to verge on oily.

The aroma and flavor didn’t change much from steep to steep. It’s a little smoky, a sort of dusky aspect. Also a bit more fruity than some others I’ve had, apple maybe? But the primary aroma and flavor was the buttery, white chocolate, cocoa flavor I’ve come to expect from shengs.

This one isn’t bitter, and isn’t sweet. But it has character.

Very nice (and different) sheng.. Tastes malty and sweet with a “fuzzy” mouthfeel.. Later steeps remind me of apricot, but the malty taste persists throughout all of the steeps. A delicious tea to be had.