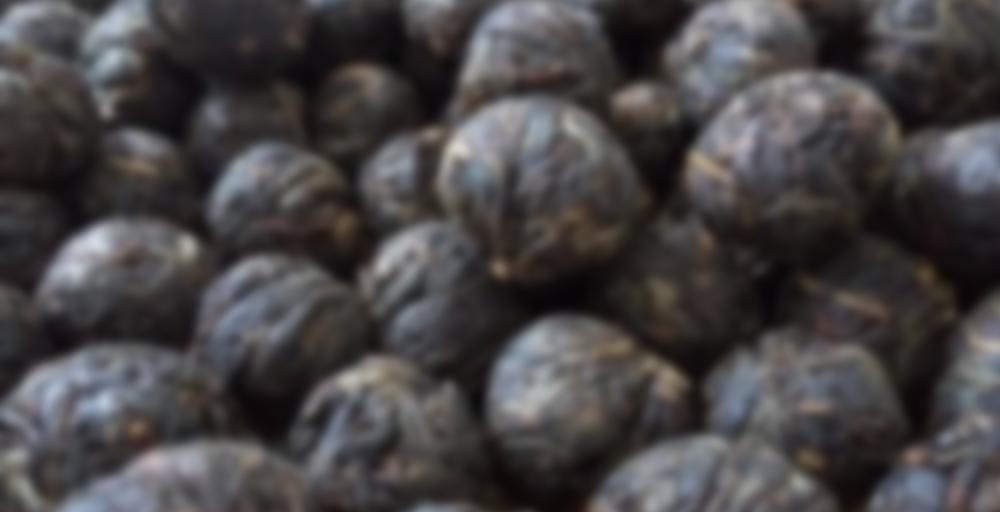 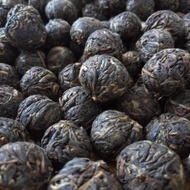 by Beautiful Taiwan Tea Company
83
You

Each Orb weighs about 6gr., enough to last you all day no problem!

1. Jing Mai – The remote mountain in Yunnan near the border with Myanmar. Magical ancient arbor tea trees grow in the wild and in tea gardens. We visited last year. It’s amazing.

2. Gu Shu – “Ancient Tea Tree”. This tea is made exclusively from tea leaves that were harvested from old trees, some as old as 500 years! (A lot of so-called “Gushu” is mixed with leaves from younger trees… this one is not).

3. Oolong Orbs – This tea is roasted in a high temperature pan to about 70% then hand rolled into 6-7gr orbs.

This is the real deal! Obtained directly from the farmer who decided to make Oolong this year from the summer tea instead of Pu er. Think of this tea as a Sheng Pu er Black Tea!

Don’t let this small shape fool you. There is a lot of tea in each one!

Let it soak in boiling water for a few minutes and then steep like normal. 100% old arbor material from late Spring 2016. Superb daily drinker for now or let them age no problem. Drink GUSHU every day!

Well, I screwed this one up early on between oversteeping and not knocking down the temp fast enough. I started off with the suggested minute-long soak in boiling water (which produced a drinkable cup) and lowered the temp only slightly with each steep until I realized it was still too damn high. Finally got down to 190 and decided that was good.

In the beginning, even while the tea was kicking my ass with bitterness and astringency, the liquor was thick and sweet with a light mushroom brothiness, some unplaced fruit, cherry, plum, unplaced herbs, minerals, light apricot, walnut/walnut skin tannins, very light floral incense and faint butter and caramel. I’m glad I kept pushing. After the onslaught due to tea abuse subsided, there was an after party featuring crazy date sweetness in the back of my mouth and a pleasing sourness on the sides of my tongue. Lasted a good 11 steeps even with my screw-ups. Sparkling, clear orange liquor with a pink tint.

I think if you pay attention to this tea, you’ll get the right amount of bitterness and astringency. I wish I had more :/

EDIT I wanted to add, if you do buy these, buy more than 1 (unlike me) so you can play around and find the water temperature and steep times that produce your favored cup. I can see it being light if you’re not the type of person to push your brews, but it also has the ability to be darker and quite complex.

It’s a nice one, and very convenient.

Patience is the key word here. First, patience as the ball opens up. It takes it a while, but luckily the early infusions will have some flavor if you let the ball sit and do its thing.

Second, patience while drinking. This is a subdued tea. The flavors are very light – the overall flavor, in my humble opinion, is basically a black tea blend. It has some fruit and floral notes to keep it interesting (even some spiciness that reminded me of black peppercorn), but really, I tasted a high-quality English breakfast tea.

Not that that’s a bad thing, but if you are coming here because you like a whallop of flavor like you would find in an oolong or pu’erh, you won’t find it here. On the other hand, there isn’t any bitterness to subdue – and I was brewing it HARD to find some flavors.

So, I find this tea to be a novelty, and maybe a good gateway for those looking to bridge the gap between English breakfast and more authentic Chinese teas. However, for those already drinking more serious teas, just be aware that this one is very mild and easy-going.
*
Dry leaf – honey, dried apricot, slight perfume floral. In preheated vessel – honey-lemon black tea notes.

Taste – light black tea blend with notes of honey and apricot. Hints of black pepper and lemon. Aftertaste is lightly fruity with some citrus cutting through it.

This was one of four different gushu oolong orbs I purchased within the last year. I had been toying with the idea of doing a gushu oolong shootout, but ended up reviewing two of the three oolong orbs I purchased from What-Cha and then shelved the project. Within the past week, however, I got the urge to try at least one of the two remaining teas and chose this one purely because I wanted to try one from a different vendor. I didn’t expect to, but I ended up loving this tea.

Prior to the rinse, the dry tea ball produced pleasant aromas of stone fruits, smoke, wood, grass, hay, herbs, and brine. After the rinse, I began to pick up on scents of longan and wild mushroom. The first infusion produced a slightly more pronounced fruitiness, as well as something of a floral character on the nose. In the mouth, I picked up surprisingly strong, fully formed notes of hay, grass, wood, smoke, mushroom, herbs, and brine. Subsequent infusions brought out touches of bark, tart cherry, apricot, sour plum, nuts, caramel, butter, and minerals. I also thought I got touches of green apple and pear at a few points too. The longan flavor also finally showed up for me. Later infusions were dominated by minerals, grass, hay, funky brine, bark, and smoke balanced by pleasant caramel and butter tones. In the background, I could just barely detect lingering touches of stone fruits and wild mushrooms. The generally indistinct herbal presence also began to take on a more clearly developed camphor/menthol kind of flavor. Oddly, I do not recall finding any real floral notes in the mouth.

This was an interesting and surprisingly durable tea. It just did not want to give up the ghost. I’m guessing I could have easily gotten at least 1-3 more infusions out of this had I decided to push it. Much like the two Jingmai gushu oolongs from What-Cha, this demonstrated a funkiness similar to that of a young sheng. In other words, it was less like a traditional oolong and more like a cross between an oolong and a pu’erh. Unlike the two similar teas from What-Cha, this one had a better body and greater presence in the mouth, as well as greater longevity. I found it to be both a more approachable and more likable tea than the other two.

Thank you so much Andrew!

I was curious about these. I had a feeling they would be a cross between a Jing Mai Sheng and an Oriental Beauty, and they were. I played with this one starting out with short steeps, then lengthened time to three minutes after steep three, then five minutes. It could get a little astringent, but barely. The texture was very smooth, and the taste was dominantly floral with a sweet-sour like apricot fruitiness. It definitely leaned more Jing Mai then oolong for me, but it had the cleaner and smoother body of an oolong overall. The orb also lasted me the day, so you can play ball for it nearly as long as you like.

Sad news though: my glass gaiwan, my only gaiwan broke because the glass was cold from the forty degree weather seeping into the house going against hot water for a rinse. I rinse my utensils for the very reason of warming them up and not breaking them. Hopefully I can find a new one because Gaiwans really make the difference in the quality of my teas.