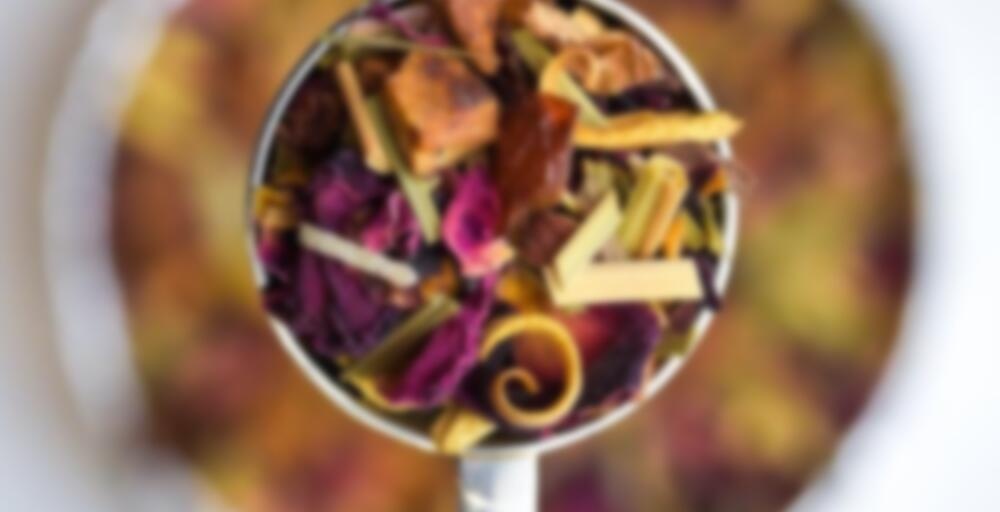 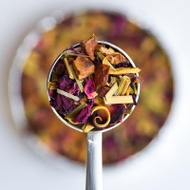 Everyone thinks their grandad is a bit of a retro legend but my grandad Ted is a true classic. He loves cruising around the world visiting tropical climates so this tea is perfect for him. With coconut, pineapple and lots of pretty flower petals, it’s Hawaiian paradise in a cup.

Forgotten that I’d rated this already when I grabbed it tonight for a swap with someone else. Decided to have one of the last cups of it, and then to put the rest in the swap box for someone else to try. Have I mentioned how much I love swaps (and how many I have here right now, waiting for me to send them off? A huge bag full, that’s how much).

Anyway. To the tea! Like last time, this smells infinitely better than it tastes. Even just sitting here at my desk I get a wonderfully fragrant, decadent coconut wafting over to my nose, with some subtle fruits in the background. Drinking it however just isn’t the same. I want more flavor dear Retro Ted, and less tartness.

Seems like this blend is made up out off many fruit ingredients like coconut, orange, pineapple and alot off lemongrass and hibiscus. The smell of the dry ingredients is very sweet and fruity. So i’m going to brew a cup for 3min with near boiling water.

The color off the brew turns out the be a pink/red like liquor and still smells great! My first few sips are when the tea is a bit to hot, but it tastes very sweet. my taste buds can seperate the hibiscus and lemongrass pretty good but the sweetness really comes from all the other fruits in there.

A very nice cup sweeter then i expected but then again i’m not used off drinking alot off fruit infusions. This is infact why i so appreciate to be able to sample 5 different blends from bluebird company. If the other samples are just as good then this one i’m going to order there for my summer fruit blends!

This tea is fascinating. I think I’m enjoying it? It has a very distinct flavour. The lemongrass adds such a unique flavour when combined with the coconut and pineapple. I’ll have to think more on this one as I finish my cup.

You’re welcome! I thought it was a bit odd, but I think that’s just my reaction to Pineapple and Coconut together! My dad loves it.

I didn’t much care for this one the first time I tried it, but I thought I’d give it another chance last time I placed a Bluebird order. Turns out I still don’t like it. It sounds good in principle – pineapple, lemongrass, coconut – a Hawaiian/tropical fruit tea blend. But no. It also contains rose, and I’m wondering if that’s what’s making it sit wrong with me. I’m not generally a fan of floral teas (although there are a few exceptions…), and I think it’s the rose-coconut-pineapple combination that’s kinda “ugh” to me. Most people seem to quite like this one, but I really, really can’t abide it. At least now I know!

That sounds like a very odd combination of flavors to me!

Sunday 2/28 another older bird and blend tea with cold brew pitcher route…. 1/3rd of tea went to the rug by TV in the living room evening 2/27 as I spilled my full tumbler off coffee table. Nice fruity tea with a sharp note. Would try and make a pitcher with a fresh sample bag in future if the opportunity presents itself.

Cold-steeped this for 24 hours. The flavor is better but still quite light. I would’ve liked more hibiscus or something to give it a little more OOMPH. Cold-steeping seemed to tone down the lemongrass quite a bit, so at least it was more pleasant and palatable this go around.

Note to self: If you want a piña colada just have the real thing. Piña colada tea is not your jam.

Today is going to be a tea day. With clothes washing to do and a cross stitch that will take an hour or so to finish my day is pretty much free and open. Makes a change.

So Retro Ted will be kick starting my tea day. The blend is made mostly of large pieces and looks heavily herbal and floral. It smells fruity, tropically so, I’m thinking pineapple and coconut. It’s an interesting smell, fruity yes but heavy on the lemongrass too.

The taste is mildly tart and sour to begin with, also strong lemongrass tones with some generic fruit tones amongst it. After taste is creamy and coconut-ty in a mild way. I’m finding the blend of fruit and lemongrass and hibiscus rather strange. It doesn’t blend perfectly but neither is it terrible. Also dry and rather herbal.

Not a fan of this one, may try the rest cold steeped. I wasn’t a fan of the lemongrass and hibiscus blended together, it was too miss-matched for my taste buds and the only redemption was the coconut after taste. I wouldn’t buy this one again but am happy I can at least drink it.

Last cup of the night, and although it’s caffeine free, I think this one may be a bit too fruity to use as my bedtime drink in the future. I also can’t imagine cold brewing this (although I’ll probably have to try now. I’ve mentioned that) so it’ll probably wait around in my drawer for a few months until the colder weather kicks in again.

I bought this as part of Bluebird’s pick-n-mix sample selection, as there were four teas I really wanted to try and I had an extra space to fill. So overall, I wasn’t getting my hopes up too high for this one, although it was still pretty high on my list of Bluebird’s teas to try. My flatmate Sam moved out today (it’s the end of the school year and he’s moving to Amsterdam on a placement soon) and his girlfriend Amy, another flatmate, wasn’t feeling too great so I obviously took the opportunity to use tea as a means of settling her stomach. After rifling through my drawers, she picked several teas out to try including this one, which I brewed for after our supper of freshly baked cookies. If she hadn’t picked it out, there’s a chance this could have sat in my drawer untouched for a couple of months.

The dry mix smells beautiful, and looks it too. Bluebird are great because their teas not only taste great, but look great too and the huge chunks of ingredients make them just gorgeous to look at. I say it every time I have a Bluebird tea, but I really do marvel at how pretty they are. I brewed it in my ingenuiTEA and it was pretty cool to see all the bits floating around and expanding.

In the time it’s taken me to type the note up so far, my tea has gone cold but I don’t think the flavours have changed much. It is, however, as I had suspected, better warm. The bright red colour when brewed made me wary that the tea may be overpoweringly hibiscus-y, but it’s actually a pretty mellow tartness just chilling with the other flavours rather than overpowering them. There’s something weird about this blend which I just can’t place, but I’m pretty sure I like it. In fact, I’m sure I like it, I’m just not sure I can place the flavour or could explain why. Pineapple and coconut are always a winner together in my opinion, although I was interested to see what I thought of this tea since coconut is generally a favourite flavour of mine in tea, whereas I’m yet to find a pineapple tea which I can drink happily – or I was until this, anyway. The flavours are immediately present and reminiscent of a piña colada, but the lemongrass is also prominent and adds an interesting extra dimension. This element kind of reminds me of fragrant Thai rice, and I suppose the reason it works so well could be that the coconut goes with both pineapple and lemongrass flavours effortlessly. I imagine it might be quite an odd combination without the coconut. The hibiscus keeps it tart (I added a sugar, although I shouldn’t really) and the rose petals add a wonderfully floral aftertaste. I am constantly amazed by the skill some tea blenders show, and Bluebird are no exception. This blend is truly inspired, and one of the more intriguing blends I have had the pleasure of trying.

EDIT: As it cools, I have just noticed, there is a kind of honey sweetness on the finish of the sip. Paired with the lemongrass, which remains throughout the sip, this oddly enough reminds me of those lemon flavoured throat sweets with the honey inside that you suck when you have a cold. Not in a bad way, though, it’s not particularly medicinal. It’s more like what those throat sweets would taste like if they were actual sweets, instead.

I don’t normally talk about my cupboard in my tasting notes, but just for the record I’m down to 250 – was at 358 in the middle of January. Would like to gradually reduce it down to about 150, but for now I’m feeling a lot better about it.

Congrats Dexter!! Over 100 teas is amazing!

So I can send you more tea? giggling that’s awesome….you can do eeeet!

Seriously, congrats Dex! I’ve also been trying to whittle my cupboard down, & I haven’t done a count lately, but I’m hoping to end the month around 300, & then keep bringing it down to a reasonable collection of teas. I really want to be able to drink a cup of each one every month, but I don’t want to waterlog myself every day, & I don’t want to drink them just to get them drank. I want to savor them. Good luck to both of us!

My cupboard says I have 240 but that doesn’t count samples I got. I have no idea how many I really have!

Thanks guys – this 100 was pretty easy, I had lots of samples and small amounts – the next 100 is going to take some time. The good news is that I’m not stressing as much about it.
Conservative, periodic orders, combined with a balanced approach to drinking older teas, samples, and favorite is the plan.
Terri I agree I don’t want to feel like I’m FORCING myself to drink tea, I need to find the balance. Thank you, but it’s ok – you don’t need to bribe Sil for an address – really I’m good. Thanks anyway. :))
TeaBrat – denial is a good thing – you won’t stress about it if you don’t know.

balance is key.. otherwise it just feels like work. :) i just think of every cup as being a step towards an eventual sipdown haha

Balance between teas I already know I really love, & teas I’d like to sample…I got plenty of both!

TTB: This one was not all hibiscusy! I enjoyed it