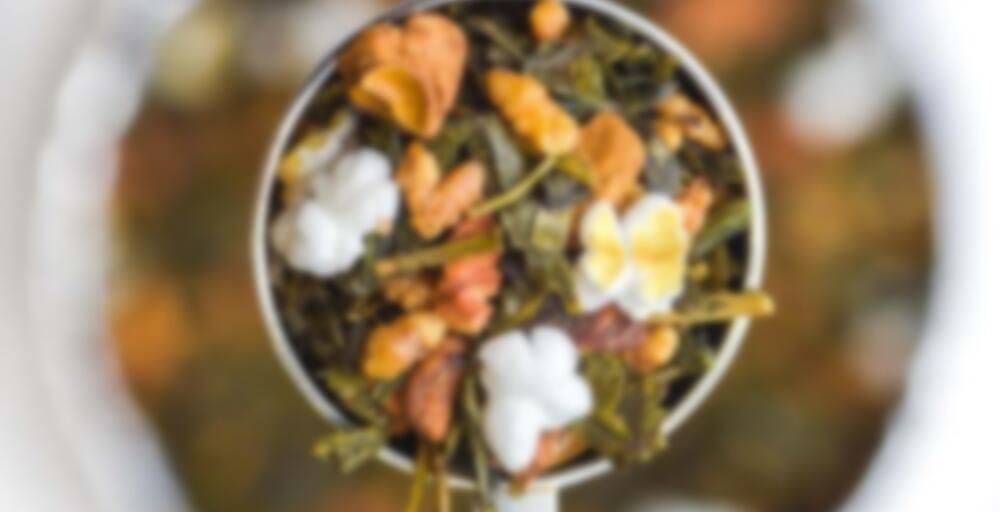 This blend of roasted green tea, popped rice and toasty apples is a bit of a tea Marmite. Some are addicted to its grassy, savoury taste but it’s not for those with a sweet tooth. Don’t worry though, Genmaicha fans will absolutely love Bird & Blend’s unique twist on the classic Japanese ‘popcorn’ tea.

Not bad not bad! heavy on the rice, which I like. A very mild apple note that blends surprisingly well with the genmaicha. I would buy some if it was local!! Sadly though, I missed out on trying it while hot. I got a phonecall and when I got back it had chilled… a well. The one little sip I did get was kinda floral, in an apple sorta way. Made me curious!

Out of the zip bag it smells with green tea and dried apple.
After steeping it seems a bit murky, lightly golden. Smells with popped rice, apples and the base teas.
The taste is heavy on the popped rice, which is good, because I love that aspect of genmaicha. Plus only a bit of dried apples in the background, a trace of cinnamon and strong grassy character.
Not bad, but seems too watery and bland.

I normally don’t make caffeinated tea in the evening, but this just sounded so much like what I wanted (an apple-flavored genmaicha) that I gave in. My sampler is ridiculously old (seriously, what tea do I own that isn’t at this point?) but still sealed, so hoping it isn’t totally trash green tea at this point. If it is, there is always cold brew, I suppose…

The aroma mostly smells like the nutty, toasted rice aroma of the genmai, though I am picking up a wiff of cinnamon as well. The flavor… hmm. I can taste notes of apple, cinnamon, and possibly if I squint some clove, but the flavors are quite light/delicate. Mostly, the roasty genmai is taking such a strong center stage its drowning out those other flavors. Not sure if its just the age of the tea, the fact I tend to go pretty leaf-light on greens to avoid bitterness, or if the blend is always like this. The sampler is large so at least I can experiment with more leaf than I typically use for greens and see if that brings out the apple more… but honestly, I just imagine that then I would get more genmai into the scoop and probably end up with about the same sort of flavor.

This is a wonderful concept… the apple just needs to be much stronger. I can taste it, and I’m tasting it just enough to want so much more of it combining with the warm comfort of toasty genmaicha. It isn’t quite what I was hoping for, but still warm, soothing, and satisfying on an autumn evening as my pure black cat does her best corpse impression in front of the oil heater. I’d go check if she is actually still alive, except that I can hear her snoring across the room.

When I had bought this I had gone only off the name and it was a nice surprise to see it was a green tea with genmaicha. I hadn’t tried genmaicha before, although I think I have some in the cupboard.

My first few sips I was confused, I was tasting a roasted/toasted flavor over everything else. Then a few more sips and I was able to taste some of the apple. I am getting some of a toasted apple note, I just think there is a lot of other subtle flavors I just haven’t really tried before and that are distracting me from the toasted apple. I am now eager to try a straight genmaicha tea to try and distinguish the flavors more.

In the end it was a nice cup, a light and complex flavor that I am still trying to work out an hour after I’ve finished.

Day 12 of our Advent Tea Swap. From amandastory516.

This one smells amazing! I don’t get apple per se, but there is a sweetness in the aroma that mixes so nicely with the toasted rice. I let my water cool a bit too much so I’m hoping the flavors come through.

I really love this one! It’s fruity and just a little toasty. Definitely one of my favorite green teas that I’ve tried.

65
Not Recommended
Cameron B.
2718 tasting notes

This surprisingly came out a little bitter despite being steeped for only 2.5 minutes…

This tea is a bit older (as most of my teas are at this point), and at this point it’s mostly just a generic genmaicha. Although looking at my previous note, it seems like I didn’t find much apple flavor when it was new either.

I do like genmaicha, so I don’t mind, but I have much tastier genmaicha in my cupboard. Sorry, B&B, this one just isn’t special to me.

At least it wasn’t just me!

Such a good idea, but the execution isn’t quite there I guess. :(

Thank you Sheherazade for the sample!

Calling this blend ‘tea marmite’ is, I think, a pretty big stretch and probably not the best selling tactic if Bluebird Tea Co. wants to get North Americans buying their blends. I’ve had marmite and I certainly was not a fan, nor are most North Americans; that’s one food from across the ocean that I can’t see catching on here. However, this tea? It’s got the potential to, if done correctly.

Genmaicha is one of those teas that I consider a cupboard staple; it makes a very soothing, calming cup of toasted brown rice goodness and it also a great blend for sharing a pot with among friends – and for people truly new to tea who haven’t even come across Genmaicha it’s a good conversation piece as well; explaining the origin of adding brown rice to tea to stretch it out among the lower class in ‘old Japan’ in a fascinating thing to here and gives insight to some just how important tea is in some cultures. I, for one, remember that fact/‘origin story’ being one of the most interesting to me when I was first getting really into tea outside of the flavored stuff offered at local chains such as DAVIDsTEA.

Of course, “Genmaicha with a twist” is a fantastic thing too; one a think more companies should run with. Some of my particular flavourites are Nina Paris’ Japon, Verdant’s Minnesota Blend, and Ette Tea’s Mango Sticky Rice. Apple seemed like an obvious, but untapped route – until now.

The initial wave of flavours was a very roasty brown rice and almost barley flavor; this is by far the best part of Genmaicha to me. If the level of roasty/toasty notes isn’t strong enough I’m going to be disappointed and if it’s too concentrated or has a “burnt” taste, like burnt toast, then I’m probably not going to be able to make it through the cup. However, this strikes a really nice balance between the two and has a lovely robust roasty flavour without overwhelming some of the other things going on.

Underneath that first, and most important flavour, was a mild vegetal note – there was some grassiness but mostly it was very marine with a bit of a seaweed flavour. This part of genmaicha is less important to me personally; as long as I can taste the green tea and it isn’t bitter I’m usually a happy consumer and both of those criterion were definitely checked off in this case. Now we get into the most important part of this particular blend: the apple! I’ll admit I didn’t taste it at first; but once the liquor had cooled I started to notice this very bright, slightly tart apple note at the finish of the sip that was lingering into the aftertaste. It’s definitely a greener apple; think Granny Smith or Sundance apples. However, the tartness and slight sweetness provides a really nice contrast between the flavour and whilst fairly simple I think this would be really enjoyable as a flavoured Genmaicha year round, but particularly in the fall.

Definitely worth trying, if you get the chance!

So intrigued by this one – I’ve loved toasty + apple flavours elsewhere, so it stands to reason I’d like this one too!

Very intriguing! I love genmai cha too, and the blends. This is something i clearly need to try, as I also love apple teas.

I wasn’t sure about this one when I tried my first cup, but I think now that I’ve more or less recovered from my cold, I can give this one a fairer chance. I gave 1 tsp of leaf 2.5 minutes in water cooled to around 180 degrees. The resulting liquor is a quite surprising yellow-orange. Unexpectedly vibrant!

To taste, it’s quite a savoury tea. I can taste an almost starchy baked apple, sharp rather than sweet, and a toasty undertone from the rice. It’s a pretty spot on recreation of baked apple, to be fair. The green tea base is sencha like, smooth and a little grassy. It complements the apple flavour well. There’s a tinge of bitterness right at the end of the sip that puts me off a little, because I usually gravitate towards sweeter teas. It’s nice to try something a little out of my normal range, though; almost a palate refresher! Another pleasing Bluebird tea.