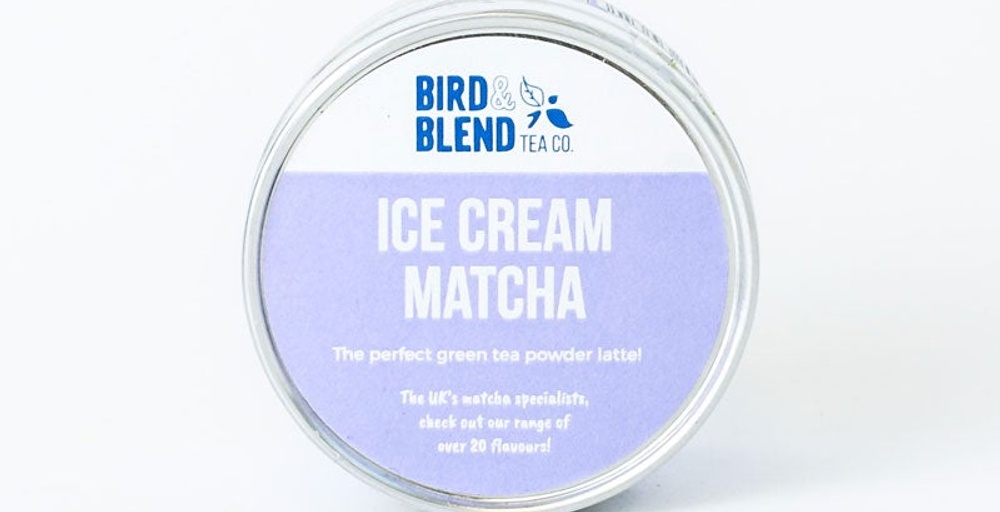 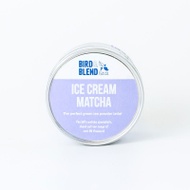 Our Ice Cream Matcha has combined everyone’s favourite summer treat with the nutrient and antioxidant superfood powder. Try it iced or hot and it’s awesome with milk!

I is for… Ice Cream Matcha.

Another sample from my Mix ‘n’ Matcha set, and I’m loving it! It tastes similar to the Mermaid matcha (going from memory here), so I think I’d like to try them side by side to see how they differ. James says he likes this one better, so it looks like I’m going to be getting a full size later on. Interestingly, he thought it tasted like coconut and vanilla and said it reminded him of the beach. I guess they do sell ice cream at the beach, so it works!

I have always really liked this one, as well!

blech. i seem to be in the minority with this one but did not like when i had it a few days ago. Just not up my alley and i’m not sure why. thanks for the share VariaTEA!

I desperately wanted to like this, but I absolutely hated it every time I tried it. It just tastes like butter water to me.

Been back to matcha crazy lately. That’s practically all I drank for years. One of the reasons is our USPS in our area has been very poor and I can’t order tea unless I have time to go track it down at the post office. This one had to be shipped twice, the first was shipped back without any notification… Etc. I understand that the USPS is under a lot of stress right now. Without going political, I’ll leave it at that. :P

So, long story longer… I still have a lot of matcha from over the years that I’ve been drinking and can always get more from Amazon which uses it’s own delivery people. I hope things get worked out soon.

I have not had this ceremonial style aka straight. I have only had it as a latte and with oat milk, this is now, one of my faves now. Creamy, tastes like ice cream but not sweet (thank goodness), vegetal, it’s just really really good to me. I saw there were mixed reviews so sometime soon, I’ll try it straight. So keep that in mind, when you read this review.

If I disappear for a week or two, it’s because I can not log into Steepster. I was just able to get back in today (again).

Oh gosh, since the last time I was commenting about usps in your tasting note, I didn’t know how dire the situation actually was for the entirety of usps and it is stressing me out. Now I’m seeing all these puzzle pieces fit together and it all seems like some conspiracy theory that I will vaguely mention is [virus + masks + mail in voting]. But I will stop now to not seem like a crazy person. For me it has absolutely nothing to do with Dem/Rep. A president shouldn’t be doing these shenanigans. Hopefully everything works out. Please America. Please.

Oh, but it looks like there is SOME good news about usps today anyway.

tea-sipper To your first comment 100% with you. I heard of the good news, however, although DeJoy was forced to backpedal for now, he won’t commit to fixing the damage that he’s already done. What a mess :(. I know some senior citizens who are not getting their checks and prescriptions. Ugh.

I had this in my smoothie yesterday and it was delightful but I forgot to write about it…oops.

Free sample from Bird & Blend in my last order – thanks! I’m not a drinker of straight matcha, though I did try this without anything added first. You could definitely tell that it wasn’t plain matcha as there was a nice creaminess to it, but it was still too bitter for my tastes (but I appreciated that there was no added sweetener!) I sweetened it with maple syrup and it was better, but still too strong – some milk made it perfect, though – nice and sweet and creamy. It blended together quite well even without much whisking (I’m lazy), which was also nice.

Not enough of an interesting flavour for me to buy (basically extra creamy, but I use milk in my matcha anyhow), but I think it worked pretty well.

I do not like matcha. I have had very bad luck with it in the past: gritty, bitter, earth-flavored. The descriptions of this just sounded SO tempting that I risked a little on my last order and bought the smallest sample I could possibly get and now I’m calculating how soon I can afford to get a full-sized container because this stuff is DELICIOUS. I generally mix mine with almond milk, probably a tiny bit too much milk for the amount of matcha powder, but it makes for a very tasty homemade latte, nice and cool on a hot day when you want a break from straight iced tea.

Double matcha day from Bird & Blend! This one is a single-serve stick, so I prepared it with 4 ounces of soy milk.

Wow, this is very strongly flavored. It’s definitely very vanilla and custard-like, which does make me think of French vanilla ice cream. There’s another flavor in there too. I guess it must be the carob, but I haven’t had carob in a long time so I’m not sure I recall what it tastes like. This reminds me somewhat of malted milk balls? Anyway, it’s not a bad flavor, I was just having a hard time placing it.

There is a little bit of a powdery texture to this matcha, I’m not sure if it’s because of the added carob powder or just the matcha base.

I will say, I find this matcha to have too much added flavoring. I can barely taste the matcha at all, and only if I actively look for it. It does seem sweet and mild, but I can hardly comment on it considering the amount of flavoring in front of it.

So I probably wouldn’t order this one, even though I do like the flavor concept. It’s just too flavored in my opinion.

Holiday Tea-son! I’ve been going through some car hell, but I won’t bitch about that here. I’ve been using tea to try to cope, and have sipped down my Coconut French Toast with Cardamom Maple Syrup and my Gingerbread Orange in the last few days as a coping mechanism… at least I got some sipdowns out of it?

So today is the eighth tea from my advent calendar, Ice Cream Matcha. I’m glad to get matcha on a weekend, otherwise I probably would’ve saved it until then anyway (I don’t really have time to get out the milk frother and make a matcha latte before work). I have a small sampler tin of this one, but since I’m such a terrible tea hoarder, I actually haven’t tried it yet. Prepared the same as the last single-serve packet, mixing the matcha in 100ml 175F water in my frother, which I mixed with 200ml vanilla almond milk which I warmed and frothed separately in the frother.

I’m actually getting a very mellow, sweet grassy flavor from this one, beneath a very sweet, sharp, rich vanilla note, with just a hint of something that tastes a little like honey or caramel to me. It’s quite nice, and the vanilla almond milk I use to make my tea lattes compliments this one well, since it seems to be pushing that vanilla note and creamy element and really adding to that “French Vanilla ice cream” feeling. I did notice this one seemed quite thick and there were a few areas in my frother that didn’t seem to mix up quite well, but folks who hand-froth “the proper way” (I, admittedly, have still not learned to do it “the proper way” with a bamboo whisk) may not have that issue.

I decided to use my last sachet of this one last night, since it feels like it’s been a long time since I drank any matcha. I used a recipe from Bird & Blend’s website that caught my eye – ice cream and sprinkles! It’s made with 1 cup of coconut milk and 1/2 cup water, heated together, with the addition of 1 tsp maple syrup…and sprinkles!

It tastes amazing! I wasn’t sure how coconut, maple, and the vanilla-heavy matcha would work together as a flavour combination, but they’re unexpectedly complementary. The end result is sweet (of course!), and deliciously creamy, with an undertone of coconut. I wondered whether the coconut would be overpowering, but it actually blends in really well. When the sprinkles melt, they add an extra liquid-sugar kind of sweetness that reminds me a little of ice cream syrup. As a whole, it’s just really, really good. I’d make this again without hesitation, but I’ll need to buy some more Ice Cream Matcha first!

From last weekend; I made a travel mug of this tea iced and then went out for a walk in the Gay Village. I was intending to go out mural hunting, but instead wound up walking through some of the neighborhoods out there (and less the areas with shops/restaurants) and just admiring the architecture of the houses. Absolutely stunning! In particular, I found myself entranced with one specific window – which was just so pleasing to look at, especially surrounded by brick with a tree off to the side.

So, if you live in the Gay Village and this is your house – sorry for lingering and looking at your window for a probably creepy amount of time, as well as then spending an excessive amount of time trying to pose my thermos of tea and get a good photo. That was probably a bit of an invasion of space/property – but that’s what you get for having cool windows. I’m harmless, I swear!