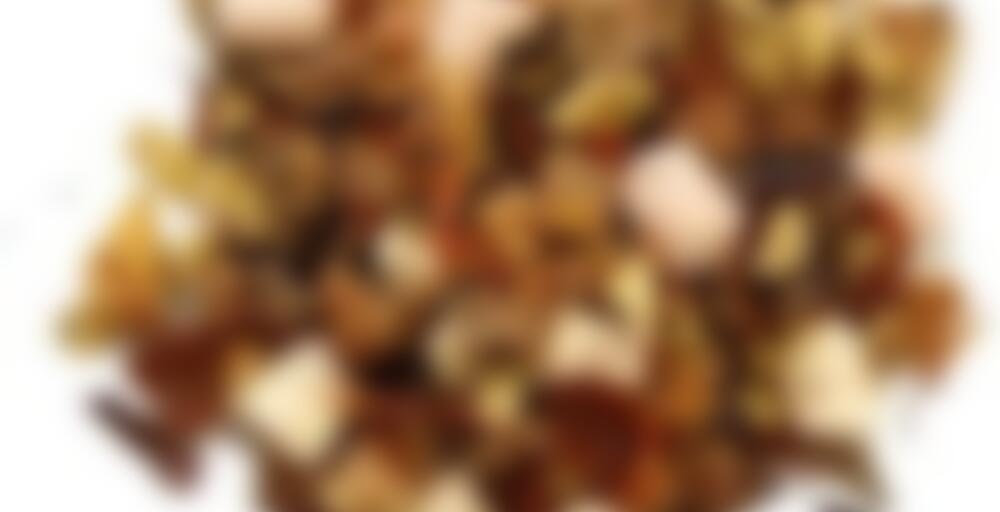 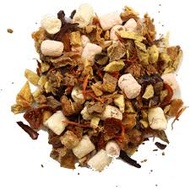 Always looking forward to those sweet candied yams at Thanksgiving? Wish you had an excuse to enjoy ‘em all year round? We hear you! Now you can get into the festive spirit with this Limited Edition holiday tea – it’s Thanksgiving in a cup!

Happy National Lottery Day! Today the prompt is to drink a tea selected entirely by random. I used a rando number generator for my tea inventory spreadsheet, and this was the tea that was selected! (A Limited Thanksgiving tea in July?! Sure, why not…)

I haven’t reviewed this before, which means I probably have not drunk it before, but the top was opened… must’ve given it out in an exchange. It’s quite old now (still in Bluebird Tea Co. packaging) and typically old + opened package mean flavor degradation for me. Hoping for the best, while expecting much less…

Teabag of leaf left in a 350ml cup of 205F water. As it steeps, I’m smelling mostly spice… a “red hot sweet cinnamon” aroma, and nutmeg. Later in the steep, more orange comes forward on the nose, smelling like a typical orange spice profile.

Hmm… I’m not really getting anything from this that makes me think of Candied Yams… I’m getting an herbal Orange Spice tea. A nicely juicy and pithy orange, with a hit of sweet cinnamon (thankfully it doesn’t go “red hot candy” on the flavor) and nutmeg. The orange has a nice bit of tanginess to it, but beneath the orange the tea is a much sweeter apple.

This is fine, but not Candied Yams. My idea of a candied yam profile would be a very natural yam-forward tasting Chinese black base, sweetened up with honey and marshmallow notes. I think “Orange Glaze” would’ve been a more accurate name for this one.

(Yep, I remember you sent some over to me which I’m still thankful for!)

Now I’ve become all curmudgeony and if someone requests tea from a package I still have sealed, I say nup… for this very reason, hahaha. One day I hope to be at a place where I am actually opening and drinking tea not long after I receive it. Two years worth of bad ordering habits created a big world of hurt!

Understandable! I def wouldn’t have asked about it if I knew you wouldn’t drink it for so long. :D

I totally understand, Mastress Alita! I only offer people teas I have open/intend to open super soon for this reason!

This one is also from Mastress Alita. Boy, I was so excited to try this one that I drank most of it when it was too hot to really be able to taste the complexities. Now that it’s cooled a bit and I’m concentrating on the flavors, I can say that the yam flavor is clear, a bit savory, and so fun. I added some whipped cream on top, and that just makes it perfect. It smells and tastes like sweet potato pie! I haven’t tried candied yams before, but I imagine they’re pretty similar? Anyway, I rarely drink a cup of tea as quickly as I’ve finished off this one, so that’s definitely a compliment to this tea.

This was a sample that Bluebird kindly sent with the Boxing Day order I just had to make. It looks like all of the teas on sale are now completely gone from their website! Sad sad. I’m glad I was able to nab a few teas I really wanted to try. This sounds like a fantastic blend of candied yams ingredients…. even some pumpkin, but upon opening the pouch I mostly find the scent of orange. I’m not sure if the recipe usually has orange in candied yams? I’ve always loved the concept of candied yams but never had them (only plain yams – still delicious). The inclusion of rosehip and hibiscus scared me before steeping but the bright orange cup promised no deep red tartness. Bluebird usually keeps the tart tame. There was at least one marshmallow in my infuser, so I was finding a tiny bit of that in the flavor. But definitely a starchy pumpkin quality too. With possibly a hint of spices. And of course some orange. Maybe my proportions of ingredients was a little off in the infuser and doesn’t usually have so much orange? A lovely idea for a blend but this one could use a little work to make it even more delicious (a little too much orange). …but then as the cup cooled it was even tastier, and the second steep the next night had me missing this tea already. There is still some on Bluebird’s site for a limited time if anyone wants to give it a try. And if you go for the 150 grams, I’ll buy some from you!
Steep #1 // 1 2/3 teaspoons for a full mug// just boiled // 5 minute steep
Steep #2 // just boiled for half a mug // many many minutes

This tea sounds amazing… any time I hear the work “pumpkin” I perk up, hahaha!

often orange juice is added to candied yams for flavor.

Thanks for the info, Lexie Aleah, I figured it would be something like that. Bluebird wouldn’t throw orange in for no reason. I was just too lazy to look up recipes. :D

Mastress Alita – there definitely aren’t enough actual pumpkin teas out there! It’s such a big and cheap ingredient, I’d think one pumpkin would go FAR in tea ingredients.