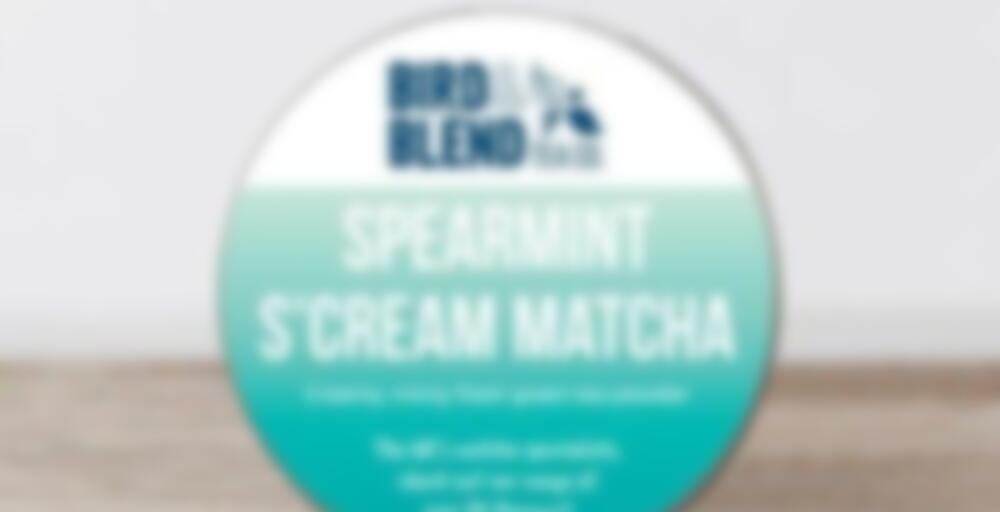 Finishing off this mini tin as a plain iced matcha.

It’s not bad, but the mint and herbal notes from the nettle really dominate. I’m not sure I would know this is matcha if I was told.

It’s not bad, but it ends up tasting more like a peppermint-spearmint blend herbal tisane than matcha. And I don’t detect any creaminess as the name would suggest…

Last time I had this as an iced latte, and would definitely recommend that preparation if you want a creamier mint taste. But it’s still quite refreshing iced! I added a squeeze of honey and it’s giving me Moroccan Mint vibes.

sample from VariaTEA. I’m hoping to get through all of them by the time we get to the end of December. I’m made some good progress but home and nugget doesn’t lend itself to getting to samples often since i try to take time to pay attention to them. I’ve been off matcha lately AND mint..so this one was hard to get around to trying. But i did…and it’s too much haha. I can see how some would like this, but it’s not for me…though it’s better than if it was peppermint, as at least the spearmint is a different than usual mint. thanks variatea!

Another night, another smoothie matcha! And the name for this one seemed so seasonly appropriate, heh.

I whisked this one in water instead of milk, and this is the first B&B matcha-matcha that I had texture problems with (now I wish I had used milk… maybe the separation/texture problems wouldn’t have been so bad? Usually I do make them as lattes, but I only have vanilla oat milk at the moment and just didn’t think that would suit a spearmint drink…). No matter how much I whisked, it just kept coming up with that grittiness I find most unpleasant. But the flavor was great! Very spearmint forward, with a vegetal note that edges a little more herbaceous than the “typical” matcha vegetal flavor. It’s very subtle though, because the mint is strong! I sampled the drink at least ten minutes ago and am still feeling that cooling menthol minty aftertaste on the back of my throat.

As per usual, after initial taste-testing the cup o’ matcha went into the blender for caffeinated morning smoothie goodness tomorrow morning. I decided to go with a “mojito” vibe so I added mango and lime juice. Initial sample before going in the fridge? Pleasantly tart citrus and the mint is still holding strong! Nailed it. I’ll definitely be looking forward to that one in the morning!

Used my chawan for the first time with this matcha. It didn’t froth but it was still nice: https://www.instagram.com/p/B-fJuNpghI_/?igshid=1af66mlle5upn.

Thank you Roswell Strange for sharing this. It made for a nice minty treat. It is a whole lot of spearmint flavour while still being smooth. So it was quite nice despite the lack of froth.

Also bit and picked up a tin of this matcha during Bird & Blend’s free international shipping promo. There were actually a lot of their matchas that I wanted to try, but they’re pretty expensive and I hadn’t budgeted for that unexpected tea order so I restrained myself and only picked up the one that I was the most curious about.

I’ve had my fair share of mint matchas now, and I’ve never really been wowed by any of them. I think the mint matcha from 3 Leaf Tea stands out as the most enjoyable one in my mind, but that one still wasn’t nice enough to make me really want to go out and purchase it. However, a spearmint matcha sounded really interesting to me: only thing better, in my mind, would be a wintergreen matcha which I know Red Leaf Tea used to carry but I don’t think it’s a flavour they stock anymore.

There are a few other ingredients blended into this, like nettle and tulsi – so I was a bit worried they’d affect the flavour and texture of the matcha a lot. Unfortunately, I think Bird & Blend matcha has a lot of texture issues (being gritty/mealy) which is a shame because they generally REALLY nail the flavour aspect.

I actually split my first cup of this with a coworker because she’s obsessed with just about anything that has nettle in it and she was so fascinated by the idea of a matcha with blended up nettle.

So, a few observations about this matcha just from that initial tasting:

1. It’s less sweet and creamy than I anticipated based on the name
2. And more herbaceous in general than the marketing/copywriting seems to imply
3. No texture issues!!

However, despite the fact this is very much a herb forward mint with supporting herbaceous elements from the nettle/tulsi (the tulsi is actually surprisingly flavour forward) and less a creamy mint I still thought it was very nice! I don’t think this is the rich/sweet mint I was envisioning for lattes, but more of a relaxing and therapeutic/stress relieving kind of mint.

I was into it, even though it was very different than what I expected.