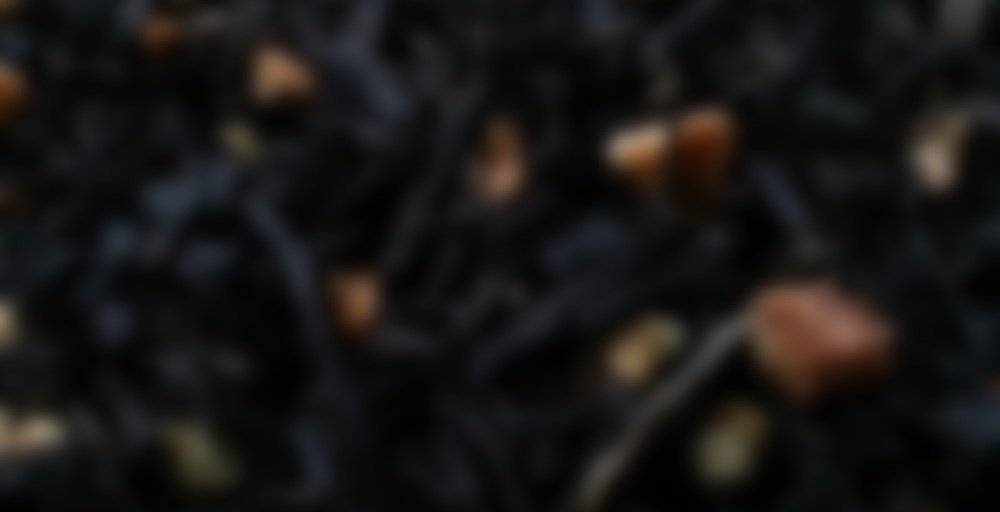 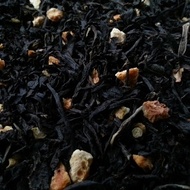 by Butiki Teas
78
You

Our Marmalade & Pistachio Toffee has a sweet orange jammy flavor with a pistachio finish. Powdered sugar notes are also present as well as some steamed vegetable notes which complement the sweetness and help it from becoming cloyingly sweet. The marmalade and pistachio flavors pop with a little bit of sugar.

Drank with sugar, I am getting super intense marmalade this time around. Just as tasty as it was 2 years ago, only a little bit lighter. This could definitely be from underleafing, though – I had slightly less than a full spoon of leaf left and I didn’t feel like compromising on a smaller mug. The orange note intensified as the cup cools. I bet this would have been good iced.

I don’t know what marmalade is, nor have I Google’d it yet (because that is how my generation ,if not the world, does to find out information)

I was confused as I saw this in the TTB… I looked at it and said to myself, “who the heck puts a black tea in a green TTB?”
That is to say, this is by far the darkest green tea I have ever laid eyes on. I brewed this up and drank it down quick to get up and rebrew it; meaning I really like it.

Oh, man. I forgot to log this and I finished it weeks ago! Erm, memories.. all alone in the moonlight..ugh.

The marmalade was the most prevalent fixture, and if I over steeped or over-leafed it the bitter citrus-tang became the main (and only) feature. The pistachio was smooth, subtle, but distinct and I enjoyed picking up on it. Toffee wasn’t always a thing, but when it was it was awesome, if a tad light.

I loved the purple base; it’s a particularly dynamic “resteeper” and complimented the marmalade well. It will be missed!

yes… this one was delicious :(

Just as I was starting to love it I ran out! It was one neat tea xD

I’m glad Stacy liked my idea and made this one up. It was really tasty.

The first time I had this I wasn’t loving it, something about the flavour combo struck me as odd.

BUT, I’ve since had it again and resteeped, and reached the conclusion that I LOVE it. I should add that it makes sense for me to love it, because I’m a huge marmalade freak. My husband makes fun of me because whenever we go out for breakfast I steal marmalade packets, haha. He says that’s one of my ‘old lady traits’. As if no one under the age of 60 likes marmalade!? PFFT.

I don’t eat much toast at home, otherwise I’d likely have a fridge full of different marmalade brands.

Anyway, the flavour combo is just perfect. Nutty and sweet from the toffee and orangey but not in a fake or overwhelming way.

HELLO OUT THERE! IF YOU HAVE THIS AND HATE IT, SWAP WITH ME! :)

NOOOOOOOOOOOO if you have it, give it to MEEEEEEEE

(I steal marmalade packets too…)

My favourite marmalade is actually a lemon one :) It’s super expensive and in the natural source section of the store I work in, so I really stretch it out to make it last :p

After shoveling some more this morning (will this ever end!?!?!), I decided to go for this one… the scent of the marmalade in the bag was so inviting!
I’m not a huge orange flavouring person, but this tea is absolutely perfect. The marmalade is so natural and real, and the pistachio notes are simply lovely. I adore the base for this, finding it to go so well with the flavour profile.
This tea is another example of why I love Stacy’s teas so much… it completely succeeds in delivering the flavours of its name, while avoiding any artificial feeling.
So very delicious! (now I’m going to go hide under a blanket with my book, while I sip the second steep of this…. :) )

Stacy was sweet enough to include 1/2 an ounce of this tea as a bonus with my recent order. This particular flavor combination isn’t something I’d normally be drawn to, but I gave it a try yesterday afternoon. The flavor is definitely true to the name! The primary note is sweet orange zest, which really does remind me of orange marmalade. This is backed by the nutty pistachio flavor and just a hint of the vegetal green base. At 2 minutes, I wasn’t getting any bitterness or astringency. Personally, this wasn’t my favorite, but I can see a marmalade-lover really enjoying it!

I should probably try this tea again before I review it, but ah well.

I was not to impressed with the flavor combinations or the base tea chosen for this blend. I feel like if just one thing was swapped out, it would make for a better cup. I had not tried the Kenyan Purple Green tea before this, and uh… I may be more careful about it next time.

I don’t know if it was because I hadn’t eaten since that afternoon before, or if I was just feeling under the weather, or what. But about an hour after I had drank the tea an began to start my day, I began to trip balls.
Now I have heard of being ‘high off tea’ before, and had felt the most minor of effects on certain puerhs and oolongs before. But nothing really as strong as that. i have had all of those flavorings in some way or another before, so I ruled that out. But the closest thing I could describe it to is a marijuana high, minus the munchies. It’s started by me getting a little dizzy. I realized I hadn’t eaten, so I grabbed a quick bite for breakfast. Nope. Still tripping. Hmm. No one else has experienced this while drinking this tea. What the hell?

So, long story short, I would put this up for auction on the swap thread, but I don’t know if I want members of the steepster community ousting me because I made them trip genitals off of this tea. heh.

bwahahaha see i liked this one..as far as an orange tea goes it was tasty :) and i don’t usually like non black teas

Will have to try this one again as it seems to be a bit oversteeped/overleafed (I should have looked up the base before brewing). I can definitely taste both the orange (like in Two Friends! Which I also drank today…) and the grapefruit, as well as a distinct nuttiness, which is either from the base or the pistachio (likely the latter). The toffee flavouring isn’t too obvious – I think it may just serve to soften the other flavours and meld them together a bit, instead of making the tea sweet. I’m not super sold on this tea though, in part because there’s a fair bit of astringency in this cup, and secondly, because I’m just not sure I need more citrusy tea right now (I also had the second infusion of Grapefruit Creme Brûlée tonight). It’s certainly both tasty and unique though, so I’ll give it one more try before it may relocate to Toronto.

I’m with you on that.

Farewell tea! i loved you well…if anyone has more they don’t want and are up for a trade, let me know. Something about the orange in this one just makes me happy. :) Glad i got the chance to try this one out even if it’s not overly toffee like for me :)

YAY! My tea arrived today! Boo that it is my last. So sad. Anyway, as I try to minimize how much caffeine I have after work. I often try to have no caffeine, but if I do have any, I try to have a low caffeine tea instead. Soooo…as this is a green base, and the rest I got are oolong and black, this was a natural choice. Plus this tea was based on my flavour combination suggestion, so yippee! And I’m the first to review it.

So, I kinda went to default 3 minute steep, and realized after that it should have been a 2 minute steep. Whoops! I still got a very flavourful orange tea, with a hint of sweetness, and a little something at the end, which I can imagine is the pistachio. I admit that the orange is quite dominating in this blend, at least at the 3 minute steep, so I could not pick up the base as well. Either that, or it just blends in to everything. On my second steep, there is a little more base coming through.

I did add just a touch of organic cane sugar, to amp up the sweetness of this tea, which I think it does well. Part of me thinks the tea should be thicker, but that is my brain thinking of actual marmalade, rather than a beverage that resembles it.

Overall, it is quite nice, and nicer than the Orange Oolong from Bulk Barn I have had, plus one of the similar ones from Della Terra…those seem quite artificial by contrast. I think that this is one that I may save some for cold steeping, or icing over the summer. Part of me wants to ice latte this with sweetened condensed milk.

I’m checking the yes recommendation box, because even though Butiki is closed, sadly, I hope that others will still try this with swaps and trades, if available.

I tried to get some of this, but it was all gone by the time I got my browser working. Glad to know it’s tasty. :)

I got a half ounce, so I’m sure I could set some aside if you wanted. I can send it to you with the caramel hojicha.

Haha. It’s fine. I have an order coming through Sil, so even though I might not have this one, I know I have others. I think I have others.

I so badly wanted some of this one, but I just couldn’t swing the budget :/