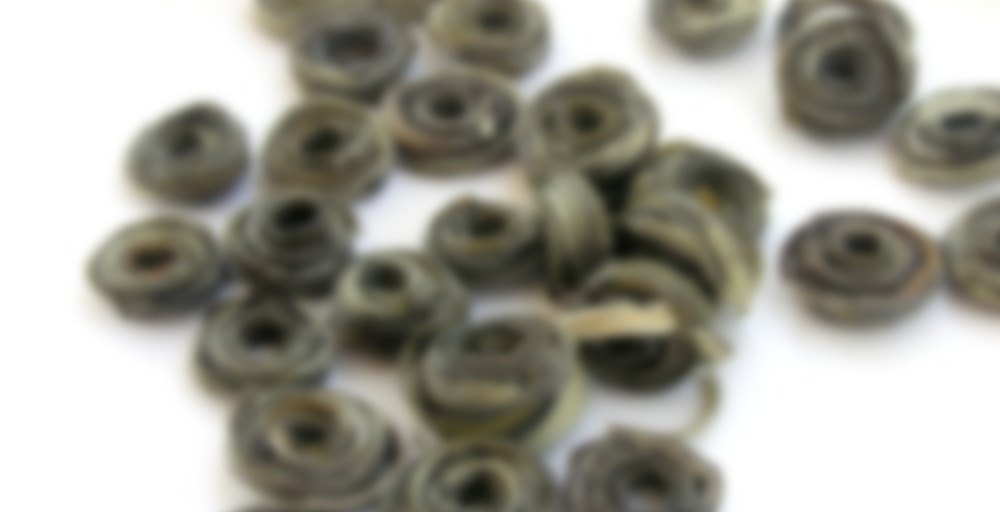 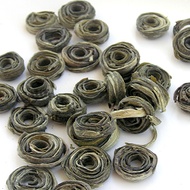 by California Tea House
76
You

Daughter Ring is another California Tea House private stock. A wonderful green tea from the Yunnan provence of China. Individual buds are hand selected from the ‘Yunan’ tea plant variety and carefully hand-rolled into a lovely ring appearance. Daughter ring has a smooth, fresh taste and high aroma.

The leaves on this are really pretty.. the little rings are CUTE. However, I’m having a touch of an issue getting it to brew right. The steeping instructions on the site say 6-8 rings per cup with water “a little under boiling”.

Which sounded a little off, so I used that amount, and water at 175. That brew was almost clear and fairly flavorless. So, I’m off to try it at like a 190. We’ll see how that works.

I want to try this just to see the rings!

Wonder what tiny-size the curling iron is for these little leaves :)

I think Steepster is making me sensitive to buzz words. There are certain words that I will never be able to bring myself to use again as the sight of them gives me tics… I just came across a bit of text that combined some of my most hated ones. Ick!

Brand new tea to the rescue! Just one of very many situations where writing a Steepster post totally helps. (In this case it helps by proving to myself and others that the above can easily be avoided)

Anyway, this one was part of my recent gift from Wombatgirl and one that she has had some trouble getting anything useful out of. Apparently the problem was that it simply refused to have any sort of strength or flavour at all.

For one thing I customarily use more than average leaf and shorter than average steeping times, so I counted out ten rings for my one-cup-pot and gave it the usual minute. Secondly ‘a little under boiling water’ is not something I feel comfortable about pouring on a green tea. That’s what I use for most blacks. (Experience have taught me that not quite boiling water brings out the best in some of my favourites) So I wated a little longer before pouring the water into the pot, like I would with any other green tea.

What I got out of this is a very pale cup, but not completely colourless. At first it was sort a slightly orange-y yellow tint to the water, but having stood and developed a bit it’s turning more orange.

The aroma of it is rather like the colour. Pale. Mostly it smells like steam, but as with the colour it comes out more after the cup has rested for a moment. I have to say my immediate thought was pu-erh. It has that same kind of livestock quality to it, but obviously it’s otherwise not even remotely like pu-erh. It’s got a sweetish note and something sort of straw-ish, which doesn’t surprise me, considering this is a Yunnan tea.

I’ll have to experiment some more with this, I think. At the moment I can’t give it any points, because apart from warm water, I haven’t a clue what it tastes like.

What buzz words should I avoid? :)

It’s mostly people who consequently use abbriviations instead of writing a word. Some people do this for as many words as they possibly can and it makes for really jarring reading. That, and the tendency to replace all -ty endings with -tea, which is neither cute nor clever. Both are things that just makes me wish people would learn to spell really simple words.

(a) Pitfall of a texting culture—everythg abbrev. I am so thankful for a teenager who spells everything out…correctly!
(b) Pitfall of frequent tea drinkers, which I find myself falling into as well.

In other words, I’m getting old and curmudgeonly. :p Nothing new there. :p

This is an amazing green tea that is not well known. I love adding a new tea to the collection!