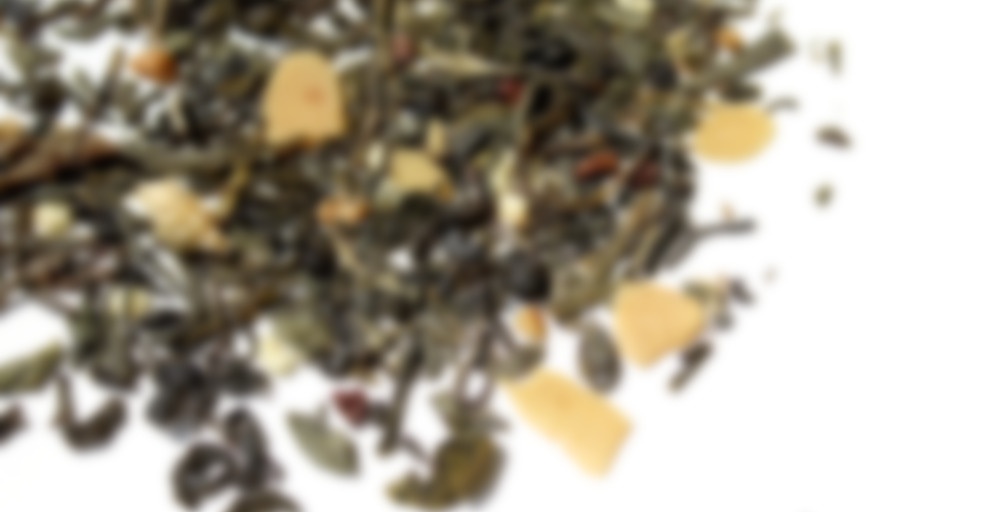 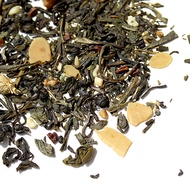 by California Tea House
78
You

Take a stroll down the sexy cobble streets of an Italian hillside village with this smooth and sensual blend. Pistachio Gelato starts with a superior grade green tea and tosses it with Roman chamomile, pistachios, cracknel bits, almonds, macadamia nuts and tops it off with soft chocolate pieces and cocoa kernels.

Yum!
I still had a lot of this from one of my first swaps way back when with Dinosara! And so – I made a small pot of it.

It has a hint of chocolate taste to it surprisingly – and I definitely get pistachio! There’s a hint of bitterness, even though I only used 160 degree water – but it’s very tasty. I’ll probably make the rest into iced tea so we’ll see how it fares then!

So this is the fate of a tea that has been with me at least 10 months, simply because I was saving it for an occasion. I went geocaching, that’s occasion enough! haha

Dinosara was so nice in sending this one along with a bunch of other nice teas! (It was so thoughtful that you remembered I was looking for this one.. I’m not sure how you did! thanks so much!) I had been checking their site (californiateahouse.com) to order some for months, but they have only been selling it in four ounce packages. I certainly don’t need that much of one tea if I have so many other teas. I was initially interested because someone told be this one was similar to my beloved but extinct SpecialTeas Vienna Winter Green (I had to look though my messages to see who told be about it and it was Mercuryhime — thank you!) So I’m so happy to be able to try this one and see if it is the same!

…And it does seem the same! I asked someone at CTH if it was the same blend and they said “not quite” but this seems pretty close to me. It has all the same ingredients… and man is it a rare list. The steep color is a buttery yellow, just like the flavor. This one really can’t be steeped over two minutes or it will get bitter. Definitely my favorite green tea with such a great mix of toasty, nutty flavors. It is so nice to find a replacement for the SpecialTeas blend! I wonder if their other blends are the same or similar? Hopefully this one will still be there when I need more… and I might even get the four ounces.

I will never stop being amazed at the kindness and generosity of Steepsters! It is very appreciated!

Yay, so glad it lived up to your expectations!

Yep, that’s because I’m pretty sure it’s the same blend. :D thanks again!

I’m glad my recommendation worked out for you! I always thought that CTH was supplied by Specialteas. I wonder where they get tenor stuff now.

Their, not tenor. Ugh. Autocorrect.

I was just about to steep up a second cup now, before I saw your comment. :D thanks again!

I had an Earl Grey this morning and a fruity oolong earlier this afternoon, so I decided to go with a nutty green now. Apparently I haven’t been back to try this one since my original hot steep (and a not-so-successful cold steep) when I thought it was a little weak on a 2 minute steep. I do tend to forget about teas sometimes…

Anyway, the three minute steep seems to have brought out more flavor, and it didn’t over cook the green tea. It’s an interesting combo of flavors, definitely that pistachio ice cream flavor with chocolate that actually almost reminds me of spumoni ice cream with out the strawberry (never my favorite part anyway). Pretty tasty, though the mouthfeel is a little drying. I think this is a tea that would be delicious sweetened to amp up the flavors that feel like they should be sweet.

it sounds good in theory!

It’s decently good in practice as well. Butiki teas has a pistachio ice cream green that I want to try.

I was super excited to try this tea when I came across it in the Traveling Tea Box. The dry leaves smell sweet and nutty with a small hint of chocolate. The tea itself smells more like fresh green tea with some nuttiness. The flavor is buttery green tea with a strong nutty taste. The aftertaste is slightly bitter with a hint of cocoa, with a nice toastiness to it. Sweetener definitely brings out more of the chocolate, which makes it so much better in my opinion. I’m glad I got to try this one, but I doubt that I will ever purchase any.

The little foster kitty came running and sniffed my tea again. I don’t think she cared for this tea either, since she put her tail up and sashayed off!

-Dry blend has medium green tea leaves and twigs with slices of nuts and white blossoms.
-Dry leaves smell sweet and nutty with a small hint of chocolate. Tea liquor aroma is of fresh green tea with a hint of nuttiness.
-Tea liquor is a cloudy medium yellow color with an oily sheen on top.
-Buttery green tea and strong nutty flavor and finish. Slightly bitter and toasty aftertaste with a hint of cocoa.
-Best with sweetener.
-Good tea. Fresh green tea and nutty flavor with a trace of bitterness.

This tea is smooth, not vegetal, buttery, and slightly nutty…

I also wanted to add this is a great flavored tea…

And this is same or similar to SpecialTeas Vienna Winter Green…

Yummy, yummy. Of all the teas I have ordered from California Tea House I have enjoyed this and Monkey Paw the best. I have one more to try still so that may change. Nevertheless, this is a delicious blend. Nutty and smooth and slightly sweet.

Perfect pick me up in the morning, with a mild hint of pistachio.

Why did you stop selling this one, California Tea House? Why? Would you care to tell me your source for this tea?