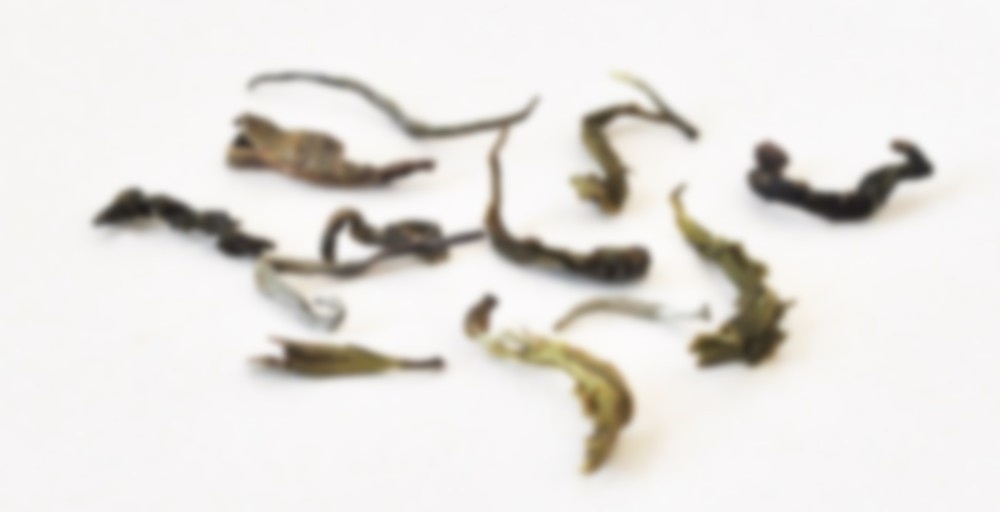 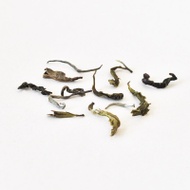 Green Darjeeling tea is a rare and delightful treat.. This one from the Arya estate in Darjeeling is delicious and rivals many of the best Chinese green teas.

The leaves are small and delicate; a mix of gold and sea green leaves with small downy buds that respond well to a cooler brewing temperature and shorter steeping time. Once brewed, the clean light liquor gives off a wonderfully floral and fruity aroma. The taste evokes plump, juicy fruits: a subtle pear and grape note that lingers long on the palate.

My first ever green darjeeling, and boy this tea is good stuff!

I’m comparing this tea to a yellow gold, or any other green oolong tea. I know its a green tea, but the creaminess and freshness from these curled leafs are wonderful.

Sweet, light citrus in taste and a bit creamy… one off the best green tea’s i drank in recent times. Have to say that u can easily get 3 and if you brew long enough even a 4th cup out off one teaspoon of leafs.

I used a 2m15 sec brew time for my first cup, upping the brew time with 1min for each cup after that. The color of this brewed tea is a light green that gets a bit intenser in color after more cups and longer steep time. Only downside was that this tea is on the expensive side… but i had some luck i ordered this with canton’s sale a while back and i’m happy i had the opportunity to afford it.

Oh, btw i used a 70°c water temperature for all brews. Like recommended on the packing info.

I recently gained some tea cash from Verdant, which was due to expire at the end of January. I then received an email from Verdant saying they had some Puerh cakes that were reduced because the wrappers were damaged. It was a sheng puerh that I’ve had on my wishlist for a while, so I thought I’d take advantage of this double-discount situation and order myself one!

Fearful that I wouldn’t really be able to keep it clean with the wrapper all torn/ripped, I popped along to Canton’s website, recalling that they had some lovely cotton bags in which to keep puerh cakes. Given it was only a couple of pounds, and I had a free-shipping code, I thought I’d buy it, along with a lovely little puerh pick. Whilst ordering, I got a small sheng puerh (which I plan to break into tomorrow or Monday) and a number of little samples, including two (at only £1 each!) of the Summer 2014 harvest of this Darjeeling.

Well, I confess – I’m a little disappointed by this tea. Opening the bag, the leaves didn’t smell like much. And, when brewed in my little glass teapot (my usual preference for brewing greens, and it certainly worked like a charm for Canton’s Gua Pian and for Verdant’s Dragonwell), it produced a pretty lacklustre infusion :\ I tried increasing the steeping time, for the second infusion, and the temperature for the third, but it didn’t do much to it.

I’m gonna give it the benefit of the doubt and try the second little sample I have. I think, though, that I’ll try it in my Gaiwan next time. Withholding my judgement for now :P

What temperature did you brew it at? When I tried this one yonks back, well, three years actually, I found it best brewed at about 60 degrees C for about a minute and a half.

If I had to estimate (and it would only be an estimate), somewhere between 70 and 80 degrees – the way I did it normally works OK, given the shortness of steep, but clearly I mucked it up with this one.

It does seem like a pretty delicate tea, so perhaps I should try that. I’ll dig out a thermometer too – I’m pretty sure we have a clean sugar-thermometer in the kitchen that would do OK. Any tips on quantities/brewing method? :-)

There are advantages to having a variable temperature kettle. :) I used to use a milk thermometer and that worked well enough, but the kettle is more convenient. I went back to my old tasting note here: http://steepster.com/Roughage/posts/99405
The tea was made with 1 heaped tsp in a 250ml glass pot (from Canton Tea Co) at 60 degrees and steep time of 1m 30s.

I’ve had a couple of really finicky Darjeelings, but I have generally found that experimentation works out in the end. I do wonder what I would make of the Arya teas now that I have another three years of tasting teas under my belt. I bet my descriptions would be quite different.

I have just remembered the other thing I do. Water in our area is well ’ard, like rock, so I always use filtered water. You would be surprised how much difference it makes.

Heh, thanks :D I have a similar glass pot (it’s probably closer to 200 ml, but that’s OK) and should be able to use a thermometer to get the temp right! I do always used filtered water, too – I’m not sure I’d be able to cope, in general, without my filter jug hahaha.

(I do really want a variable temp kettle! That gooseneck one that CTC used to sell – I think it’s a Bellevita one – looks amazing. If I get a full-time job, I’ll deffo save up to treat myself to one :-) )

My kettle is a Cuisinart one that I bought about the same time as that Arya Emerald tasting note. Irritatingly it only goes in 5 degree increments from 85 degrees. When I bought it, the rep from Cuisinart was in the shop explaining it to the staff, so I berated him for his product not being perfect!

The Bonavita kettle looks much better with the temperature settings from 60 degrees and up. It’s on Amazon if you have the money for it. I’m sorely tempted but need a full-time job too, before I get to splurge on tea stuff again.

Oops, posting before checking properly. Although the temperature settings on the Cuisinart kettle are irritating, it does have the temperature guage on the handle, so it is possible to get whatever temperature you want by standing over the kettle and stopping it at the right time.

Bonavita – that’s the one!! Yeah, I’ve seen it on Amazon, which is most likely where I’ll buy it from – I deffo need the money before I go for it… It’ll probably be my “first pay treat” or whatever hahaha :-)

The one you have does sound perfectly practical, though – I imagine it’s a little less costly, too! I only leant towards the Bonavita one because of the exact T control (which has been well reviewed by most people) and because of the gooseneck, which suits me as I’m usually brewing in a Gaiwan or very small pot, so being able to control the water flow would be pretty handy.

Yes, that sounds about right. Aesthetically, I am not sure about the gooseneck but practically-speaking it works. When I bought my kettle there was not as much choice as there is now.