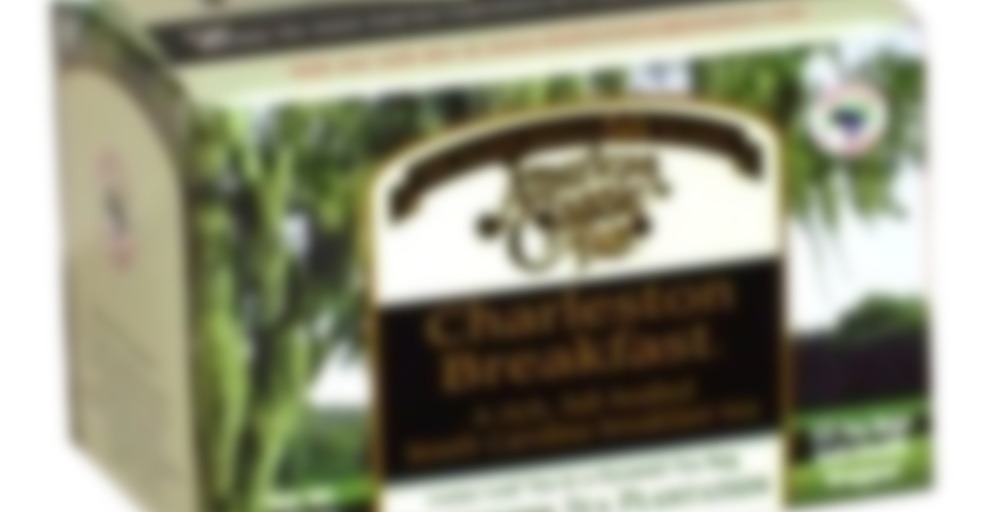 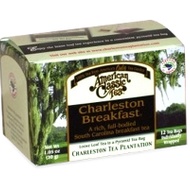 by Charleston Tea Plantation
70
You

Charleston Breakfast tea is grown on the Charleston Tea Plantation in the Lowcountry near historic Charleston, South Carolina. It is only here that direct descendants of heirloom tea bushes, brought from China and India over 100 years ago, have been lovingly cultivated to make this tea. Enjoy rich and flavorful Charleston Breakfast Tea.

I have had a bunch of different teas from the Charleston Tea Plantation sitting in a drawer, and with the exception of Plantation Peach – which was YUMMY! especially iced – I have failed to taste them! Gmathis inspired me this morning. When I saw her review of this tea, I thought, “Hey, I have that!”

I used two sachets in an 18 ounce Stump pot and steeped for three minutes. The liquor was orange/ amber. There is a light sweet potato scent that intensifies when your kid adds a bucket of sugar to her cup! As is my habit, I took it plain first because it was my first time drinking it, and it was a smooth enough cup of tea to be taken without milk. There is a slight hint of breakfast tea bite that would probably be stronger if you want it just by adding more tea or increasing your steep time. Not bad, and it comes from an island just a few hours drive from me that I still haven’t managed to visit!

I tried it next with a bit of sugar, and I thought it odd that sugar increased the sense of bite. If you like an Assam to kick your butt into gear, you would like that! Next I added a splash of milk to smooth that bite. It was a decent cup of tea that way as well.

Overall, I think I liked it best absolutely plain. My daughters were not wild about it, but they add LOTS of sugar and milk to most of their teas so they tend to like things with more Assam in them.

You’re a lot more poetic than I was this morning, but it’s definitely a good stand-alone sippin’ tea! Charleston Tea Plantation is on my bucket list, too.

It’s definitely worth a visit! It’s the only tea plantation in the continental US, and the drive out onto the island is beautiful thanks to the marshland and hanging moss.

But tea is grown in Washington State too! Who would have thought! (There is Hawaii but not in the continental U.S.)

@Bonnie I didn’t know that about Washington – thanks!

I’m not that smart…my Aunt and Uncle live in Skagit Valley where the farm is! Sakuma Bros.Farms has White, Oolong and Green that they grow there. The area grows lots and lots of bulbs (tulips) and ships them to Holland. When in bloom people come from all over to see the flowers (May usually I think). I was going to move there but too much rain!

Looks like I liked this when I had my first sample about a year ago; I’m liking it even better this morning. It has some dark and just-barely sweet cocoa personality that’s kin to super-fine estate teas from outside the U.S.

All the Charleston Plantation teas I’ve tried have rated a pretty good or better, but at least for this morning, this is nearing superlative.

I was in Charleston, South Carolina, last week and just couldn’t resist picking up some loose leaf tea grown on the Charleston Tea Plantation, the only tea plantation in the United States. The Charleston Breakfast Tea variety brewed for four minutes, resulting in a vibrant amber color. The flavor is pleasant, although not multi-dimensional or particularly bold. The taste is slightly nutty but lacks sweetness that my worn tastebuds are able to detect. All-in-all, this is a kind and gentle breakfast tea that will softly stir you from your slumber.

I wasn’t a big fan of it,but reading this review makes it sound insatiable for the morning;so i’ll give it another try. Thanks. :)

Yes, give it a try. You won’t be sorry! Thanks for your comment!

I heard about the Sakuma Brothers several months ago. It is a fairly recent tea venture. I believe they are calling themselves a “farm” and haven’t reached “plantation” status yet. However, they are tea growers nevertheless. Thanks for keeping me straight!

Very cool, Kashyap! Please send me the link to your website. I’d love to take a look at it!

Well, this feels like sacrilege. A tea grown in the U.S. of A.? And from the south? Well I suppose the climate is good enough for rice. Well how does it taste? I would say it’s a bit mild, hints of nuttiness like almond. It doesn’t have much of its own sweetness. It’s okay. Nothing special, but worth giving a few more tries (since it was a gift) I’d be interested in buying whole leaf and trying it loose someday.

It’s certainly better than any number of bagged teas though.

I put milk and sugar in it.

Their American Classic is a better-than-averaged “stock” bagged tea. I do like the notion of a homegrown American tea.

Be sure to check out all the teas offered from the Charleston Tea Plantation, from the original American Classic to our loose teas.
http://www.bigelowtea.com/Catalog/Category/36/98/American+Classic+Tea.aspx

Kathy from Bigelow – Thank you very much for the offer, I don’t know why I didn’t see this earlier. I will definitely take you up on the offer, especially the loose tea.

Backlogging.I got this from Erin thank you very much. This was really good. A good medium strength black tea and smelled really good and tasted good. And I added some sugar.

Received this tea yesterday from Bigelow. This is MUCH better than the Classic. Brews fast so give it a two-minute steep with near-boiled water or even three minutes if you like your tea with a more bold flavour. I still prefer the Ceylon blends, but this tea is definitely something with which I’ll experiment. I ripped a bag open and the leaf is a nice size which explains why it infuses so well. A very pleasant brew. It’s nice to know that they are paying attention to tea in the Lower 48!

*Addendum: I just blended it with a bag of Bigelow Premium Ceylon in a ten-ounce mug for three minutes and it was excellent!

My roommate didn’t like this tea too well, so I got to have the last bag for my morning cup. Big tumbler, hot water spicket, brewed strong, with milk. A good way to start the morning.

Hmmmm mixed feelings about this tea. First off, the leaves are that awkward size where they would be fairly large for a tea bag, but not really significant enough to be loose leaf. The smell is beautiful and fresh, nothing really specific about the smell, just wonderfully fresh smelling tea.

I seeped the first brew about 1.5 minutes, it was a bright amber color, not as dark as I was expecting. The smell after brewing is….odd. Kind of a dull sourness, there is no bite to the sourness, just unpleasant. Luckily that smell didn’t correspond to the taste. It’s a very light tasting black, not really what I would expect from a ‘breakfast’ tea. Not much astringency at all, though I noticed a tiny bit of dryness. Pretty basic tea for me, but I also like basic teas. I think I would probably spend the money to get a bunch of Lipton or red rose bags rather than this next time though.

Not bad, just nothing extraordinary enough to invest in more of. I hear that their flavored teas are yummier, i should try those

This is a semi-regular breakfast tea for me. It’s a little on the lighter side, not as robust as some of my other choices, but good for a slow. leisurely wake up.

This was a solid black tea I love english breakfast while studying and it has beautiful notes of caramel and dark full-bodied mouthfeel.