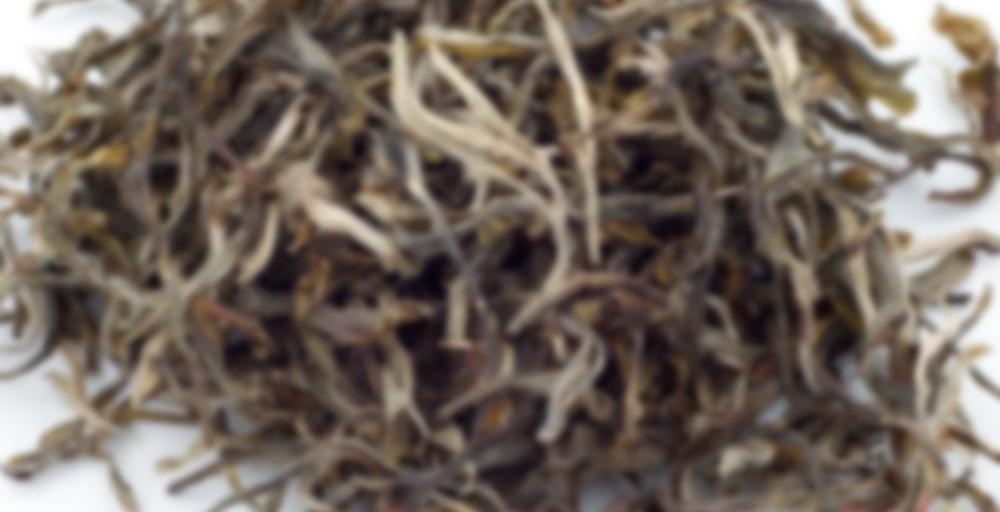 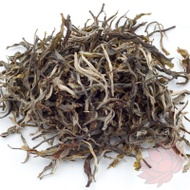 by Crimson Lotus Tea
--
You

We are very excited to offer this tea this year. In the Chinese puerh tea drinking community sheng puerh from Lao Ban Zhang (老班章) is considered the king of puerh. Prices for this tea can reach astronomical levels. This material that we have is a fantastic example of the complexity and beauty that Lao Ban Zhang sheng puerh tea has to offer.

We purchased a single kilo of this rare and amazing tea. We are not going to press this material into cakes. We have divided what we have into single session 8g samples in the hopes that as many people as possible can try this tea. If you want more of this material you can buy multiple samples.

This tea will brew longer than most with a lasting aftertaste. There is a bitterness that washes away with a deep sweetness. The aroma is floral and intoxicating. The flavor is vegetal and refreshing. This is a tea worth experiencing. Drink it with your whole heart. Share your session with others if you can!

This single serving spent a week in my pumidor in a humidity just shy of 70% RH before the session. I believe this was my first time drinking raw pu’er as mao cha. The dry leaves were impressively large. To honor this special tea, I drank it together with my mom using a full set of a fine silver teapot, cha hai and cups. The 120ml size of the teapot was perfect for the eight grams provided, although there was barely enough room to fit all the leaves in and the largest one I had to soak in some warm water to bend it enough to fit it in without breaking it (it was absolutely massive). As for most of my tea reviews, I used bottled spring water for consistency.

I gave the leaves a typical 10s rinse, but since this was such expensive material we of course drank the rinse (might as well call it the first infusion). It was the most sublime rinse I’ve ever drank! White chocolate! Definitely white chocolate. Absolutely stunning. In a league of its own. Far above any other tea I’ve had and this was only the rinse. Rich, divine, euphoric. An overwhelming multi-sensory experience. I could have sworn even the liquor in the cup smelled like white chocolate, but it could have also been the cup itself (warm silver smells like bliss). The wet leaves themselves had a pretty typical greenish scent, with perhaps some creaminess in there, but that could have again been the silver.

At this point I gave the rinsed leaves a customary 10-minute rest before resuming with the brewing. I proceeded to do a total of fifteen more infusions, for 12s, 12s, 15s, 20s, 25s, 35s, 50s, 85s, 2m 15s, 3m 15s, 4m 30s, 6m, 8m, 12m, and 20m respectively according to my mental clock (and later cell phone). The “first” infusion was quite similar to the rinse. Soft, delicate, gentle, maybe a bit floral, with a hint of green perhaps in there somewhere. All in all the rinse was better though. The next infusion was stronger, greener, with some mild astringency. This did not change for the next several steeps. The tea continued to brew out soft, delicate, green, slightly astringent. A pattern I’ve experienced many young raws fall into after the first few initial steeps, before sometimes proceeding into sweetness. Where this tea differed from the others I’ve had was the softness and delicacy to this essentially bad green tea taste, although I’m not sure if this is an attribute of the tea or all the silver used (this was my first time brewing sheng in a silver teapot). I noticed perhaps some very, very mild vegetal sweetness in some infusions as well as a “cleaner” taste in some of the later infusions. For a few steeps I did experiment with some slightly cooler water as I’ve heard some people brew young sheng at below boiling, but it did not have a significant impact on the flavor. The greenness and astringency were perhaps diminished to a very slight degree, but the overall flavor was weaker as well. No real changes in the flavor profile.

It took till the tenth infusion (this was also when I returner back to boiling water) before the greenness and astringency started weakening and the flavor profile shifted back towards the early steeps. The leaves were showing no signs of losing steam at this point. The overall experience became softer like in the beginning and eventually the greenness tapered off completely while the very mild and manageable astringency remained quite constant. One steep produced a mild cooling effect in the mouth as well as a relatively weak but reasonably nice aftertaste. The tea exhibited perhaps some very minor (often vegetal) sweetness in the very late steeps, but not nearly to the degree than many other young shengs. At no point was there any kind of mineral flavor. The very last infusion I did was the only one that felt significantly thick in the mouth. Prior to that only a couple random steeps had displayed some light body to them. For the fifteenth infusion the flavors had taperer off quite significantly and the astringency had shot up for the first time, although it was still manageable. The tea soup also came across as somewhat creamy, but that may have just been the texture. The leaves could have probably gone on for a couple more steeps, but based on the trajectory of this tea I did not expect it to improve from this point onward and I also didn’t have the time and patience to start doing hour-long infusions just to see if what came out would be drinkable or not.

At the end of the session the brewed leaves were a very pale green, massive, and extremely soft and tender. If I’ve ever seen leaves that I could believe were gushu based on looks, these would be them. This being mao cha no doubt helped preserve the integrity of the leaves, but examining the big, stout leaves after brewing does not fail to make an impression.

All in all I’m not sure how I’d rate this session as a whole. The rinse was the absolute highest quality cup of tea I’ve had the privilege of consuming and the longevity of this tea is probably the very best I’ve seen in a raw pu’er, but after the first few initial steepings the flavors became extremely basic and not particularly enjoyable even if they possessed a very soft quality to them. Back when I first started getting into young raw pu’er some nine months ago (still haven’t progressed to aged or semi-aged, although I have a couple samples on the way), the very first sessions I had were very dynamic in terms of flavor and always hit me with very noticeable cha qi. Since the beginning of summer, all the sessions I’ve had have lacked cha qi and have either deteriorated after the initial steeps to the bad green tea taste I experienced in this tea in the mid steeps or started off that way from the very beginning, even teas I’ve drunk before and had totally different experiences with. I don’t know if the summer has something to do with it. Maybe I’ve just gotten lucky with the very first teas I drank and they have since all advanced to an awkward state in their development all at the same time. In any case, what I’m saying is something about the way I’m storing my tea or brewing it might be affecting it negatively, unless the experience I had with this tea falls within expectations. I’ve been avoiding raw pu’er for most of the summer due to the bad experiences I’ve had, but I’ll need to get to sampling more of the teas I have to see if I’ve just had bad luck or if there truly might be an issue. The next sample I receive I’m going to try out right away and then drink again after it has spent some time in my pumidor to compare.

Anyway, the first two cups of this were sublime. If stored correctly, I could see material like this being extremely nice in a decade or two. My own experience leaves me somewhat unsure if I can wholeheartedly recommend purchasing a sample of this to experience a tea of this caliber for yourself, but if you love tea and love pu’er and this isn’t your first rodeo, then consider it an investment into growing your own tea appreciation.

Is Ban Zhang truly the king of pu’er? I dunno, but you can serve me the rinse from this tea any day. Look forward to my next pu’er review hopefully very soon.

Tasted this side by side with Yunnan sourcing 2016 Hai Lang Hao LBZ and not surprisingly got quite tea drunk. While I find most of the LBZ I’ve tried to o be monolithic (in a good way like Lagavulin scotch) this tea had an amazing complexity that evolved in each of twenty some steeps. I’ve also reviewed the HLH here and found it to be like a mighty warrior. Thus far I’ve had 5 LBZ teas and all have a distinctive backbone of this smooth bitterness, camphor and perhaps a bit of cocoa. This tea has this but it’s in the background. While the HLH beats you over the head with these flavors, the Crimson Lotus tea uses them as a subtle backdrop. There are also a myriad of floral, stone fruit, almond and forest floor flavors that I haven’t experienced in an LBZ tea. Had I been given this tea in a blind tasting I’d have a difficult time believing this tea came from one region much less one tree. Yes it does have that LBZ background flavor but it sports jasmine notes I’ve had in high end Yiwu like Puerh-SK gushu rareness and apricot notes like a good young Naka. There are countless other flavors that unfold as well. I recommend you chase that dragon yourself. As for the qi, forget about it! I drank a 4g pot of HLH and an 8 gram pot of this and found myself dancing on my left ear for hours like a stoned roadrunner.

In the vintage guitar world, when comparing prewar Martin acoustics, one author likened the tone of a 14 fret model to a cannon and the 12 fret model to a silk hammer. That’s how I can best compare these teas. The Hai Lang Hao is a cannon. The Crimson Lotus is a silk hammer. Thanks to Glen and Lammu for making this available. Had I obtained a mere kilo of this tea I’d be tempted to keep it for myself…