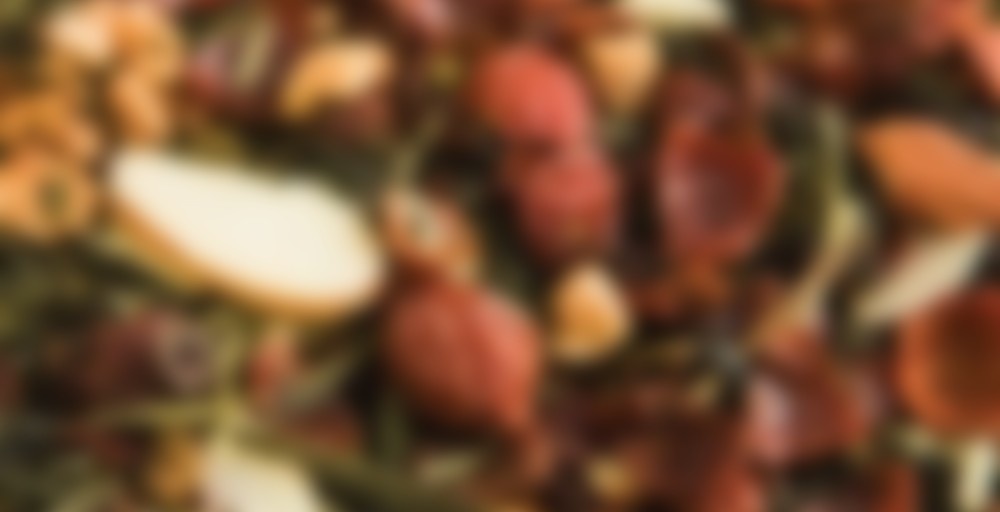 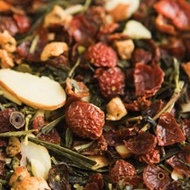 This beautiful sencha will win your heart with its alluring plum flavour. It’s pure elegance; each sip conveys the perfect balance of fruity sweetness and refreshing green tea. With juicy bursts of rosehip and gorgeous overtones of almond and apple, it’s not only delicious but also enticingly full of vitamin C. Why not let it keep you and your immune system company this fall?

Trying to keep up with the green tea and vitamin C. I have to say, my allergies are starting to fade. Which is a great, great relief.

That being said, I’m not crazy about this tea. I’m just not a green tea person, I guess. Not hot, at least. Like white teas, I find them more flavorful when cold.

Did you try a second steep? I’m the same as you, but the second one sometimes brings me ’round! :)

Not yet, but I haven’t thrown out the leaves yet, I might go for another steep this morning.

Here is another older one that I have brought to work in an effort to sip down. I am not a fan of green tea in general but some of the fruity blends with sencha aren’t too bad. I remember when we bought this it was marketed as similar to something else we liked at Davids – but I can’t for the life of me remember what that was anymore. This was stored in the zip pouch it came in and still has a lot of aroma, a mix of sweet and tart fruit, almost like dried cranberries if that helps.

Hot, it was lackluster. The green tea was very mild (that is a plus) but so was the fruit flavour. I am not a huge fan of plums so I wasn’t over the moon about the flavouring idea, but it didn’t taste like anything plum to me. Just generic. Where this really shines though (and very unexpectedly) is cold. I had a bit left in my mug which became room temperature and that is very flavourful . Again, not plum, but much more flavour than hot.

I do not tend to like iced tea but that could be the way to use this one up. I am leery of cold brewing green teas as I understand them to be finicky and I do not like astringency at all. I could certainly make a pot of this hot and put it aside to cool though. I might take it back home to do that with as I think the beau would really like it that way.

Tart, juicy then sweet in both fragrance and taste. The green tea is of good quality and rich flavor and the apple was fairly defined. I would have liked this to be more plummy, but it’s such a subtle flavor that it’s difficult to get a strong plum taste without making it seem fake. Overall, not bad.

I steeped this up with some long jing, as I got the last 20 grams at the store which was mostly nuts, apple, and green tea powder and bits.

The long jingo base was definitely present, and the Geisha Plum added a subtle sweetness to the overall tea. It made for a very green, grassy cup with fruity top notes, which was rather pleasant for sipping over morning duties (including the dreaded referencing!). I would have liked a touch more almond, although I was pleased that the almond was very natural and not at all a cloying baking essence type flavor.

Probably not a regular tea, but nice on occasion..

Not bad! Plum doesn’t sound particularly appealing to me, and this doesn’t smell all that great. I like the taste much better than the fragrance, thankfully. Fruity but not overly sweet.

I was quite surprised by this tea. I didn’t expect to really like it, but it’s actually pretty good!

Smelled like bubblegum, which is what drew me in, however, the flavour left me disappointed.

I brewed according to directions and still turned out rather weak with the plum flavour barely noticable above the green tea. Glad this was a limited tea because I won’t be restocking.

The fruity plum flavour is definitely very nice and yummy! However, the green tea itself is a bit bland, I wish the mix of flavours would come out richer.