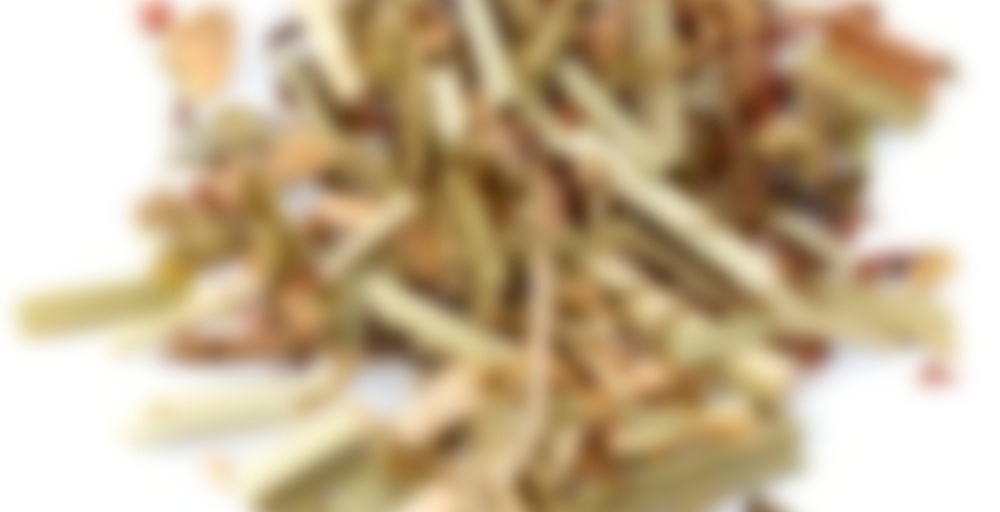 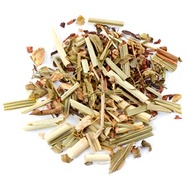 Our South African honeybush is an organic, fragrant, infusion made from the honey-scented flowers, leaves and stems of the cyclopia plant. Sweet and smooth, it combines perfectly with lemon verbena, lemongrass and ginger. With low levels of astringency and no caffeine, it’s fresh, natural, and you can drink it all day. Delicious hot or chilled. (MK Kosher)

Still sick sick sick, decided to go for a tea that I can “taste” whether or not I can actually taste things (i.e. the ginger is a sensation less than a flavour). Definitely not a big fan of this one though, I just wanted the ginger tonight. Unfortunately, gingery hot water came off more weirdly to me than I expected (but I still drank it, accompanied in the last half hour by some lovely NyQuil Sinus LiquiCaps that my boyfriend took me out to buy partway through our movie). Here’s hoping I improve soon! Sadly, the boy was also quite sniffly tonight, and I think he’s coming down with a cold as well, though we haven’t seen each other in five days. Poor us! :P

I hope you feel better soon! =)

Thanks guys! I slept for an incredible ~14 hours or so (with a few interruptions) and am feeling a fair bit better! The boy went to work and I suspect he’s the opposite… and he’s heading out tonight for a night of “Oktoberfest”! Poor guy! :P

eeep, feel better! David’s Ginger puerh used to be my trick, but it’s been awhile!

Thanks! Ginger Pu’erh would have been something I’d have gone for last night, but I don’t have any, and I really don’t feel like buying more tea, so the above (which I’m trying to drink down) was what I had to go for. I think I’m sadly lacking in gingery teas, actually, unless I have a Verdant blend with ginger in it (no idea if they even use ginger in blends).

Hope your feeling better! It took me a week to get better and it was awful… I couldn’t taste anything!

Drinking this as it begins to snow here, and by snow I mean it’s actually accumulating outside. Just in time for Halloween :( ah but it wouldn’t be Halloween in Canada if it didn’t snow! Ooh speaking of which, got my costume today, super hero theme this year for me and the boy! Should be a good time.

Anyways, this tea is cozy and smelling like fresh honey as always. Still enjoyable :)

Boiling 6 min, 0 sec
Yours I Like This
9 likes
4 comments
Edit

I love Halloween costumes! Were you dressed as a particular superhero?

Yeah I was wonder woman this year :D

It was tons of fun :) I love Halloween!

Another tea from the magical cupboard at work. It was after noon and I just wanted a break. I didn’t really want a pick me up, I was barely trying to get through the day, didn’t need to get even more excited about having to be there another four hours. :)

The label was a bright friendly yellow and I thought “ok, why not”, not expecting much. My best bet was to throw in some ice cubes after steeping and at least have something to quench the thirst.

The flavour was not at all the lemon I feared. You taste more honeybush with some ginger than lemon. Also didn’t need a whole lot of sugar. I’m finally at the point where I’m able to dial back on the sugar and still be able to enjoy the tea. yay! I can’t really articulate much more than that, it’s not like it was a complex tea or anything. And I was somewhat distracted because I was at work, you know, working.

The tea was nothing to write home about but since I had very low expectations, I was pleasantly surprised!

Oh and… I nearly fell off the chair when some woman who came in the kitchen to make some tea grabbed the bag of this, carefully examined the label, opened, sniffed it, and dumped a teaspoon worth in her cup. No filter, no nothing. She poured some water, oblivious to steeping parameters, waited maybe a minute if that, and proceeded to fish the leaves out with a teaspoon. That was her idea of making tea, obviously. Waste of good tea if you ask me.

Haha. Sounds like she’d tried it that way before to! Oh man – everyone should have a steeping basket – it just makes life so much simpler.

How much flavour could she have gotten with barely hot water and a minute of steeping? Is a freakin DT honeybush! It’s not some premium tea where you’re to steep 30 seconds

I wish my workplace had a magical tea cupboard! ;)

First note: if you’re new to honeybush, taste the steeped tisane before adding sweetener of any kind. It’s called honeybush for a really good reason.

Honeybush sweetness balanced the lemon grass. I enjoy the additional sweet grassy notes form the lemon grass. And the ginger is soft, not blazin hot as in the Electric Lemon blend — soft, but not subtle.

I sipped this before bed last night and found it soothed a (new!) sore throat. Didn’t kill all the sore throat pain, but definitely eased it. The steam, plus the scents of lemon and ginger, opened up my nose a bit, and my nose wasn’t even stuffy. The taste is sweet and welcoming. Jusy might have me a new go-to tisane while I wait (and wait, and wait) for the return of Super Chocolate.

watching West of Memphis. in my robe.
second to last cup of this tea left.
quality time with my kindle is next.

I am so sick and have been craaving ginger all day, forgetting I had this. I made it strong and steeped it for about 7 minutes. Definitely has me sweating out some of my baddies. I think I’ll be drinking this most of the day tomorrow.

This tea is amazing if you are feeling under the weather. Or even for just a mid afternoon break.
It’s very soothing and calming.

I have a container of this tea and I drink it all the time in the afternoon and late evening. It’s so soothing.

I was pleasantly surprised by this tea! I had never tried a honeybush based tea and I was unsure what it would taste like. To my surprise, it was nicely mild and sweet. I got slight hints of lemon and ginger which melded with the honeybush to make for a really nice mellow tea! I was very impressed this this tea. It is not something I would reach for every day, but it is a nice change for once in a while!

A rainy, rainy late afternoon: what to prepare in my blue teapot? I got a sample of this tea the other day. I thought I knew exactly what it would taste like. Lemon ginger? Been there, drank that. Honeybush? Yes, me and Honeybush go way back. So, I was amazed at how much I lurve this tisane! Open the packet and mmmm what a fragrance. The infusion tastes exactly as it smells: so delicious. The lemony and gingery flavors are enhanced by the honeybush, which gives the tea a naturally sweet taste. Yes, I’ve tasted many a lemony gingery tisane but this one I think has something special: a sweet balance. xo

Hello, old friend, haven’t had you in years.

I visited the in laws this weekend (they are a 2.5-3h drive from us, and live right on a lake in a quaint little town of about 3k people). Perfect time for catching up, drinking tea, reading books, taking walks, and taking naps. Would have done more outdoorsy things but it SNOWED this weekend. Yes it is May 15th. Welcome to Northwestern Ontario ;).

My mother-in law and I were discussing tea and what our preferences are. She gave me a bit of Mango Tumeric which I like (she can’t handle tumeric) and she was looking through teas in her back room. She asked if I has this one (I replied, no, this one was discontinued 3-4 years ago) she said she hasn’t been drinking it often and gave me what came out to 1.5 tins worth. This tea was an absolute favourite of mine when I started drinking tea 4 years ago and was really disheartened when they discontinued it. So i was excited to have it, yet concerned about rancidity.

After brewing it up and drinking a full cup I was still pretty impressed with this tea. I do believe the honeybush and lemongrass were a bit stale as the taste was mostly stevia (although not cloyingly sweet) with whatever flavourings they put in it (ginger has always been mild with this tea, which I appreciate). What I do notice is that my tastes have changed because I don’t think the stevia was necessary (I’m just glad it wasn’t strong!) and I was waiting for the more woody taste of the honeybush and more lemony tastes from the lemongrass and myrtle. So with that being said I dropped my rating from 95 to 85.

Either way, this tea is still an old friend and I’ll have no troubles using it up. Now that I have a full ingredients list for this blend, I plan on making my own honeybush lemon ginger blend my own way.

old tatsing note from 4 years ago: One of my favourite teas. I even ended up buying a 250 gram bag online from DAVIDs! It tastes nice and from what I hear the ingredients are supposed to be healthy. This is the tea I drink all day when I want something “plainer” (in comparison to say, a juice tea)but without caffeine.

Wow, what a wonderful way for this tea to find its way back to you :)