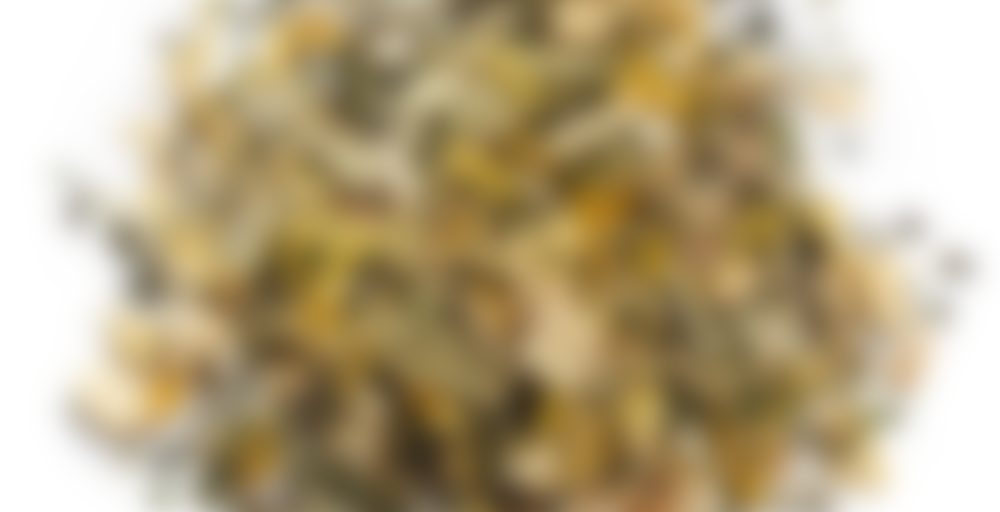 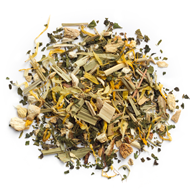 There’s something special about nettle leaves – according to Celtic lore, they have magical powers. Try putting them in your pockets to protect yourself from lightning, or in your shoes to stay out of danger. You can even make a broom from nettle leaves to sweep evil out of your house. So it goes without saying that with a nettle leaf tea in your cup, it’s going to be a good day. Taste the magic for yourself in this delicately sweet herbal blend of nettle leaves with grapefruit zest, ginger and lemongrass.

So I’ve been taking prescription eye drops for my darn allergies for the past week (eyes were a horrendous red at this time last week lol) and have been sneezing and all that fun from it being spring. So tonight, after reading on a note somewhere (I think it was Terri HarpLady that said it) that nettles are awesome for allergies, i found my one tea with nettles and made a cup. I contemplated cold brewing some for tomorrow but instead put another mango tea in the fridge. This tea is not my favorite, it’s very herby and thirst quenching, but not an exciting flavor, but if it helps my allergies, i might have to get a bit more. I’m hopefully going to davidstea tomorrow to get the summer collection and an iced tea pitcher, so I hope I make up my mind about this tea by then. If not, I still have a few cups left lol. See previous notes :)

Yeah, it’s not my favorite flavor, but it’s also not grocely bitter, so it’s tolerable. Ideally you need to brew it strong (cold brew won’t really get the ‘medicine out of the leaves as well). I use a cup of leaf to a qt of water & let it steep 2-8 hours, then strain & refrig if you want it cold. I was making mine before bed, letting it stereo covered over night, & straining it in the morning. The last couple days I’ve been brewing a quarter cup of leave in a 12 oz mug in the morning, letting it sit a few hours & then drinking it. It’s a lot of leaf, it’s very vegetal, but it helps.

I’m proud of you for giving it a try, Lena!

So I used the last of my sample bag of this to make a thermos of goodness for work and try to decide if it’s worth restocking. Conclusion? While tasty enough, this tea didn’t stand out enough for me to make room in my cupboard. Sadness. I think I just want to like it due to the call back to “Celtic lore” in the description XD. This blend is tasty, but ultimately forgettable.

This was recommended to me by DAVIDsTEA customer service when I asked for an apple-free blend that would taste similar to Midsummer Night’s Dream or Pink Flamingo.

I don’t know what they were thinking. While it doesn’t list it in the ingredients, this tastes like camomile or clover mixed with a little bit of grapefruit and a tiny sliver of ginger.

It’s just plain weird, but as the 50g bag I ordered was STUFFED (it’s very light and fluffy) I have a lot to work through. I wish they sold smaller quantities online!

I am not sure what to say about this tea. There is a licorice-like note but no licorice in it. My guess is the lemongrass and grapefruit peel. I’m trying this though, for the health benefits of the nettle (some specific ones). In past, on individual occasions, I have had nettle (allergy supplement with bromelain? and as a tea) and on both occasions I have itched afterward, even though they say to use nettles to relieve itching generally. I know contact with nettles in the wild can lead to itching though, so it seems a bit strange. My manager at work, who is a strong advocate of nettle tea, said that the itching could be a flushing of toxins coming up to the surface. This could be true, so I opted to get a small amount of this tea to test. I figure 3-4 cups is enough to test with, and if I am still itching after drinking it, then I just ought to avoid it in the future. I’ve already begun itching, not super duper crazy annoying itching, but just fairly annoying itching. I don’t want to go through this on a regular basis in order to get the specific health benefits I’m after…there are alternatives.

I’m not going to rate this because I think it unfair to use my itching from the tea against it, but for flavour, it isn’t my favourite, though I’d be willing to drink it regularly more for health benefits as a tonic, so long as the itching goes away after a few cups.

funny, I’ve avoided nettle tea because my doc says that since I am allergic to jasmine and bergamot, nettle and lavender may be the same for me being that they are “cousins”!

There’s something terrifically settling about this tea. The taste is neutral to mildly unpleasant, but this one just isn’t about the taste.

I love that something that doesn’t taste that good can be settling!

so i went to David’s tea and picked 10 g of all of their new teas to try them, no more buying 25g and then getting stuck with thing i hate.

steeped it smells like Irish spring, and the liqueur is a weird greenish yellow color.

Time to taste: the grapefruit is there but very weak, then there’s the taste of the nettle leaves and i associate it with soap, so i’m tasting soap…

I actually dont mind this tea. It tastes mostly citrusy and like ginger to me. In the aftertaste I get a hint of floral. This tea isnt sweet at all, which I actually like. This tea is very different but its growing on me each cup.

Day 99 of may 101 days of DAVIDsTEA challenge. (Clearing up the backlog, again.)

This tastes rather… herby. Which is not a bad thing, just different than I’m used to. I actually quite liked it — it has a nice sweet note to it, behind the main… herby flavour.

I think I need a bit more experience with this sort of tisane, but still, it was a good experience.

It resteeped nicely as well — I got two good steeps and onen… weaker one out of my tea-ball!

ARGHHHHHHHHH!
I thought I was so close to discovering my legendary grapefruit tea. NOPE!
This was nasty, sorry guys. It was so vegetative, and not in the good way that green tea is – In a weird, bitter, stemmy kind of way. It was almost sour – but not in the fabulous way that grapefruit is (you couldn’t really taste any grapefruit under the nettle leaf). Sorry to be the first to review it – and give a negative review – but I don’t think there’s any way to make this tea good. Even the dry leaves smell just plain wrong – too much like weeds. I didn’t finish the cup.

I totally agree with you on this tea.

If you’re looking for a grapefruit tea I have a suggestion for you. Have you ever tried Harney and Sons White Vanilla Grapefruit?

I was drinking this tea prior to finding DavidsTea and now only drink tea from Davids.

I haven’t tried it! It’s now on my list to try, but I have no idea where to get it from!

Nothing really special to me. If I categorize a tea to be herbal, they generally smell the same to me.